After working on deer portraits, I decided to change costumes and do some jumping. Unfortunately, my office/studio gets really hot during the day when it’s hot outside, so I couldn’t leap for long as I timed things badly and was jumping about at the hottest part of the day. I still got some good shots, just didn’t get as many as I usually do. I’m learning to take less anyway, since I can only process so many photos from the same shoot before I get bored. There’s no need for me to take 300 shots each time, it’s just I have so much more to work with when I do; but when it’s 100 degrees outside, and about 80 degrees in my studio, well, I just can’t handle too much bandying about in a hot wig and layers of costumery. So I made this part quick and kept the fan on high to try and reduce the heat. 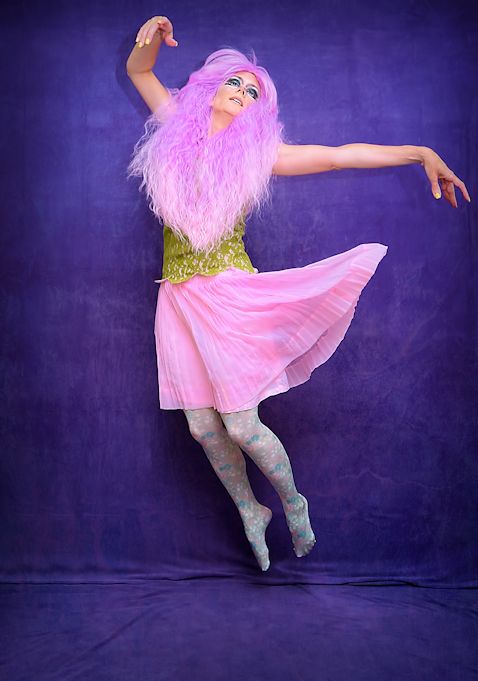 Is this a fab dress or what? It’s like a cross-dressing costume for Peter Pan.

I wanted to play around with different movement and camera focus some, since I tend to rely a lot on fully zoomed-out full-body jump shots. I thought it might be interesting to bring the focus in and just capture parts of me in motion; it irritated me a little as I feel I probably missed cool movement this way and am still more interested in the shapes the entire body makes, but still. Gotta change things up a bit when I can.

I felt this one needed to be B&W for some reason. And that little shot of the floral tights bugs a bit; it takes away from the seriousness of the shot, but cropping out the leg entirely ruined the movement of it so I had to keep it. 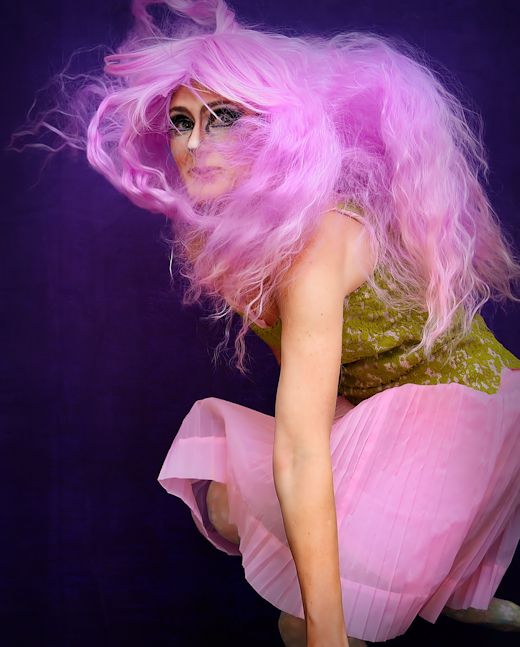 I love this one – I look like some freaky combination of a My Little Pony and a day-glo extra from Cats. The wig is another Gothic Lolita one; not sure you can tell but it transitions from purple to pink on the ends.

I also wanted to play around with leaping in such a manner that I might flip the photo on its side and look like I was falling, or flying, or something. This hasn’t gone so well for me in the past but I thought I’d give it another shot by trying some jumps with a falling motion to my body. Interestingly, in the leaps where I tried this, I kept visualizing me flipping the photos over to the left, so when playing around with editing I kept flipping everything that way and it wasn’t working. Then I got the idea (duh) to flip to the right and it looked a little better. Still not sure this works but maybe that’s because I know I was leaping straight up and can’t stop “seeing” it when I look at it. Who knows. Also, it’s a bitch to edit the floor out of the shot but that has to be done or the effect is ruined, so I probably won’t try this with too many photos just yet. Or maybe I will, who knows. I just know it took twice as long to edit this one, and I had to use several extra layers of texture to conceal lines that would indicate what was really going on.

Click on this one to see a better shot with more clarity. For some reason it looks crappy when inserted into the post.

Tomorrow I’ll share the last “look” from this shoot, although I’ve got lots more of both these and yesterday’s costumes to edit. I’ve also kept my studio set up in case I want to shoot anything else on the holiday. I do have lots of grocery store pics to share at some point since that’s what I did Sunday.

Kinda cheesy background but I thought the movement of the stars worked well with the shape my body made.

11 thoughts on “Photoshoot Round 2”