I got a lot of enthusiastic responses when I showed people the flipped photo that I shared in Saturday’s post; many comments indicated that people didn’t realize I flipped an image but actually thought I somehow pulled off a backflip in the shot. This kinda cracked me up – but that was the effect I was going for, so it’s nice to know I pulled it off better than I thought I did.

It inspired me to share as much of the editing process as I could here, so people could see how it was done. To me it seemed really obvious, but that’s because I know what I did, so when I look at the photo I still see it. Unfortunately, I  don’t save every step of a photo as I edit it (if I knew Photoshop I wouldn’t be saving any alternate files at all) but I can at least show some of the progress, so here goes:

Welp, there it is y’all – the original, unretouched photo. This is probably the only time you will see one of these on this blog. Normally, before a photo is converted from RAW to a .TIFF file, I run it through Photo Ninja, where I color correct/enhance, crop, correct chromatic aberration, demosaic, etc. (I can’t recommend Photo Ninja enough for those last two – I get an amazing level of detail out of those two processes on this program). With this one, I did nothing but convert it, and I admit it made my fingers itch a bit not to correct anything. Also, there’s a surprisingly small amount of crap in this photo to edit out compared to my usual: the remote is usually thrown on the floor somewhere (I think in this shot I’d managed to put it on that little table that is always sitting to the side of my setup to hold random things – my glasses, sometimes the remote, a wig brush) and there is usually more white space showing where the backdrop doesn’t cover the wall. Sometimes there’s also a dog tail or the edge of a fan showing up somewhere in the foreground, but not here – so not a bad original actually. But, my hands went all wonky and the skirt didn’t have an interesting flow, so it was still a reject shot, which is why I eventually decided to mess with it and see what happened. 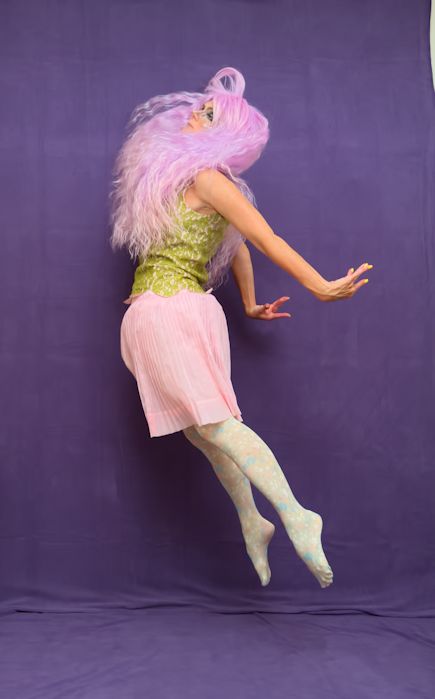 This is the original after I’ve run it through the Photo Ninja process, so you can see the effect of the enhanced color and the added detail and clarity. You can also see how color correction got rid of the pinkish tint the original had – most noticeable in my skin tone. After giving it the Photo Ninja treatment and converting it to a .TIFF file so as not to reduce quality while editing, I used Paint Shop Pro to edit out the table using the clone brush; I also use PSP to enhance color and contrast further, as well as use a skin softener filter the program has that I particularly like. You can still see a bit of the white wall in the upper corner there, but I edited that out later.

Here it is flipped. I cropped it a bit tighter, which reduced clarity a bit but I felt it had to be done to give the right effect, and I removed the horizon line using Photoshop’s Patch tool. And yes, this is where things start to get weird, if they weren’t already, because all of these processes I use through different cheap and/or free programs could all be done in Photoshop, but I never learned how to do them and instead have cobbled together my own system that works for me. I realize that’s probably ridiculous, but they’re my photos so shut up already. Moving on.

I still felt there was a dark shadow at the horizon line that indicated where it was, so I used yet another program I love, Snapseed, to lighten that area. I told you I had a weird system. Anyway, I adore a few of Snapseed’s photo editing processes, and it sucks that the company is no longer offering the PC software I managed to snag a few years ago; sadly, it is now available only as a mobile app. This program has a sharpening/structure tool that I think is awesome;, it has a preset that always gets it right without overdoing anything, and adds a fantastic level of clarity to my photos at the touch of a button (I have a thing about clarity). If you scroll back up and compare the photo above to the one below – just looking at the subject and ignoring the background (which has also been heavily edited in this next shot) – I think you can see the difference in detail, and at this size, the photo isn’t nearly as detailed as the full quality version. I think sharpening is my favorite editing step, because when I hit that button the image really comes to life for me:

Step whatever (many steps combined here): 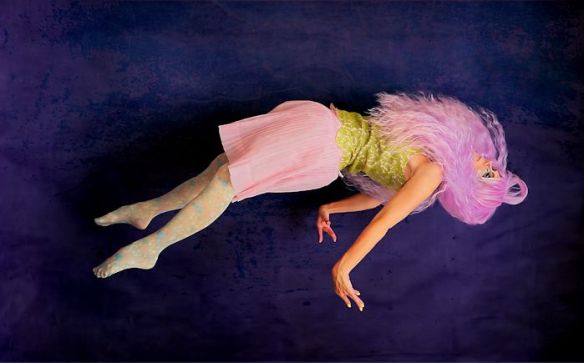 I’ve already raved about the added clarity and sharpness, so the other thing I’ll mention is how I moved the file back into Paint Shop Pro to add a few layers of texture to the background. I wanted to further conceal the horizon line (which, as I mentioned previously, I’d used Snapseed to lighten, but I could still see it) and get rid of some of the creases you can see in the backdrop. I also wanted to use the textures to enhance the feeling of someone floating, and I think these worked out nicely. I get most of my textures from this website – I started out with the freebies but have since purchased several of their packaged sets to add depth to my backgrounds as well as conceal flaws in them like the creases and lines I wanted to cover here.

So, there you go. There’s how I managed to do a backflip in my very own studio, without killing myself in the process.