I mentioned in yesterday’s post that I’d had trouble editing the background of some of my flipped photos. I worked on correcting the problem this evening, so I figured I’d go ahead and show you what I was talking about that had been bugging me as well as share the final results – so here goes.

Since I was rotating these shots, I had to crop them in an odd way to get the composition right, and as a result there was a lot of space added to them that wasn’t in the original. I know I am not articulating that very well, but basically, I took photos that were horizontal rectangles and cropped them into squares, which added a lot of tacked-on gray space that wasn’t in the original shot:

I then had to use a clone tool to cover all this gray with the white background. While this sounds easy enough, a solid white background actually has an astounding amount of variation in shade, and it’s hard to clone all that gray space so it blends properly. I am sure it’s possible, but I don’t have the skill to pull it off every time. And as it turns out, white is way more difficult than the purple I used last time I flipped photos. Anyway, after cloning white space onto the gray and pulling the shot into Photoshop to try and blend the cloned areas using the patch tool, the end result was, well, patchy and smudged, as if the backdrop itself were dirty. It’s not terribly noticeable in the first shot, so I circled the bits that were bothering me:

I also had a harder time using textures than usual with these shots because tulle is very transparent, and it wasn’t easy to select the subject and erase the texture from it (I wanted to be lazy with these two shots and leave a white background with no texture, but it was not to be). In the end, I did add texture to conceal the smudges:

The final shot. Still smudged, but now it looks more like part of the texture.

I think the whole process is more clear in this next shot, where you can definitely see the muddiness of the background that was bothering me. But the first thing you can see is that I tilted the hell out of this shot. I wanted my upper body to be parallel to the imaginary horizon line, so I did quite a bit of horizontal rotation after flipping: 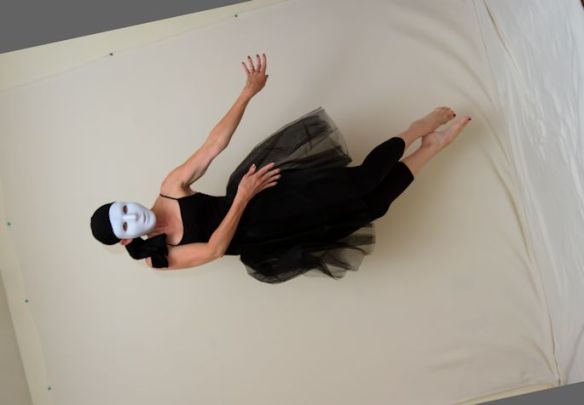 Cloning and patching out all that gray, plus the differences in shading between the blanket on the floor, the sheet on the wall, and the plaster, made for a seriously dirty looking background. If you REALLY want to see how bad it was, tilt your laptop screen back a bit for this one, and – YUK! – you can see more detail of the poor blending job (and yes, this is after editing and fixing it to the best of my ability): 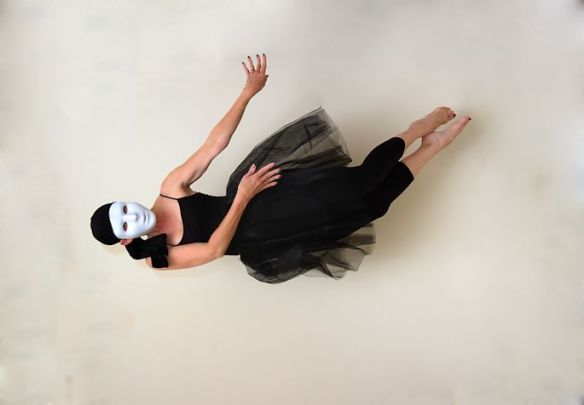 No WAY that was tolerable, so I added the same texture as the first picture to disguise it. Took more time, but it did solve the problem:

As I mentioned before, this flipping photos stuff involves processes I don’t have to use for straight-on jumps, and I started to get tired of all the cloning and patching and blending and texturing; in the future when I do this, perhaps I can at least avoid a white background as it’s trickier to edit. Either that or forgo the tulle so I can add texture behind the subject without so much hassle.