Had to take our 15 year old cat, Ramone, to the vet this weekend to get his monthly steriod shot. He’s lost a lot of weight the last six months and was having a hard time keeping his food down, but the shots seem to help. Ramone’s a pretty good cat when being hauled to the vet, but like any cat he’s less than thrilled about the whole experience. So of course I took pictures while we were there.

This first one makes it look like his carrier is really tiny, but I promise it isn’t. It’s just very floppy and was a little caved in, plus he squishes himself as far back into the corner as he can when when anyone tries to take him out of it at the vet’s office (and also when I’m trying to take pictures):

Is this bugging you? I’m not touching you…

I don’t really have anything to say  about this one, except that once again it may make him look more miserable than he really was. In actuality he was bumping his face up against the mesh so I could scratch his head.

And, because there was not much to photograph in the vet’s office, here’s another shot of Ramone in his carrier.

And for something completely different, the principal where I work has a daughter who teaches some film classes there, and she is a huge animal lover – to the extent that she regularly brings her pets up to the school. I don’t think anyone else could get away with this, but being the boss’s daughter she’s allowed. She recently acquired a puppy, and I have to admit that as generally weird as I find the idea of teaching every day with a puppy leash attached to one’s belt loop, I find this little guy adorable and tend to rush over to him every chance I get to give him a quick cuddle. Maybe I should use him in counseling sessions to speed things along with the students; cuddling a sweet baby dog is pretty healing.

He wouldn’t keep still for a photo so this is the best I could do.

In other random shots, I wrote recently about how I took photos around my campus to print and hang in an attempt to spruce up my office – well, they finally came in today. Someone else who works at the school had contacts with a printing company that agreed to print up some of my shots; I had them printed on canvas and stretched so they’d be both free (no framing necessary) and easy to hang. They didn’t come out the highest quality, and they were all these weird different dimensions because I forgot to specify what size I wanted them to be, but whatever. I was able to hang them on the walls so they aren’t blank anymore – and did I mention it was free? – so I’m happy. 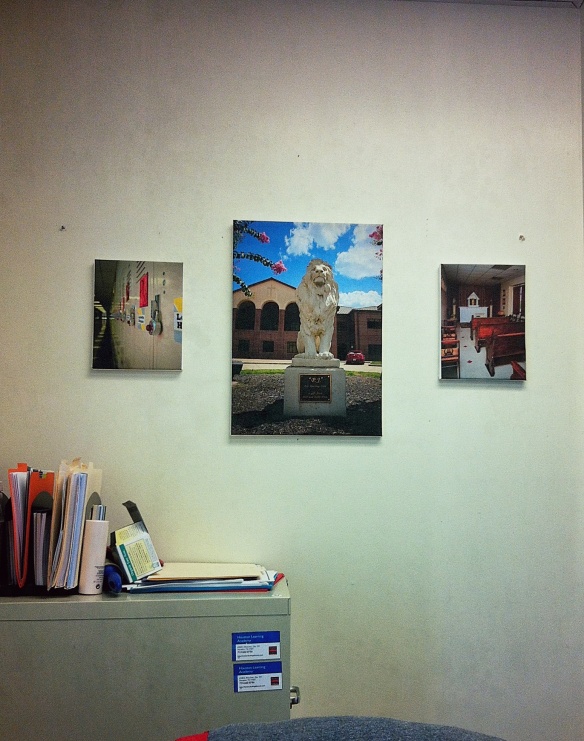 I don’t think they’re crooked, I think the photo is. But who knows.

Yes, those are stuffed animals in my chair. Even high school students need to snuggle a Pillow Pet sometimes.

Yep, I edited the name of the school out of this photo again. And below it is a memo board I bought from ModCloth.com – I thought it looked so cool and very much like an old television set, but unfortunately it was only half the size I thought it would be. Still bummed about that.

Interestingly (or maybe not), this is the first time I ever saw any of my photos in  print. As I said before, they were rather sloppily done, and if I ever decided to print up some shots for my own use I’d be sure they were higher quality, but I’ve always preferred prints without frames so I do like the canvas aspect. Plus, I’m cheap, and it’s cheaper this way and easier to hang. But these didn’t exactly inspire me to rush home and pick more shots to get printed. Maybe it’s because I’m not a decorator at all, and in general blank walls don’t bother me,  but I’m not all that anxious to see a bunch of my stuff in print. Having it on hard drives is good enough for me, quite honestly. At least for now.