First of all – holy cow, have I taken a load of photos this month! Even before Christmas Eve and my recent adventures with the 85mm, I had the feeling I was dealing with an unusually  high volume of photos in my December folder (which is how I organize my shots, if you can call it organization – you should see me trying to find an old photo; it’s tragic). But today alone I took SIX HUNDRED AND THIRTY FOUR photos. I’m tired just thinking about it. Of course, many of those shots were blurry and useless due to trying to use the 85mm again, but still. That may not be much when you’re shooting other people, but those were all self-portraits!

This fact motivated me to add up just how many shots I’ve taken this month, and I can now tell you that I’ve taken well over 2,000 pictures since December first. It’s so overwhelming, I’m sure I’m going to forget to share some here or upload them to Flickr, not to mention all the decent shots that won’t get edited because I’ve already moved on to the next set. I was actually already behind on uploading photos; most photos I process get shared here, but I only upload one photo a day at Flickr (for various reasons), and I still have some from June that I’ve yet to post. I am either going to have to do a photodump where I just upload a ton one Saturday afternoon, or maybe a collage where I collect some of that older stuff that didn’t thrill me enough to upload at the time, but I don’t want to go completely ignored. I may work on that.

For now, I want to share some of the 600 or so pics I took today. I tried to move outside again and use the 85mm for some outfit shots – I wanted to play in the new stuff I got over Christmas, and I also like to upload photos of ModCloth’s clothes to their style gallery. So, these are pretty editorial shots, nothing arty here – but the clothes are pretty and I wore many different wigs, so there’s that.

But first of all, check out this makeup! I was pretty proud of this attempt, as I managed to do it fairly quickly and without following any sort of tutorial. I may actually be getting the hang of this (although, after thoroughly mangling two sets of false lashes, I said to hell with it and just went with loads of mascara. I’ll never get the hang of applying those damn things). As with almost all photos you’ll see here today, this was taken with my 85mm:

The wig is called “Yaya,” and it’s made by Sepia. It’s discontinued but I managed to snag one recently on a clearance sale. Cute, but a terrible plastic skin part makes it look a little fakey. And yes, that is another fuzzy sweater. I love fuzzy!

So here’s how this shoot went down: after applying the face and taking some portraits while the makeup was still fresh, I gussied up in my first outfit and ventured out into the backyard. It was about 3 PM by this time because I am taking advantage of my vacation and sleeping late ( I didn’t sleep that late, but I spent the whole morning puttering around, then had to run a few errands and eat lunch, then an hour to apply the face and set up and another 30 minutes taking the portrait shots. So there). The light was pretty weak today as it was cloudy, which I actually prefer because I struggle with lighting in outdoor situations (as you’ll see shortly), so I thought things might go OK.

But – mistake #1 was making my first go at it with the outfit pictured below. I’d picked at least seven different outfits I wanted to photograph (which was way too ambitious, although I managed to slog my way through all of them, one way or another) and since this one made me feel the silliest, I chose to do it first while my husband was napping so I wouldn’t feel even sillier. The problem was the heels – it really takes me some time to figure out where to set up the tripod using this unfamiliar lens that needs a lot of space between the camera and me to get my full body into the shot, so I had to do a lot of trial and error – setting up the tripod, setting the focus, walking over to where I think the camera’s focus is going to be, taking the shot, walking back to see if I actually stood in the right place, then walking back to my spot to re-adjust as needed. And all of that back and forth in a tight skirt and five inch heels, even if they are wedges, is no kind of fun; in fact, it got downright irritating pretty damn quick. I would have been better off wearing some flats and a flowy skirt while getting a feel for the lens, but by the time I realized this, of course, the outfit was on and I had to soldier on.

Doug was baffled that I’d take photos of the backyard when it was covered with leaves, but I liked them.

And oh Lord, problem #2. Putting aside the aforementioned numerous out of focus shots due to using a single focal point to get the job done with this lens, I completely forgot about the terrible chromatic aberration problem this lens has. I am not capable of explaining what chromatic aberration is, but I can show you what it looks like – purple or green that appears to “outline” parts of a photo, such as the silver handle of the parasol and my belt buckle in the photo below. Both of these were ringed with purple right out of the camera – and upon closer inspection, so was pretty much everything else. It wasn’t until the photos were done and I went to edit them that I remembered this issue – it’s a known problem with this lens, and most people say it isn’t any better on the $2,000 version (and yeah, you can also see in that before shot all of the wrinkles I smoothed out of the final version, LOL).

I think you can see all the purple outlining the metal as well as the umbrella, and parts of my skirt and my arms, in the first photo – the belt buckle in particular looks completely purple. I corrected it as best I could, but I didn’t do a great job, and it took awhile.

Why it does this, I am not technical enough to understand, but I do need to remember that it happens and stop down next time I use this lens instead of foolishly keeping it set at f/1.8 (for this an other reasons I should have considered but am not used to thinking about). As it is, all of the photos I took outside using it have this problem, and it’s why ultimately I didn’t edit many of them,  because it’s a pain for me to correct and I wasn’t up for doing it too many times. Not a huge loss in the end, because only three of my seven outfits made it out the back door anyway; I ended up taking the bulk of them inside using my familar setup and my familiar lens. 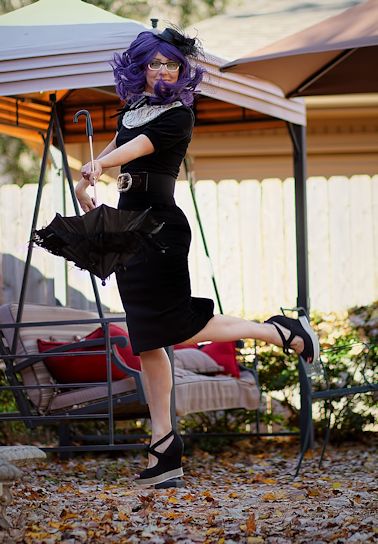 I did pull off a jump or two though.

Now I swear, I am not being super-picky about the chromatic aberration thing; it’s something any photographer worth his or her salt would avoid or correct lest they come across like a complete novice. I didn’t notice it when I took shots yesterday because it wasn’t as extreme; the metal in these shots really emphasized it and then I started noticing it everywhere. Doesn’t mean I can’t use this lens, I’ve just got to remember to stop down next time. Ah, the wonderful learning curve with new (or so old they’re new) lenses! And also – that fence behind me was way too bright with the sun hitting it. Something to remember next time I venture outside – gotta avoid that spot at this particular time of day. Anyway, moving on.

The shots in my new tulle dress went better; chromatic aberration has something to do with high contrast, and these were much softer colors that blended with the surroundings better. It was still there around my shoes and in the leaves, mostly, but I was able to accept it and just edit the shots without so much fussing over it. And gosh, what a pretty dress this is! I actually had a lot of nice shots with this one – I guess that first outfit didn’t lend itself to much movement, so I didn’t really know what to do. But give me something flowy and I’m off to the races.

Tried to Photoshop the remote out of my hand, but it made me look really creepy, like I was trying to claw someone’s eyes out.

No idea why, but I wanted a shot of me walking away from the camera. And see how the light has shifted and that fence is no longer blindingly bright? Much, much better.

Love the color of this dress, too. A gorgeous taupe-y brown.

I haven’t edited the other outfit I shot outdoors yet, and who knows how long it’s going to take me to play with all this stuff. As it is, it’s 2:30 AM and I’m still typing up this blog post. So I may have to put the brakes on shooting for awhile until I catch up. But I say that all the time, don’t I?

Anyway, after I managed to get the outside shots done, I took a long break to edit some shots and see how it was going. That was a bit discouraging, since I didn’t get as much as I thought I would, so I kept the photography makeup on, ate dinner, then decided to pull out the trusty 17-40mm and studio lighting and shoot the rest of the outfits in my familiar setting. Needless to say, my love for the 17-40 was renewed; after struggling with the much prettier but far more temperamental 85, it was a heavenly to strap that puppy on the camera body and let the magic happen. Everything in focus, no weird color issues, and clarity by the truckload. I easily managed to knock out the four other outfits and threw a few more in to boot. Not to mention doing some jumping.

I’ve only edited the pink sweater pics from this portion of the day’s picture-taking festivities, however – I want to knock the 85mm outdoor stuff out of the way first, since it takes more time and I have to do all sorts of editing techniques that are not second nature to me. But I did a few of these just because I enjoyed the color here so much (the cardigan – which is fuzzy, of course! – is what’s new; I’ve had that fabulous scarf for years, and it’s quite accustomed to being photographed).

This was the last outfit I shot today, and I can tell I was pretty tired of the whole thing by how unvaried the poses are. I basically looked in a different direction with my eyes and that’s about it. I started shooting at 3 PM, remember – and at 10 PM I was finally wrapping it up. Ridiculous? Maybe. But I got a lot of nice shots out it- especially the studio stuff, but some nice outdoors shots too. 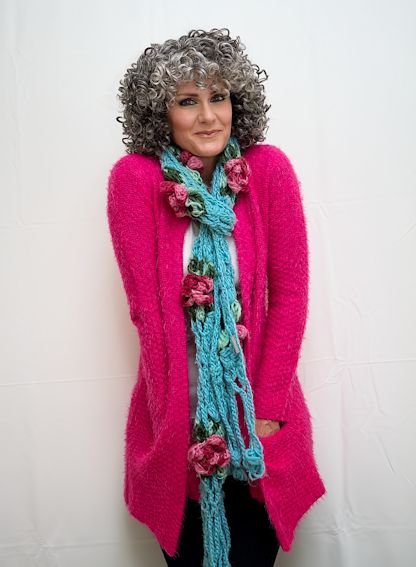 So, so much more to come. I haven’t even shared all the photos from Christmas Eve yet! So much to share, so little time.