This is another post full of “me” shots – taken outside in natural light, using the 85mm to experiment with it a little more.

By the way, the wig I’m wearing in these is new, but since I’m no longer reviewing them on this blog, I’ll link to the blog where I did write a review – it’s called Real Life Wigs and is run by a friend of mine. A lot of the older information on that site is from the wig blog I used to run back in the day; Stacey took it and used her skills to create a much more comprehensive and manageable site. From time to time, I still write up reviews over there, but of course I no longer make videos of the wigs I buy. The wig I wore in these shots is called Seville by Noriko – it’s a new style, and while it is pretty, if you check out the review you can also see I have some complaints about it. Moving on. 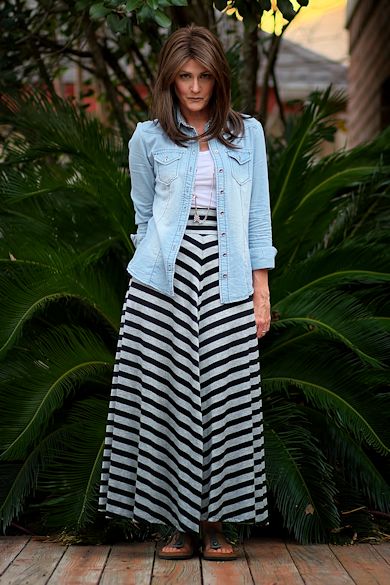 As I mentioned in my last post, as my attitude towards my job has improved, so has my interest in my closet. To that end, last week I opened up a second Pinterest account so I can keep track of great makeup I find and fabulous outfits I come across. I was on Pinterest a while back and couldn’t get into it; I really had nothing I wanted to pin personally and everyone I followed was constantly pinning recipes and home decorating ideas, and I think it’s been well-established here that those are two things I couldn’t give a shit less about. But what with buying all these maxi skirts and dresses over the Christmas break, I needed ideas regarding how to wear them, and every time I did a Google search for images I ended up clicking some link that led me to Pinterest, so I eventually figured what the hell and opened up another account. Now I get that the secret is not to just follow your friends, but people who are pinning what you want to see, and that pinning isn’t the key to finding Pinterest useful but following the proper boards is. So now, I am following anyone with boards about maxi skirts, drag queens, wigs, makeup, or what is known as “advanced style” (women over, say, 55 with killer fashion sense. They inspire me).

This outfit is straight lifted from someone else’s pin on Pinterest. I got that skirt for eleven dollars while out shopping at Dillard’s for my husband’s pants. It was so cheap, I couldn’t resist, and in spite of being long and knit it fit me nicely. But when I got home, I realized I had no idea what to do with it. It was finding the pin that inspired this outfit that prompted me to sign up for Pinterest again. My board about maxi skirts is brimming with ideas already, which is of course tempting me to buy more crap. 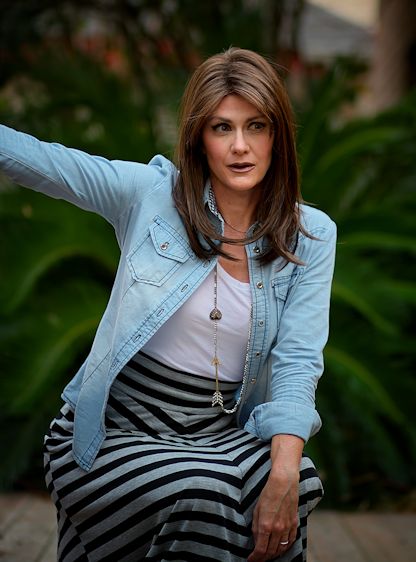 The chambray shirt I picked up recently from Downeast Basics, which is a site with great clothes that are often super-cheap but still well made. They are basics, as the name implies, and everything I’ve bought from there has become a staple. I think every wardrobe should have at least one chambray button-up shirt, because it goes with absolutely everything and can easily be worn jacket fashion over a cami or shell (I do not look good in button-up shirts; they’re just all wrong for me for reasons I cannot ascertain. But if I wear them open with something underneath, they’re okay).

On another note, I am really enjoying playing around with these outfit shots, but I wonder if they’re boring as hell to other people. They certainly don’t have the ‘art’ element my usual stuff does, so I get a little nervous about taking and sharing all of these. Then again, my creative life has always been my own to do with as I see fit; I’ve never answered to anyone else about what I do creatively and I don’t want to start now. I feel like this stuff is a little lame, most likely, but as I’ve always believed about creative endeavors, I think following this path of current interest is leading to something that eventually will be more interesting to others. That’s the way my art has worked out so far. It started with me wanting to take portrait photos of myself in wigs, and at first I couldn’t take full body shots at all as my cheap camera couldn’t do it. So I am going to remain true to what my heart is telling me to do even though quite honestly I’m a little embarrassed by it. I could say more about this, but I think I’ve already said it, so that’s enough of that for now. Let’s look instead at some more pics of the Space Dress:

Told ya the dress didn’t move well when jumping

This was not a crooked jump when I took it, but I did cut one of my hands out of the frame, so I decided to tilt the whole image and cut off both hands to make it look intentional.

In closing, if you have not seen the trailer for the documentary that coined the term “advanced style,” please check it out. These women are the shit, and they motivate me to stay fabulous (and perhaps get even more so) as I grow older. There is also a book with the same title (Advanced Style) by Ari Cohen, and a blog he runs as well. Ari moticates me as well as the women he photographs – he took a passion (older women with great style) and turned it into something unique and inspirational.