Since we had the day off due to the early freeze, I threw on some clothes and took photos for the afternoon. And yes, I know I said I was going to lay off taking pictures for awhile because I’m so backlogged, but I lied. Anyway, I actually have to go to work on Saturday as it’s the big placement test day, so the school will be overloaded with eighth graders and I have to be there to meet with the parents. So all in all, it was nice to have the day off today since my weekend is cut short by work responsibilities.

I thought I’d share a few new photos, even though I’ve got at least three previous sets I still haven’t processed and shared. I also tried out some new hairpieces today – what I’m wearing in these shots are two hair wraps, which are basically ponytail scrunchies made of synthetic hair. My hair is just long enough to pull into the tiniest ponytail imaginable, so on it’s own it looks rather silly, but I can wrap one of these scrunchies around my little ponytail nub and it looks rather cute. I bought this piece off Vogue Wigs; it’s called “Jolt” and only cost $7,95, but based on the recommendation of the reviewers on the site I bought two:

I am way too old for this outfit, but I had fun wearing it anyway

I wouldn’t ever wear the scrunchies that way for real, I was just playing around with how they could be used. Unfortunately they’re a little darker than my real hair, but Doug says it isn’t noticeable. The best way to wear them is one wrapped over the other, for added fullness, like this: 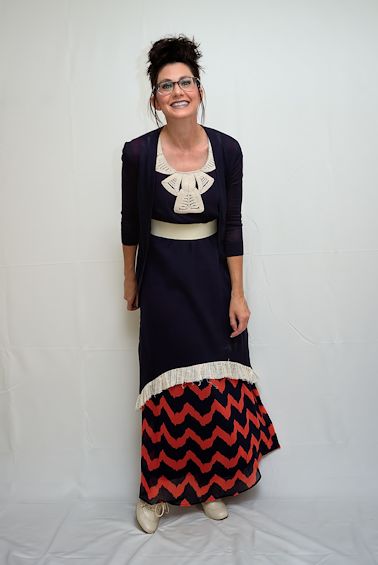 And I know that’s another really weird outfit, but as I said, I was playing around. You’ve seen that lace dress before, in a previous post; for the hell of it I decided to throw it over this great maxi dress I got from Modcloth and see how it turned out. It might have looked better over the other version of the maxi dress I bought, in black and brown:

Then again, it might just be a bad idea to put it over either one of them, I don’t know. It seemed interesting enough in pictures.

One thing these photos made me think of was how much I dislike jewelry. I noticed when wearing my hair up tucked into the two hairpieces  that I really could use some earrings, but I hate wearing them and never do. I tried to cram some into my neglected but pierced ears for the shots with my hair up, but in the end I changed my mind because they make me uncomfortable as hell. I really don’t like rings either; about three years ago I developed an allergy to the nickel in my white-gold wedding ring, and when I went to buy another one all I had to choose from was platinum or sterling silver (due to the nickel allergy). Not liking wearing rings in general, I really couldn’t bring myself to shell out thousands on a platinum one, so I ended up picking a simple sterling silver band from Tiffany’s for $150. My friends thought I was nuts not to get  a “real” ring when Doug was  telling me to buy whatever I wanted no matter the cost, but it was honestly the only thing I liked. In fact, I adore it – it has that pretty ribbon of Tiffany’s blue running through it and it is completely unobtrusive; I forget I have it on, and I doesn’t make my skin turn red and itchy like my old diamond ring did.

To sum up this weird ramble, here’s a third way you can wear these scrunchy hair headbands:

I think you can see it there; I just have both of them wrapped around a low ponytail. This is my favorite way to wear it, although when I started jumping in this outfit they both flew off (and yes, I do have a picture of one of them sailing off my head). As I said, it  helps cover up the tiny little ponytail I have going right now. Truth be told, I could have gotten away with just one, but since each one was only eight bucks I don’t mind owning two. Simon will probably end up finding and destroying one anyway; he greatly enjoys stealing things and running around the house with them in his mouth, then chewing on them until they’re destroyed. At least he doesn’t swallow anything, like Sprocket does.

Speaking of Simon, when I was first setting up for the shots I intended to hang this gossamer-thin backdrop I bought over the white dropcloth I still have hanging on my office wall. But in the end it was too hard for me to easily hang; it’s so light the pins wouldn’t hold, and I gave up pretty quickly (I’m quite tired of the white backdrop but have yet to buy the black one I keep intending to get). So I tossed the big old thing into a corner (it was huge) and started putting on my makeup, then later discovered Simon had made a nice little home for himself in it. Of course I have photographic evidence of this:

Kind of sucks that this is the cutest photo of the bunch and it isn’t of me. Oh well.

12 thoughts on “Day Off Shots”