OK, it has to be apparent by now that I’m working harder on my titles. You’re welcome.

I am going to keep this brief (yeah right), mostly because I got lazy and didn’t get my nails done last weekend, and they have now grown to a length that makes it almost impossible to type. Bring on Saturday so I can get these claws trimmed (I’ve always had really strong nails that grow quickly). But what I’d like to tap out here right now is this: I think I’ve finally hit that creative wall where my ambitions are greater than my technical skill, and the time is coming up for me to take classes and really learn how to use Photoshop. I feel I’ve mastered the photography end as far as taking pictures that capture movement and motion – to a degree where I am satisfied at least – but I can envision all I could be doing with those photos if I had the skills to edit them correctly, and I just cannot grasp how to do it on my own.

I knew this time would come, and I have mentioned it several times here too. What brought me to this realization was talking to my husband tonight about how to rig some sort of structure in my studio that would allow me to easily switch out backdrops, and the truth is for the type of photography I do it just isn’t possible. Sure, if I were hanging a fairly small backdrop for portraits or still shots I could buy a stand that will hold, say, a 5 x 9 swatch of material, but what I need is floor to ceiling cloth so when I jump and move the entirety of the wall is covered, and they don’t make structures of the height and width I would require (well, unless I bought some sort of projector screen-type attachment to hang on the wall and scroll backdrops out of it, but that is crazy expensive). Plus, the material needed to cover my wall from floor to ceiling is pretty  heavy, so there’s not a rod or pole that could hold it without requiring a beam of some sort in the middle to steady the rod so it doesn’t bend under the weight. Basically, I am either looking at some sort of custom built contraption or continuing to pin shit to the walls for how I use backdrops. Of course, if we lived in an area or a house that provided lots of lovely natural backdrops that would be cool too, but we live in a typical suburban neighborhood so not a lot of stunning locations nearby for me to utilize (besides which I feel insecure setting up my tripod and shooting myself in public, like, REALLY uncomfortable) and our house is old so all our rooms are small, not to mention that neither one of us are savvy home decorators so the environment is just rather blah. Don’t get me wrong, it’s a nice house, just not chock full of unique spaces within it to take photos (and yes, I do know people with showhome-type houses that would provide me loads of opportunities for shooting, were I to live in them. I don’t). Besides which, I prefer shooting in a studio environment anyway, especially when shooting myself. 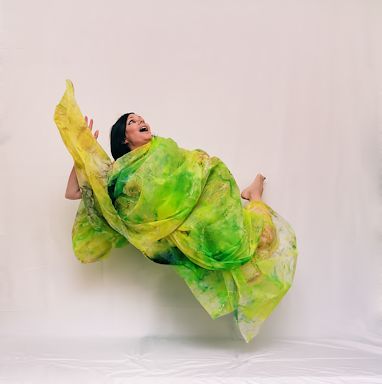 After. I almost didn’t process this one because of the goofy face I was making, but I did like that it made me look pretty high up off the floor

All this to say that if I knew how to properly use Photoshop it would open up a whole new world of opportunity to me at this point, and it’s a good move for me right now. I don’t think it would be the end of the learning process, because I definitely do want to get comfortable taking photos outdoors and in interesting locations as well, but one thing at a time after all, and right now learning how to utilize PS to its full potential feels like the best next step. I am definitely getting bored with my shots, my poses are a little stale, and my ideas just aren’t something I can manifest with my current level of skill.

There are a few studios in my general area that rent out their spaces for surprisingly decent prices, and I may try that out sometime soon also; but it isn’t a permanent solution as I prefer to work at home. I’ve seen some of the spaces online, though, and they are pretty cool –  big rooms with  a different texture on each wall where you can wander about and take all sorts of shots. I was actually envisioning with Doug my ideal house at this point – it would be on several acres of land with lots of little interesting nooks and crannies for photos (but since the land would be owned by me I wouldn’t have to worry about strangers wandering by and looking at me like I’m crazy). I love fashion shots taken out in the country; in the middle of fields or even deserted roads, but again, nowhere out here to pull that off without getting arrested or humiliated. Then, the house itself would have a lot of big-ass walls that are all a different texture – brick, wood, stucco, hell maybe even stained glass – and painted different colors. It would look crazy as hell to outsiders, but I could just pick a wall each day and get to shooting and create the appearance of being in a different location each time. Perfect photography house! Hell I guess we could rent it out to other photographers too and make a little extra scratch.

Edited – I actually messed with this one a lot more past this point, but I’ll share those pics tomorrow

But for now – no wild photographer’s dream house, no acres of land. Just a wall with a shit-ton  of pin holes in it, some decent lighting, a pretty good camera, and an expensive Photoshop program I’ve never learned how to use. And the fact remains that better backdrops wouldn’t allow me to create some of the things I’d like to anyway.Time to get to the learning, I think, although it may not be until summer that I can take a class or two.