It was an absolutely gorgeous day Saturday – 70 degrees and blue skies, such a weird contrast to the freezing gray days of one week ago. After getting my manicure and pedicure and taking myself out for creme brulee, I decided to forgo the rest of the day’s errands and come home early to try out a few levitating photos in the backyard. They didn’t turn out all that great, but I was just goofing around to see what I could pull off quickly. Tomorrow I plan to get up early, get all gussied up in stage makeup and play around with my new black backdrop Doug helped me hang tonight. I’ve also put some silver reflectors on the umbrella stands and plan to play around with light as well as jumping and showing off some cool makeup. Should be a busy day.

Anyway, back to the levitating. The light was still too bright but I wanted to get these done anyway; my first attempt was to have me floating in lotus position in front of our little patio table, but the shadows under the big umbrella were too dark so I had to shoot my flash into the shot to get some detail. As a result, I don’t think these came out so great – I doubt I’ll share these anywhere other than here, but for what it’s worth, here was the process and final shot:

Me on the chair

After that, I moved to one of my favorite little places to shoot in the backyard (which all looks pretty bad right now; remember everything was frozen just a week ago so a lot of our plants are dead at the moment) which is easy to use for remote controlled shots due to the big plant I can easily focus on before posing.

You’ve seen this plant before. Yep.

You can see off to the left the chair I used for these shots – for the first one, I posed on it, then took a third shot of me holding the chair tilted slight over to the left, then put all three shots together:

Just me holdin’ a chair, yep.

The finished product. Not great really, but it could be worse.

I didn’t do the best job with shadows there, or layering myself seamlessly into the background shot, but it isn’t bad. The last one is the best of the bunch, I think: 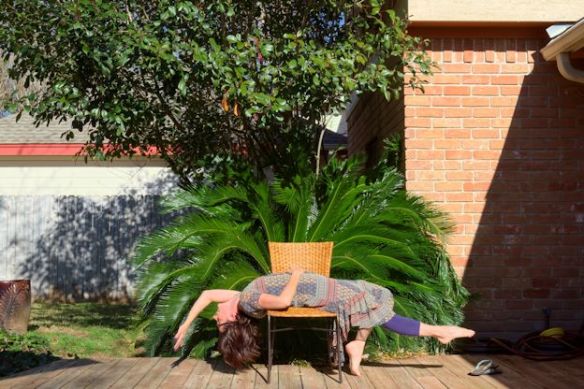 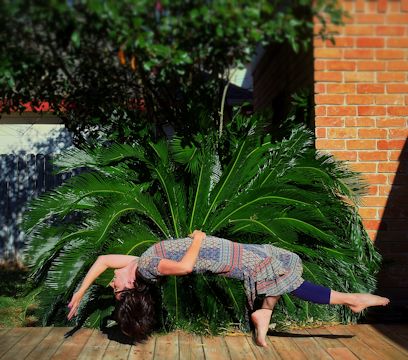 Not bad, but not great either.

That one foot touching the deck isn’t very well done, and there were a lot of things I didn’t think through properly before shooting these – such as NOT wearing a multicolored outfit that was going to blend into the rest of the photo so much that it would make selecting just my body out of the shot next to impossible, or forgetting to take my glasses off for the shots.

This levitation stuff is kind of a pain, and it’s such a more planned-out process than I usually do that I’m not sure I’m ever going to enjoy it all that much. Even the editing is laborious in a rather non-creative or un-artistic way to me; it’s more technical than inspirational and interesting. In case you can’t tell, I’m not sure how much farther I’m going to go with this stuff; I’d much rather jump around and see what comes of it than go through all of this. But I may try some more out when working with my black backdrop tomorrow. It’s certainly easier against a solid background than with all of this stuff going on (and by the way, there was no WAY I was going to use my 85mm while trying to do all this wacky posing, in spite of the fact that it takes such pretty photos outdoors. I’m nowhere near skilled enough with that lens to pull that off).