That title makes no sense, really, but I got my  new Canon EF 50mm f/1.4 yesterday and managed to test it out just a bit before bed last night, so I’ll share some of those pics real quick.

So far I’m excited about this lens – it truly is fast and focuses like lightning. For several pictures, I barely had to touch the shutter release before the thing focused and popped off a shot. Like this one – you can’t really tell, but Simon was actually trotting after me here and I was trying to move away from him to get him in the frame, and BAM, the lens just focused and fired without me hardly trying. At a maximum aperture of 1.4, this is the fastest lens I’ve ever owned (the 85mm is 1.8) and man, this thing is fast:

Yes, I know our carpet is a mess, but give me a break – we’re getting new carpet installed next month. We just never replace anything until it’s absolutely necessary.

Unlike my 85mm, I can set the camera’s focus to Zone Auto and can actually get good shots out of it that way, so it’s much easier to use on moving targets or on self-portraits than the 85 (which tends to work best with Single Point focus). As an example, I popped off a quick selfie using my remote and the Zone Auto Focus and it provided a decent shot, whereas with the 85mm it would have been very obvious if the zone found, say, my nose instead of my eyes: 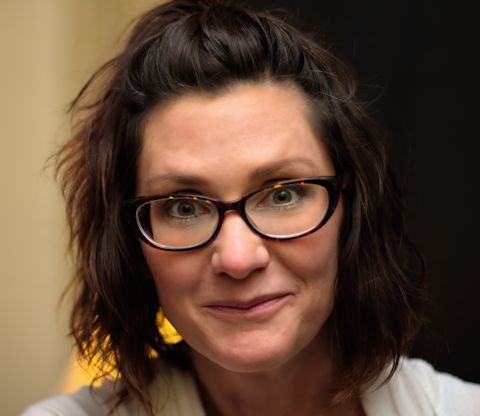 I made a goofy face on purpose, and no I don’t have makeup on. It was bedtime, so sue me.

Being able to use the zone AF also makes setting up a self-portrait shot easier, since I don’t necessarily have to find something other than my face to pinpoint my focus; I can get a general focus from the camera, and then when hitting the remote, the lens can find me, so bonus points there. And, the bokeh is still lovely, adding a full stop to the 1.8 of my 85mm lens. Take this collage, for example, where I snapped a pic of the same subject three times using different aperture settings:

In case you’re wondering what that is, it’s a plastic replica of Gypsy, one of the robots on my all-time favorite show Mystery Science Theater 3000.

With the aperture fully open at 1.4, the bokeh (or blurring of the background) is downright delicious; as a comparison I also upped it to 2.8 in the middle shot and all the way up to 4.0 in the last one – which is the maximum aperture on my trusty old 17-40mm lens. So you can see the benefit to using the 50mm over that zoom lens for portraits as I’ll get a much prettier background blur without losing a lot of clarity in the subject. This 50mm does take crisp shots as well (white balance is bad here and it’s not a great shot for some other reasons I won’t get into):

Should have turned off that lamp behind me. Oh well.

I used Zone AF again and as you can see, even though there was a lot going on here with both Sprocket and Simon in the frame, the camera found me fine, and I still got some nice blurring, especially of Simon in the foreground. And on a side note, my hair has gotten long enough for me to wear it natural and get a decent wave pattern out of it! You’re welcome.

Now if I want a real precise focus I can use the single point AF and get an effect that’s pretty close to what I’d get with the 85mm, which is what I did here to focus on Sprocket’s nose: 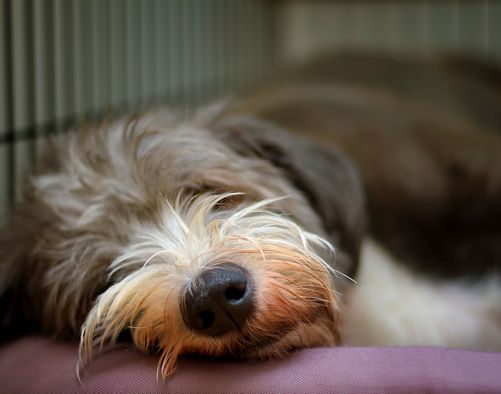 As I mentioned before, I did notice white balance is trickier here, but I was playing around with Manual mode and other things more than I usually do so that could have been part of the problem. II am still learning how to use the camera really, so there’s a lot that works together in ways I don’t fully understand. But between playing around with new (as well as old and forgotten) lenses and reading about how to shoot outdoors, I am definitely learning many new things about the technical aspects of digital photography that I used to read about and not follow at all.

Overall I’m excited about this new lens and the potential it has to help me improve my shots. Learning more about aperture settings and working in Manual mode is helpful as well, even when using my zoom lens, so I can get a final product with which I’m satisfied. Obviously the downside of using a lens like this is that zooming in and out requires me to move around rather than being able to do it through the lens, but even a good zoom lens sacrifices a bit of quality in order to have the zoom capability, so it is definitely worth it to play around with and own prime lenses with a set focal length also. The 85mm and the 50mm are two of the most-mentioned focal lengths in relation to prime portrait lenses, so that’s why I’ve started with those. Now, there is an L-series 50mm and an 85mm one that are faster even than this one – the L-series 50mm and the 85mm both have a max aperture of 1.2, which is crazy fast, but you’re going to spend about $1500 more for that extra stop (ack!). I just can’t justify that cost yet, so for now, the two lenses I have at that focal length are fine.

Oh and if you are curious about trying out a 50mm lens, Canon does make a cheaper version which I used to own and sold recently; the max aperture on that one is f/1.8, and you can get one for about $100. It is an absolute steal at that price and a really great starter lens for working with this focal length. It’s plastic and feels cheap as well as being noisy, and it’s trickier to work with, I think, than the one I now own, but if you’re curious at all about prime lenses it’s a great place to start.