You know what I’m gonna say about that title already. You’re welcome.

I got an email while at work today that my new Canon EF 70-200mm f4 telephoto zoom lens had been delivered to my mailbox, and I immediately felt like Steve Martin getting the phone book in The Jerk:

Of course I had to wait until the end of the work day to try it out, but as soon as I got home I ripped into the box to give it a go. I have to hand it to the seller I purchased this from on eBay: the lens shipped within two hours of me paying for it, arrived quickly, and was packaged conscientiously. I don’t have the box or the manual for it, but it did come with both lens caps and the carrying case – and most importantly, the lens is in great working order. A top-notch eBay experience all around, which definitely isn’t always the case. 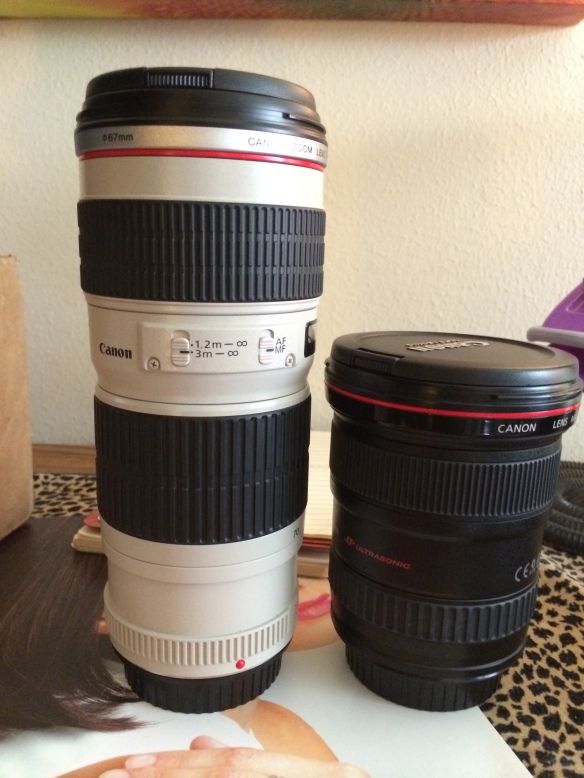 One advantage to this particular version of Canon’s 70-200mm lens is that this one is surprisingly light for its size; it wasn’t too much heavier than the 17-40mm and was not difficult to carry around at all; although once I added the Speedlite flash to my camera and tried to take photos indoors, my arm grew tired rather quickly. I don’t see this being my go-to lens in low-light situations anyway, so that probably won’t matter.

The first thing I wanted to see, since numbers mean absolutely nothing to me, was just how much zoom I could get out of this thing. I did this in my usual manner – by comparing it to shots taken with other lenses. In this case I compared the 70-200mm to my 85mm, which is the longest lens I had until buying the new one. Here’s a few collages of both lenses compared by standing in the same exact spot using each one and focusing on the same exact thing. This first collage was taken standing right outside my back door while focusing on some bottle brush blooms:

You can see I’ve got quite a nice zoom at 200mm, but I’m sure you can also see the problem here: the resulting photo was blurry. One way I saved so much money here is that I bought an older version of this lens that does not have IS (image stabilization); but I researched it pretty heavily before I bought it, and most reviews claim this lens can take tack-sharp, crystal-clear photos – when used properly, that is.

Clearly, I was not using it properly in these first collages, but a billion lens reviews can’t be wrong, so I know I just need to play around with the thing in order to improve my results. In fact, I wasn’t surprised at all by these blurry shots; I quite expected it to happen. Since I knew the first photos I took with the lens would be blurry crap, I paid little to no attention to anything beyond snapping out some comparisons.

Also taken while standing in the same exact spot – 85mm on the left, 200mm on the right

Once I got my comparisons done, I decided to try out some techniques to make the pictures more focused; I do want to get a monopod to use with this lens as I think that will be the most convenient; obviously a tripod will work as well, but I wasn’t in the mood to set it up this time. I really wanted to wander around the backyard and take shots, so I worked with upping the ISO and changing the shutter speeds to get better photos. I also switched from single shooting to low speed continuous so I could pop off a lot of shots at once, in the hopes that at least one of them would come out clear – that really helped me get some decent ones.

One of my favorites so far

As has always been the case for me with photography, once I got into working with the equipment at hand, I found so much in my own backyard that was fascinating, and begging for my attention. As I say all the time, since discovering photography I am never bored. I supposed it’s true that with digital cameras photography has become so easy everyone can do it, and therefore it’s no longer impressive; but as long as it keeps me entertained and puts a smile on my face I’m happy.

There wasn’t a whole lot of foliage in the backyard, as we haven’t yet spruced things up from the cold winter, but I made do. As always, I love shooting into the sun and catching lens flare, so for now, I’ll close out this post with this one:

Lots more to come from my first foray into the back yard with my new lens; this is all I had time to process for now!