I got up Sunday morning and decided to play around with skin smoothing some more – of course – but was once again disappointment with my first attempt.

The “after” shot there is OK, but still too mushy for my liking, with too much detail lost. And as much as I appreciate comments saying I don’t need retouching (and I really do appreciate them), it’s not something I do to improve my personal appearance; I do it to create the look I want for that particular photo – I really don’t even look at the person in the photo as me, I just happen to be the subject I’m working with.  It would probably be better to show edits on portraits that are not my own, so people wouldn’t get distracted by the fact that the person in the shot is the person who writes this blog, but I’m not sure my friends would be happy with me sharing all the steps I take to the edit their portraits here. Not to mention that most of the other people I’ve photographed up to this point are much younger than I am and as such, don’t create very dramatic “after” effects. Most tutorials on YouTube also use young models as their editing subjects, and I like being able to show how to work on a middle-aged face. But my point is, whether or not I need edits to my original photos, I definitely want them, from a purely artistic standpoint. Moving on.

After working on that first shot and feeling dissatisfied with it, i decided to go dig up more skin softening tutorials on YouTube to follow. I then spent two hours following a fairly advanced tutorial that, eventually, lost me entirely, which was really frustrating. Determined to figure something out, though, I located yet another video that focused on softening the skin without losing texture:

This is a more detailed tutorial than the one I followed the day before, but I was pleased with the results as they left a lot of texture to the skin while still smoothing out some of the wrinkles and imperfections. Here’s a bigger version of my before shot:

This actually isn’t a pure before shot, by the way, as I’d already edited out my larger undereye wrinkles and a bunch of stray wig hairs that were straggling in my face, as well as removed a blemish I had on the side of my nose. But other than those edits, it’s “before” enough. The tutorial uses several steps to eventually brush over a lot of the little lines and discolorations here, but again, it managed to retain some texture at the same time – so the end result of the process was this:

The color is smoother, for sure, and the skin is definitely softer, but notice that you can still see the skin’s texture and pores. More realistic, and definitely more blended. We’ll overlook the fact that my lipstick was terribly uneven, since this is just a sample photograph anyway, but in the future I need to be more careful when applying the longwearing stuff – I suck at lipstick application as it is, but with a semi-permanent lipstick like this I really need precise application for photos, something I didn’t bother with here as I shot the photos in a hurry. Speaking of lipstick, the one I’m wearing here is from Lime Crime – one of my favorite makeup resources for photography makeup – and it is a semi-permanent one from their Velvetines line; the color I wore here is called Salem.

I liked the first go using the new technique, but I thought perhaps I could make it a little better by applying the technique I used yesterday after going through this process, just to make it look a touch smoother. I also ran it through Snapseed to brighten and lighten the skin a bit and whiten my teeth and eyes (I also tried to even out my lipstick lines a little, but was not too successful): 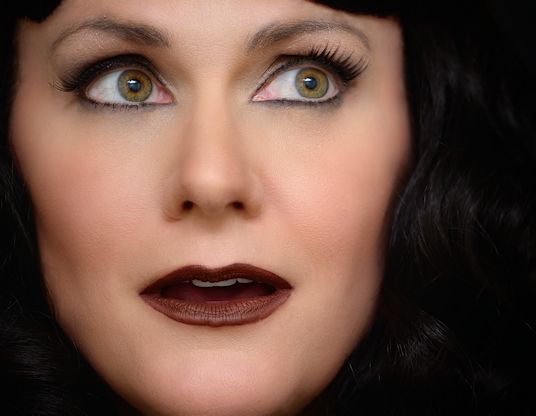 If I compare the first softened portrait to this one, I think the second one actually gives a smoother look overall by evening out the skin tones nicely, and while at first glance the level of detail appears to be about the same, there are subtle differences if you look closely. The pores in particular have not completely disappeared, just reduced and smoothed. And the color distribution is more even, while the first process came out splotchy. I think using both techniques blended details together better for a more natural appearance – but again, I get that no one else may be able to see a difference:

A few other things I considered as I spent WAY too much time working on all this today: I wasn’t using the greatest lens for portraits (my telephoto), my makeup was pretty slopped on, my lighting was thrown together quickly, and these photos are MUCH more zoomed in than most portraits I do, not to mention most portraits in general, which will usually show the head and shoulders. So, I felt those things were probably part of what led me to be less than completely thrilled with my results. Since apparently I hadn’t spent enough of my Sunday at the computer editing photos, I decided to go back into the archives a bit and find a portrait to work my new magic on where I had a good, full face of photography makeup on and decent lighting, and that was taken at a better distance with a better lens, but I think I’ll save those edits for another post. This one’s gone on long enough already!