I have actually taken lots of photos at work since being asked to step up and shoot photographs for the school (for use on social media sites as well as for promotional materials, etc.). It has been interesting trying to shoot such different types of photographs from my normal stuff (shots in poor lighting conditions, without proper equipment, and to other people’s specifications) and I’d love to share some of what I’ve done so I can talk about the hows and whys of the shots, but the photos are of students at the school and it isn’t appropriate for me to share them here. Suffice it to say that I did get the valedictorian and the salutatorian to perform a jump shot in front of some school lockers for a Facebook post.

Instead I’ll share this one, which was a test shot I took a few weeks ago – as you can tell, the test proved that my lighting was way overexposed. There was something about this shot that captured my attention even though it was a throwaway shot, so I decided to process it. Maybe it’s the harsh look of my face (I have a wig cap on, but hadn’t yet put on the wig), or the blur, or the ruffled skirt (love that skirt, BTW) or the handy ExpoDisc hanging around my neck making me look not unlike Flava Flav, or the overly yellow tones – not sure what about I liked so much, but it was begging to be messed with, so I did: 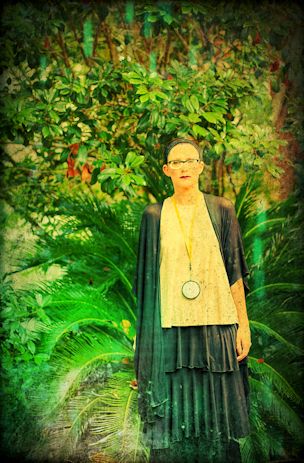 I also have another levitation/Fab Pants shot to share, but before I do that, it’s time for a SANDY BREAK! Because I’m still seeing Sandy twice a week for my arm, although I’m not sure it’s really helping when I stay on the computer for 4 hours at a stretch on a regular basis, but still. Sandy tells me stories, y’all, so I gotta share.

First of all, Sandy recently lost a long-time client when the guy got offended by her attempts to discuss what she called “women’s lubrication issues” with him. I have to call a bit of BS on this, because I find it hard to believe that someone who’s been seeing Sandy for a significant length of time would be surprised by any topic of conversation she might bring up; I’ve only written about Sandy 3 or 4 times on this blog but I bet not one of you was surprised to hear it, so clearly I’m not getting the whole story. Moving on. Sandy also had a “travel trailer” implode when she hitched it up to her truck to drive it off her property – because it was infested with scorpions. “It was just full of scorpions, and when I moved it just a little it blew up and scorpions just flew out everywhere.” I think Sandy does drugs, y’all. She also has lots of vacation properties available to rent, complete with travel trailers – just bring plenty of scorpion antidote with you.

Anyway, here’s my other levitation/Fab Pants photo. If you follow me on Flickr, you’ve seen it already. 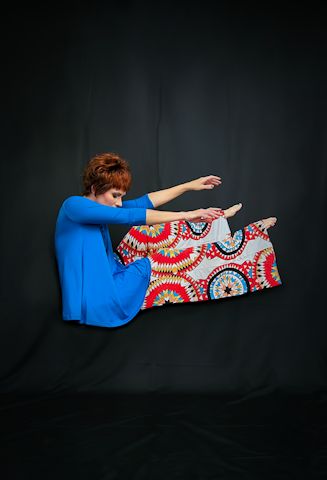 Also, I am down to about 8 days left with students at work, then another two weeks before some sort of vacation sets in. I am at that point in the school year where I wish we could cram the last few days in through Saturday and Sunday and forget weekends, to get to the finish line sooner. I find myself sitting around all weekend twiddling my thumbs, waiting to get back to Monday and GET IT OVER WITH. I am sure the students feel the same way.

Not sure if I’m going to shoot planes this weekend or not as I haven’t heard back from my father, but we’ll see. Graduation is this Saturday and there’s loads of other things going on, so if it gets put off another weekend or two I won’t be too bummed. I’ve gotten a few new wigs in that I can always photograph, as well as continue working with my macro lens to get it under control. Until next time, people!