Soooo, has anyone else noticed that a blog post I write discussing an interest in possibly, someday, at-some-point-in-the-future purchasing a new piece of camera equipment is almost immediately followed by a blog post stating that I bought it? Because I have.

That’s right, a few hours after writing the last post, which made a passing reference or two to my interest in the Canon SL1, I convinced my husband to make it an early birthday purchase and bought one off Amazon. My birthday is July 29th, but I generally consider my birthday “in the summer” so I can get my presents whenever I like during this time. It really didn’t take much convincing, since it’s reasonably priced and he’s used to me making my birthday requests early. Plus it saves him having to figure out what to get me – not that I’ve ever waited for him to figure such a thing out anyway. I know what I want, and I tell him. Works for both of us.

Before buying the camera, I’d already decided to try out two of the lenses that work well on this body because of their light weight and low price; at the time I figured I’d play around with them on the 7D in preparation for getting the camera later, but now I should get them all around the middle of this week. Doug looked the camera up and read about it a bit, and he admitted it does sound like a cool little piece of technology, so I’m wickedly excited to check the thing out. Moving on.

I thought I’d share two other collages I made of graduation photos for the school’s Facebook page. The collage I shared in yesterday’s post consisted of photos I uploaded to the page as full-size photos, because I felt they were the best ones. I only took about 65 photos at graduation, because I was also working and talking to students and dealing with co-workers and things, and it was terribly hot outside – not to mention I’d just finished sitting in a warm gym listening to speeches for two hours in full regalia. So I had about 14 I considered good enough to upload to the site as full-size photos. However, I had a lot of other shots that were rather throwaway and not that great, but still share-able due to the subject matter (I know most people don’t give two flips about whether or not a photo has good lighting or has nice bokeh; they just want to see themselves and/or their friends/relatives in a picture). However, I can’t bring myself to upload full shots to the site that I consider crappy for one reason or another (poor focus, terrible lighting/color, bad framing, kinda boring, etc.) so I compromised with myself by making little collages out of them instead. That way, the kids and parents can still see their pictures, but the school’s page isn’t cluttered up with loads of low-quality images. I hope that’s a decent compromise; we’ll see what people think. I’m sure if the school’s followers don’t like it we’ll hear about it soon enough. 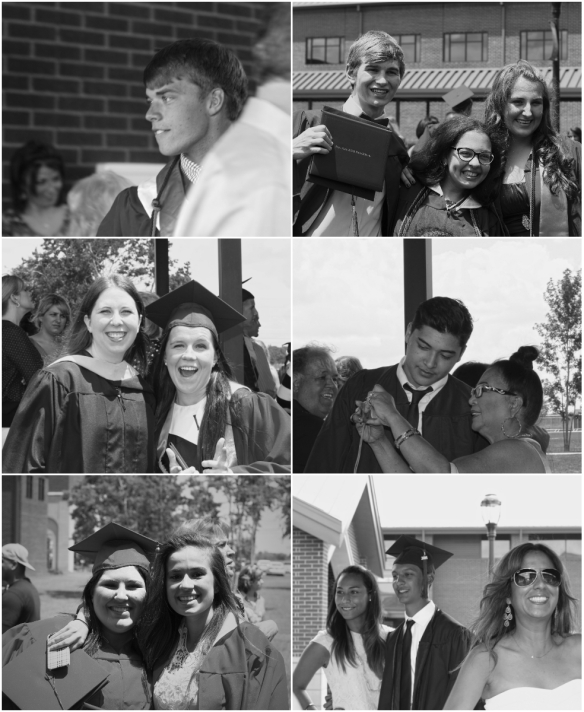 This first collage consists of shots I converted to black and white for various reasons – mostly poor color quality in the original shot, but in some cases the monochrome simply made a boring photo more interesting. In the next one, the color was usually OK, but the shots weren’t all that interesting, so I lumped them all together for more visual interest. I also didn’t bother running any of these through Snapseed or any other editing program once I was done with PhotoNinja, because I knew they’d be small pictures in a collage and I wanted to save time (and my arm).

This combined with yesterday’s post is pretty much everything I took except for some really failed shots; I did take photos at the Mass the evening before, but I uploaded those shots to the computer at school and will have to edit them later. I know these last two posts have featured photography quite different from what I usually do, so I appreciate you all playing along. Now just wait until that little SL1 comes in! I’m sure there will be more photos to follow.

Oh, and speaking of Snapseed – which is photo editing software I talk about here a lot and really wouldn’t want to live without – I know I have mentioned in the past that I downloaded a desktop version of their program a few years ago, right before the company was bought by Google and they quit providing it. Snapseed was purely a phone app for awhile after that,  but I discovered last week that there is an online version you can use if you have a Google + account. It’s not nearly as awesome as the desktop version, but the plus side is that it exists, and it has most of the same editing tools as the copy I have on my hard drive. I was happy to discover this, as I’ve always feared losing my desktop version and consequently one of the biggest tools in my editing arsenal – not to mention it means I can use it to edit photos at work. Unfortunately the internet version cannot edit TIF files like my desktop version can, which stinks a little, but at least gives me access to an editing program I love and cam use quickly. Just a tip!