I only titled this post as I did because while working with a few portraits I snapped during Saturday’s jumping shoot, I played around with light and shadows using the burn tool some more in Photoshop. I’m not really shady – except for the shadows previous sun damage is adding to my skin, but I’ll discuss that later. This post is also a random rambling of ideas that have rolled around in my head while editing these photos, so it kinda goes all over. Let’s get to it.

I didn’t actually play around with the burn tool until the last photo I’m going to share though – as I mentioned last time, it’s a new tool to me so I often forget to try it out on my photos. Part of the reason for taking these shots was initially just to test out my lighting and custom white balance, as well as doing a quick makeup check to be sure my eyebrows were dark enough (they tend to disappear) and my contouring didn’t need better blending (it didn’t). I always take test shots of these things and usually end up with at least one I want to process. This time I thought I could use the opportunity to show my hair length, since I’ve talked before on the blog about how long I’ve been growing it out.

RAMBLE #1: I don’t know if you can really tell here, but I haven’t had a hair dye touch-up in 3 months, and my roots are really starting to show in natural light. However, I’ve decided to stop coloring my hair, so there’s gonna be a bit of an awkward look to it for quite some time. I don’t think it’ll be too bad, because I’ve kept the haircolor as close to natural as possible, but my natural hair is both a bit darker than the dye job (which starts out a match but tends to lighten as the weeks go by) and a bit grayer. I have some silver in my hair but at this point cannot tell how much. We’ll see how gray I go as the months go by. I’m totally OK with this, and I do really like gray hair. Plus if I end up hating it it’s not like I can’t just dye it later. Mostly I am tired of the upkeep and just don’t want to stay on the hair-dye treadmill anymore, so I’d rather grow the gray out now when it’s sparse and isn’t such a stark contrast to the dyed hair. We’ll see how that goes, but I’m enjoying the little silvery bits I see so far.

By the way – a little side-note to these portraits is that I was actually still in my pajamas when I took them. I prepped for my shoot in the morning so I just left the jammies on until my makeup was done. If you scroll up to the first shot again, and look at the hot pink tank top under the cardigan, you can actually see a little spot of toothpaste on it. 😉 You have to look closely, but it’s there! 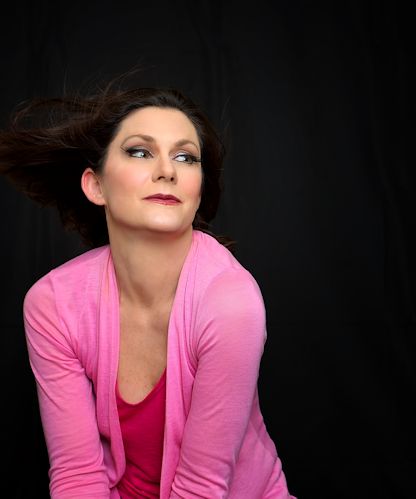 I had two umbrella stands aimed at my face here, each at a 45-degree angle, and my Speedlite in my camera’s hot shoe aimed slightly towards the back wall instead of bounced directly off the ceiling. I read somewhere that doing that would create better shadows, and I think it worked. I also think the ExpoDisc worked amazingly well here, and I loved the skin tones I got out of it.

RAMBLE #2: Another thing I’d like to mention is a little makeup tip for portrait photography: StudioFix Powder Foundation by MAC. I don’t use powder foundation on my face anymore as it’s too drying; but I’ve discovered that StudioFix in powder form is terrific at concealing the sun damage that’s begun to show on my neck and decollete (I went to the dermatologist last week for my yearly skin-check, and he confirmed that the redness and splotching I have now on both sides of my neck is sun damage, nothing else, and that there’s really no treatment for it. Oh well.) 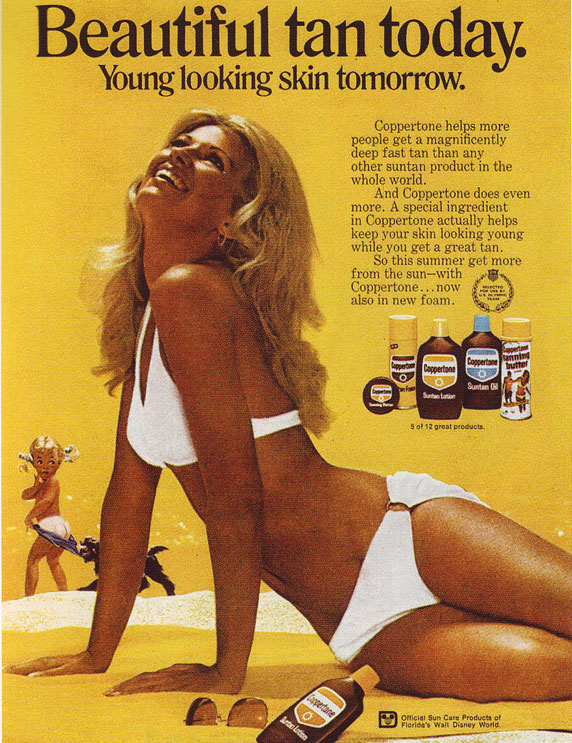 To try and show what I’m talking about, and so you can see how well the StudioFix covers it up for photos, I took a quick pic with my cell phone of my neck under normal light:

It sucks, but it’s not the worst thing in the world, and for my day to day life I don’t give it much thought. But when editing photos, MAN can it be frustrating. I don’t have any examples because I’ve been using the StudioFix for a few months now and I’m not about to dig back through thousands of files to find older shots where it caused problems, but trust me when I say that I had to do a LOT of editing to clear that up for portrait shots, and it never worked perfectly – far from it. But the thing that amazes me about using the StudioFix is that I did not have to edit out any discoloration AT ALL. It completely conceals it. Interestingly, in real life, I sometimes take the time to apply the powder foundation on my neck and chest also (it stays well and doesn’t smudge onto clothing), and under normal daylight it doesn’t completely cover it (although it helps). I suppose it’s the matte nature of the foundation that makes it such a great barrier for photos though, or perhaps it just reflects light really well? For whatever reason, this stuff works. Instead of asking you to scroll back up and look at that shot of my neck again, I’ll give a comparison collage, but in this one, I didn’t do any editing at all to the studio shot, that’s straight outta the camera. Pretty amazing…I had loads of the stuff plastered on, and big old bright lights aimed at me, but still. I should probably start using the StudioFix on my face as well during shoots, but it’s just so drying on my already dry skin that I think it might cause problems.

Anyway, enough about sun damage and gray hair. Let’s talk about the burn tool in Photoshop. I decided to edit one more portrait and do a little comparison of it without using the tool and after using it; it’s definitely a subtle difference but it is there. You can use it to darken highlights, midtones, and shadows by creating a layer, setting the desired opacity level of the tool, and using it to “paint” the effect over the chosen area with a brush. I have yet to play around with the dodge tool, which works the same way but lightens those areas instead of darkening them; because of all the light I use in my little studio I tend to need to add more shadows and depth than I do light, but I am definitely going to play around with it next and learn to combine the two. Dodging and burning are tools that need to be applied subtly unless you’re really going for a funky look, so I’m not sure how obvious the difference is going to be here, but I like what I ended up with. Collage time (before burning is on the left, after burning is on the right – click the pic if you want a bigger version): 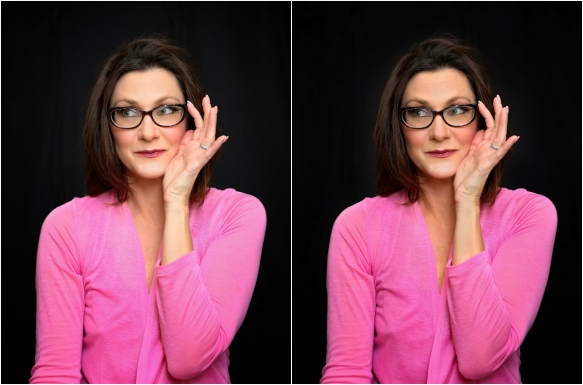 The highlights on the left were just a little bright (burning highlights is really tricky because they can easily go flat and gray, so I was only using about 3% opacity for it), and the shadows on my face in particular lacked a little depth. Without making any obvious changes, I think the shot on the right has just a bit more color in the face and a little more detail. Every little bit helps!

9 thoughts on “Portrait of a Shady Lady”