Holy hell, this whole hair-perm thing has been one serious rollercoaster the past few days. I went through an entire romance with this ‘do in the span of a few hours – from love to tearful breakup and total reconciliation in one night. And all it took to set me off was a shower. I actually wrote a whole blog post at each stage too, and am having to re-write it a third time now that the whole cycle is over. Here we go:

I got through Day 2 of the no-shampoo edict that was handed down when I got my perm on Thursday; the hair had calmed down a bit and I was thoroughly enjoying it. Then I went ahead and washed it Saturday evening since it was after the 48-hour time limit and I wanted to start playing around with it to see what it could do – major panic! The ends frizzed up and dried as soon as I got out of the shower, and it appeared to have suffered major damage from the perm. It looked really bad, and I was back in that “OMG I’ve ruined my hair” headspace I was in on Thursday.

Fortunately, I’d stopped off at Ulta Saturday afternoon and picked up a product called “Anti-Snap” by Redken that I had to use when I bleached and fried my hair two years ago; I figured I’d be needing some sort of deep conditioner to use regularly on my perm, I just didn’t know I’d be needing it this soon. In fact, the stylist specifically told me not to deep condition the hair right away, but this looked too bad to leave alone, and fortunately with a little Anti-Snap worked into the damaged ends it looked a bit better. 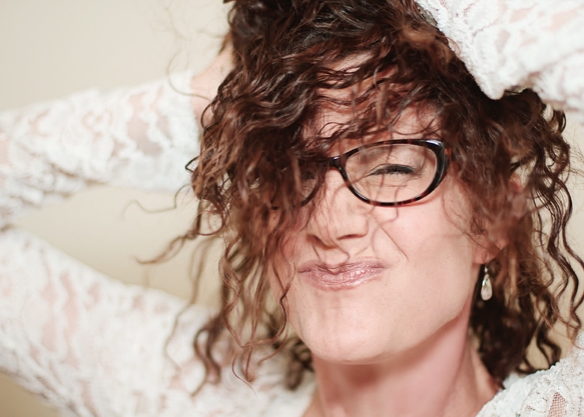 Taken before the breakup

I don’t mind telling you that the five minutes or so I was staring at all those fried frizzy ends was almost as bad as the first few minutes after I saw myself in the mirror Thursday. I went through a depressing period of considering all I was going to have to do to learn how to work with this new ‘do.  I considered the possibility that I would have to find all new products to use; the stylist put something in it that gave the curls nice definition, but the little bit of mousse and curl cream I applied Saturday night definitely did not do the trick. I began to swim through the internet sea of products available to curly hair currently on the market – the number is somewhere around eight billion I believe – and I began to worry I might spend weeks trying to concoct the proper hair cocktail to get the curls back that had apparently washed down the shower drain, while in the meantime I pulled my newly-permed hair back into a ponytail and prayed for a miracle.

Then I considered the ways I’d need to change my normal hair routine, as my usual one was working against me. I’ve always washed my hair at night and left it alone to air-dry, then styled it in the morning. Because of this, my hair generally looks terrible in the evening after I shower; I just let it go and don’t even put much product in it, so it’s a shapeless mess. I am totally used to this, but it was painful Saturday night looking in the mirror and seeing this big puffbull atop my head, waving back at me like a massive dandelion in a breeze bidding goodbye to it’s previous curl definition. I thought I would probably have to completely change my daily routine and start washing and styling my hair in the morning until my perm grew out to avoid being depressed every night.

And then I started thinking I would probably need to add some layers to my hair to balance out the triangle-shape that was going on too…and just about the time I started regretting the whole thing, I realized it would be easier, and not really all that ridiculous, to go ahead and finish the entire styling process to see what I was really dealing with, even though the the only thing I was going to do was go to bed once I was done, and I would have to do it all again in the morning. And of course, with just a little more product spritzed in it and a blow-dryer shot with a diffuser, it looked great. At least in my opinion.

I was so excited I stuck my tongue out and it looked terrible, and no way I’m sharing that, sorry.

Overall the curl hasn’t relaxed much and is still very tight, which isn’t necessarily a bad thing, but if it tones down a bit more it’ll look more on-trend. Curls in general are making a comeback – or so the magazines say – so in time I can figure out how to work with this and make it more current if I need to do so. Oh and by the way – the stylist did mention that since my hair was dyed back in March, the perm would lighten the color, and that has definitely happened. Not totally thrilled with that, but it was unavoidable. And I really do still think some layers are going to be necessary to make the shape work better with the curl, but that’s not a major deal and can be done without losing much length – I think adding some long layers around the crown area would do it, and I’m supposed to go back to the stylist in 4 to 6 weeks to get the dried ends trimmed off anyway. I’m not going to do that too soon though, so I have time to play around and be certain that it’s what I need to do.

Another one taken before the split-end meltdown – actually, I think you can already see the curls getting a little softer in the photo above

On another note, I am having thoughts about the blog and ways in which I’d like to change it. I’d like to utilize better categories than the ones I have now, since it appears the blog is never going to be solely about art and will always in part discuss things like clothes, hair perms, and other frivolous life-in-generals. I figure I might as well structure the blog that way so it makes more sense instead of labeling everything that isn’t about photography “blog” and letting it all pile up in that category. I’d like to change up the look of it too – it feels so dark to me right now. Lightening it up should be easy; the rest might take awhile, so stay tuned.

You can read another update to the perm adventure here!