Welp, today is my birthday, which means I will start telling people I’m 46 even though I’m really turning 45, because I started telling people I was 45 last July when I turned 44. I just completely confused myself by typing that sentence.

But if you thought the occurrence of something like a birthday could stop me from posting about my hair YET AGAIN, you’re wrong! Because once again I got up Monday morning and decided my hair wasn’t quite right and started snipping. The thing is, there was this same swatch of hair hanging down into my face that was annoying the hell out of me, and since stylist #2 didn’t cut as much off around my face as I’d hoped he would, it was still hanging around bugging me. Allow me to give you an example:

Not only did this bit of hair keep hanging into my face, it also wouldn’t curl; I don’t know if it didn’t get wrapped properly during the perm process or if it got fried or what, but it looked really wonky to me. So Monday morning I started snipping at it, again (this is the same bit of hair I snipped at the first time I messed it up and had to go get a trim). And it ended up really short. Of course this looked terrible since I was cutting with nail scissors, of all things (don’t ask). And since it was Monday, I was pretty limited in my choice of salons to get it fixed. I ended up hopping in my car and zooming over to the local mall, where a very nice young woman at Visible Changes evened out my latest wonky hack job, blended everything together, and did the same to the other side for balance. The funny thing is, I think this is what the haircut was lacking all along, and it only cost me 30 minutes of panic and five dollars for a bang trim. And on another positive note, the people at the salon raved about my perm and said they never would have guessed it wasn’t natural.

This is the sort of face-framing I was hoping for with my first post-perm cut and didn’t get. I think it finally took the weight off my face and got rid of the part of my hair that was refusing to curl nicely. It also makes my hair look bouncier, as I think stylist #3 blended some of stylist #2’s layers better. So yay for accidental butchery. But seriously I have to keep the scissors out of my hands now…I won’t get lucky enough to have one of my disasters easily fixed a third time.

That photo, by the way, was edited using the Nik Collection for Photoshop plugins I finally broke down and purchased last week. I had a heck of time using them, though, because they kept crashing Photoshop, and I spent about four hours figuring out how to correct the problem (ended up being an out of date driver). I spent $150 for the software, though, so I was determined to get the issue resolved. And when I finally got it fixed, I decided to use it to mess around with my new hair photo – so there you go.

Also, I finally unpacked and hung up that brick wall backdrop I ordered from China. It’s OK, but not long enough to cover the floor, and the furry floor rug I bought to cover the carpet because I thought it would look cool ended up being a disaster – it shed like crazy, and all three of my pets were immediately chewing up pieces of fake fur like cows chewing cud. I had to get rid of it before it killed one of them. So in the end, for my test pictures I had to just crop all the floor out of the shots. The backdrop itself looks OK, but I’ve got to find some other option for the floor for full-length shots (the backdrop just sort of piles onto the floor, and isn’t long enough to pull out onto it like my solid black and white ones are. So it needs some sort of transition between it and the actual floor. Hard to explain, but trust me): 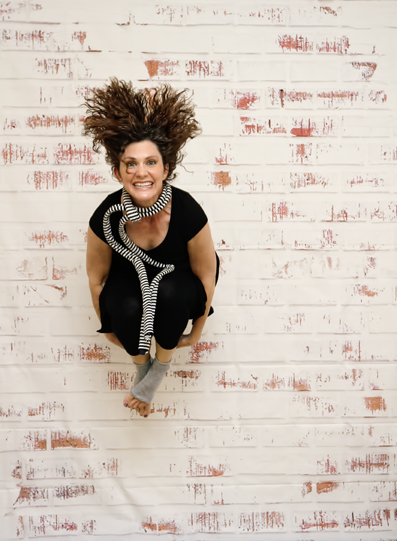 That right there is the first photo I’ve ever edited totally in Photoshop, which is a big deal to me even if no one else cares. Unfortunately although I took some more cool jumps, I don’t have more to share because I spent so much time last night trying to correct my device driver problem that I ran out of time to edit photos.

I say lucky because Penny never poses for shots, and in truth she isn’t really posing here either, but this still came out kind of sweet. And I guess it looks a little awkward having a wrinkled brick wall, but maybe no one will notice.