School starts Thursday, so of course our furniture didn’t come in until about 3:00 PM Wednesday. Then it had to be assembled and arranged, and it wasn’t until my desk was put together that a computer could be set up in my room. We still don’t have any filing cabinets, so we’re stuck as far as getting files and things together because it’s all confidential information that must be locked down. So we’re really only halfway running at this point – but the kids will show up Thursday morning regardless.

At least they will have somewhere to sit.

That is my Day 14 photo, by the way. Truth be told, I’ve considered at some point during each of the past three days just chucking the 365 project, but in the end some little picture has presented itself to me for a photo opportunity to keep me going. Some of it has been crap, or using my iPhone, but at least it’s something, as I’m sure not taking any studio photos right now. Just way, way too busy for the past week and a half getting ready for the year (even though I’m still not ready). 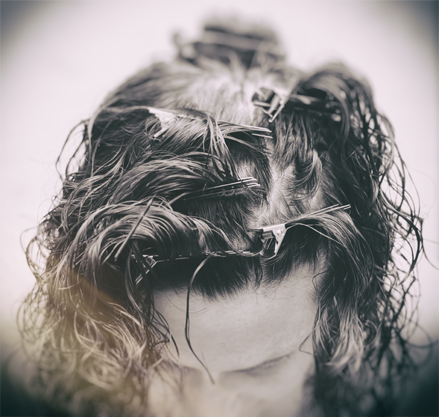 This was my Day 13 photo, and so far I like it least of anything I’ve shot. But I was seriously out of time Tuesday evening when I snapped it, and I was exhausted from getting only two hours’ sleep the night before at the godawful school lock-in I’ve still barely recovered from. I’ve starting using these DevaClips to get some lift in the crown area, and in spite of my intial doubt that these would be a useful purchase (it’s $13 for 8 clips) they actually work. They’re much bigger than normal clips, and I can pinch a pretty large section of hair together, stick the clip in perpendicular to my scalp, and it will hold the hair up nice and tight until it dries. I’ve even slept in them once or twice and they did not budge. When I take them out, there’s a big old lift and swoop to my hair that I can then tame down with the diffuser. Anyway, I put these in Tuesday night after taking a shower, stuck my head in front of my Canon SL1 and snapped this, then added a ton of quick filters to it in the hopes of making it seem interesting. All it really did was confuse people, but I was too exhausted to even explain. Moving on.

Let’s talk briefly about that lock-in though. I was pretty much dreading it, showed up around 9 PM because I was told I was only needed for the sleepover part and there’d be nothing more for me to do aside from be a spare person available in case of emergency only to find out that the coordinator of the event expected me to do a hell of a lot more than that, then got chewed out by her in front of everyone when I expressed surprise at suddenly discovering I had all these other duties I was not expecting to have. It was terribly embarrassing and upsetting, and led to me having weird panic attacks all night long, resulting in me getting a grand total of two hours’ sleep that night. I know I said it to some of you in the comments already, but to repeat: NEVER. AGAIN.

I should have known I was in for trouble when, as I arrived to the lock-in, it was raining pretty hard, and as I walked up to the gym I had to step through this grassy esplanade-like thing, and I tried to step on the little metal storm drain that was stuck in the ground because, I thought to myself, I could keep my foot dry if I stepped on it since the grass was so wet – but my damn leg went all the way through it and down the drain. Thank God someone was with me to pull me out, and that all I got was a small  bruise on my shin from the experience, as I could have easily injured the hell out of myself. 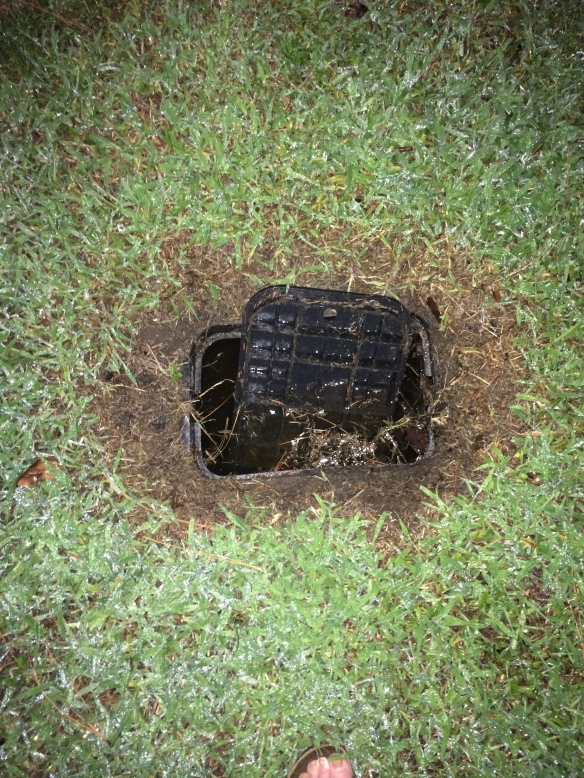 Given what came after this, I should have just stayed in there

After checking that I was not injured, my friend pulled me out and then, quite honestly, we laughed about it because it was funny at that point instead of freaking tragic (after knowing what the rest of the night turned out to be like, I actually think getting my leg ripped open and spending the night in the emergency room might have been preferable to chaperoning the sleepover). The left leg of the pants I was wearing were completely soaked, as was the brand-new shoe I had on – thank God it was a vegan Birkenstock sandal that survived no worse for the wear – so my friend and I had to drive to her house (I don’t live close to the school but she does) and get some sweatpants for me to wear, and I had to get a new pillow because I dropped mine and it was soaked too. Honestly, I should have just gotten back into my car and driven away, as clearly this was God trying to stop me from chaperoning that thing, but I failed to recognize it as the sign it was.

A bit of an odds and ends post here, I guess, and the next few days are also likely to include hastily-written  blog entries and sloppy photos, but eventually this will all settle down and I’ll get back into the groove. Wish me luck!