Because I have nothing else to talk about today, I’ll briefly discuss my latest Stitch Fix shipment. I’ve gotten one or two more since my post about them over the summer, and in general I’ve liked what I received. But this one was a total bust, and since I didn’t like anything enough to photograph myself actually wearing the items, it was easy to take quick pictures of them on the hangers before stuffing them into the mailer to ship them back. So, due to ease of photographing and discussing, Stitch Fix is the blog post topic of the day. You’re welcome. 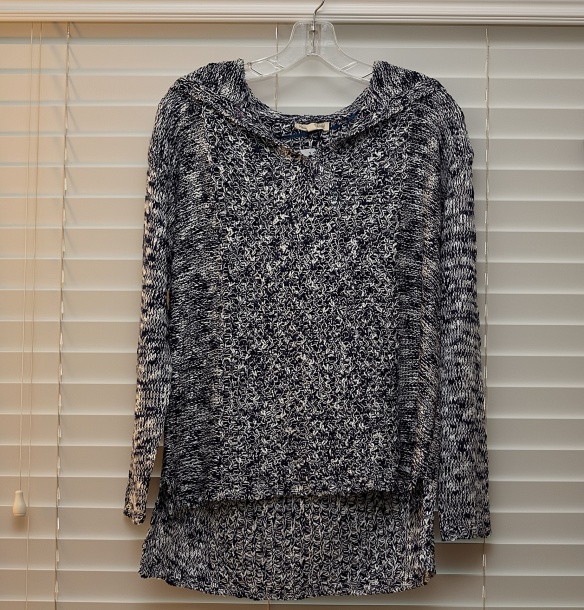 I didn’t even care enough about these pictures to reduce the photo size, so click on it if you want to see a REALLY HUGE picture of a sweater.

Sadly, that sweater was the most likable piece in my box, and it isn’t very impressive (I’m purposely not including the names of any of these items, because I don’t want anyone searching for info on these pieces coming across this post and being insulted by my negativity towards some item of clothing they like). It retails for $58, and although this is probably going to  make me sound like a terrible snob, I think everything in this Fix suffers from a low price point. I have nothing against $58 sweaters in general, but I’ve learned that with Stitch Fix unless you bump up the prices you’re willing to spend on their items, the quality just isn’t there, and when the tops run towards the lower end of the scale (the cheapest items I’ve ever seen from them are around $48) they are just NOT the business. Boring, with a poor fit. No thanks.

Oh g-d these are awful. First of all, I don’t know who my ‘stylist’ was this time out, because I never bother to read the little Style Suggestions sheet they stick in the box, but I don’t think the person read anything from my profile in the slightest. The choices here are so odd compared to the pieces I’ve received in my past few boxes, so although I know the box is packed by a different person each time it has so far seemed like by using my information and links to my Pinterest page anyone could pick out things I’d like. But I don’t see anything about these tops that matches my profile except that I did say I like my tops loose-fitting. However, these are both not only HUGE on me size-wise; but they are ugly. The white one was so sheer it might as well have been a pajama top, and I was swimming in the black one, it was so wide. Even if they had fit and the white one hadn’t been completely see-through, I never would have worn either one of these out of the house (or even in the house for that matter). Again, I hate to harp on it, but they look…cheap. Really cheap. Moving on to the worst of the bunch:

At least Simon enjoyed the box.

Yes, that Southwestern print thing on the right there is a handbag. I went to my profile after receiving this and realized that, in fact, I had not checked the box that says “handbags” under the section asking me to indicate what I DON’T want included in any of my Fixes. After receiving this bag, believe me, I went straight to my profile and checked that box. Then I unchecked it, just so I could check it again. And the jeans? They’re the “boyfriend” style of jean that I have never been able to wear – whatever makes the cut of a jean a “boyfriend” cut, it don’t work on this Girlfriend. At all. They were not bad, but the wash wasn’t anything special, and unlike the still-amazing jeans I received over the summer and wear almost every weekend, these were pretty cheap – the amazing ones were almost $130 while these are $78, reinforcing my belief that the more you are willing to spend through Stitch Fix, the better the clothes. I can get a perfectly great pair of jeans for under $78 at Ann Taylor Loft, for example, so it’s not about being a price-tag snob; it’s just that the clothes on the lower end of the cost scale at Stitch Fix are too drab and unpredictable for me to bother. The odd thing is that my profile still requests items between $100-$200, so I’m not sure why they’d send me a Fix that totals a little over $200 for all five pieces. I think someone screwed up here all around, and either sent me clothes without looking at my profile at all, or sent me someone else’s fix entirely.

Because this Fix was such a bummer, I went to the site to close out the shopping cart by clicking a big old NO on every item, because once you’ve checked out your cart you can immediately schedule your next fix, and I was hoping I could get another one within the next two weeks or so to make up for this loser. But alas, Stitch Fix is still so popular that there were no earlier shipment dates available than a month from now. I’ve gotten enough cool stuff from them that I’ll keep on receiving Fixes, and hopefully this bummer of a box was just an aberration. Even so, I’m not out anything but the $20 styling fee, so there’s no real loss. It is odd, though, to have to provide feedback to a company by saying SELL ME STUFF THAT’S MORE EXPENSIVE PLEASE. Not something I usually want to say!

EDITED TO ADD: Stitch Fix read this post (and probably read the feedback I gave them on the site too), and emailed me to apologize for missing the mark on this shipment. They also offered to roll over my stylist’s fee into the next month, which was nice, since I wasn’t asking for any sort of discount or refund for getting a lame shipment. It’s nice to know the company is paying attention to what gets said about them online and that they will respond without being asked to do so. As I said in the original post, I still enjoy the service and have gotten some great stuff from Stitch Fix, so I’ll definitely continue to use them.