Before I got called out of town Saturday, I’d made an appointment at a new salon in the city called Planet Curls. I’ve known about the salon for awhile, but never made an appointment before because it’s about 50 miles from my house, and I am much too spoiled by the suburbs to deal with traffic and bad city parking on a regular basis. But since I’m not actually getting my hair cut frequently (I get a trim every three months) and I had no other options, I figured if I was going to try out someone completely new I might as well make it someone who is good at cutting curly hair. As a bonus, Gerri, the owner of the salon who did my cut, also knows how to give perms, so I figured she’d be good to know in the future if I decide to get another one. But since it turned out I was in a hurry to get the cut done and get on the road to Hallettsville, I didn’t take such great pictures (Gerri has a little dog that follows her all over the salon, for example, and in my rush to get out of there I forgot to take a picture of it. Boo). 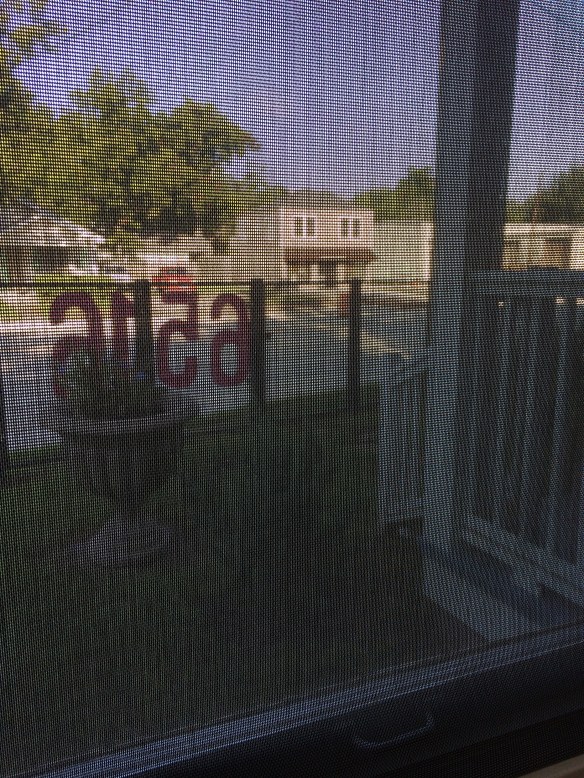 View of the street in front of the salon, and a little glimpse of the front porch – the phone camera focused more on the screen that I thought it would. Oops.

I read up on the salon before booking the appointment, so I knew I wanted an early slot as Gerri spends a lot of time with each client and by mid-day tends to be running late (this is what a lot of her reviews said), so I grabbed a 9 AM spot to get ahead of that, and then showed up about ten minutes early. As I suspected, the parking lot was small and the area is prone to traffic, so getting there early is definitely a must for me even if my stylist doesn’t tend to run late (nothing rattles my nerves more than bad city parking). The salon is an old house and is very small and quaint, which made me a little nervous – I tend to prefer big, busy salons to small quiet ones, so i can blend in and be more anonymous (in a small salon like this, everyone can hear each other’s conversations, and I get a little self-conscious about that. Weird I know). Plus, there’s usually not a decent waiting area and you end up crammed into the odd chair here and there waiting for your stylist…I am a spoiled little princess, it’s true. Anyway, getting there at 9 AM took care of that too, because there were only a few other people in the salon while I was there. 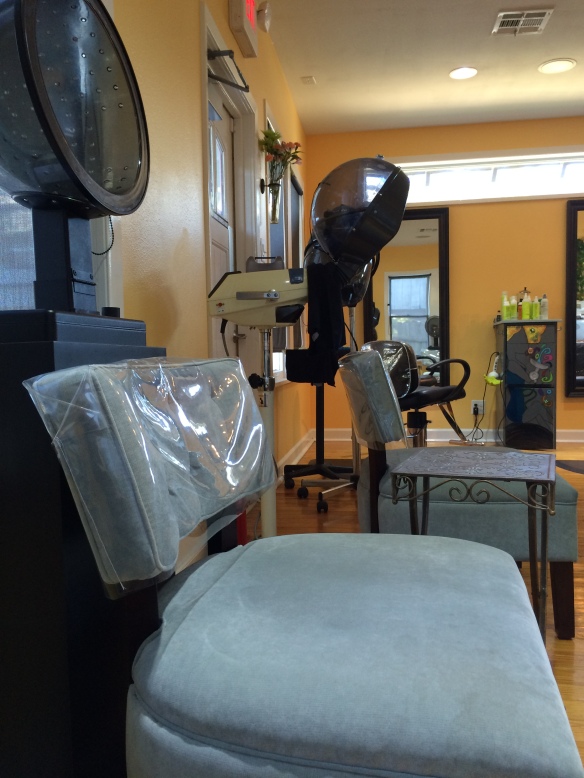 The hair-drying area doubles as the waiting area – yep, it’s a small salon!

Gerri is a devotee of Lorraine Massey, who wrote the Curly Girl book and created most of the products I use, and actually trained with her, so I was interested to see how she did with my hair. I knew that Massey always recommended cutting curly hair dry, to avoid cutting too much off when wet that would then shrink up after the hair is dried, and that is how Gerri cut mine. Massey also says you should take the cut curl by curl, being very careful at what point in the wave pattern of each curl that you snip to avoid those curls that stick out like horns. Sure enough, Gerri just sort of snipped away at individual curls while we chatted – she was friendly and just opinionated enough to earn my trust. I don’t like stylists that insist their way is the only way, but I do want one that will give their honest opinion of what I should do with my hair. Gerri had that nice balance; she agreed with me that my hair will look good a bit longer and encouraged me to keep growing it, but she disagreed with some of my styling choices and explained why she thought I should try to do some things differently. Not pushy, but confident, and accepting when I disagreed. Perfect. 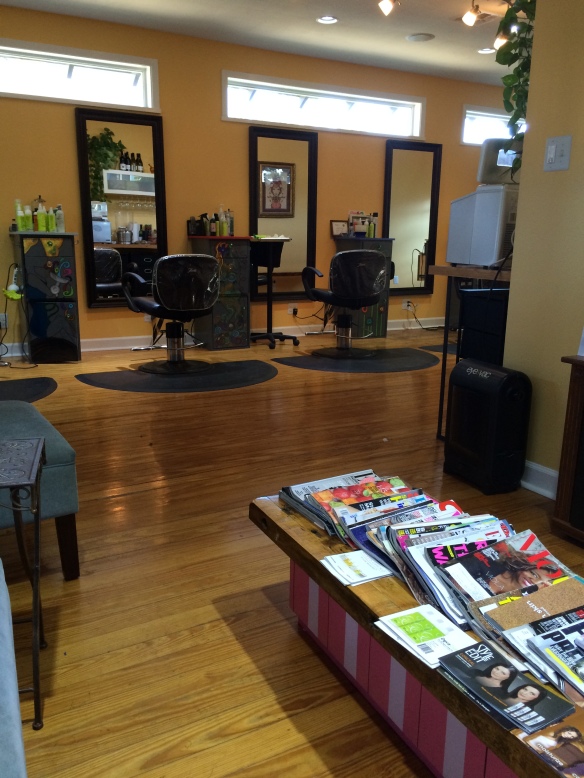 Here are some of the tips and suggestions Gerri made while she worked on my hair: 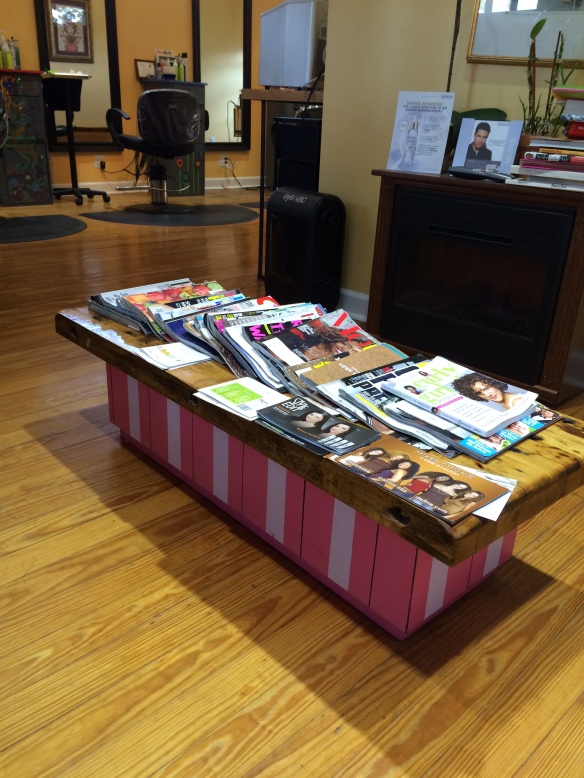 We also disagreed (in a friendly way) about some of the products I’ve tried and liked/disliked. Here’s where we differed: 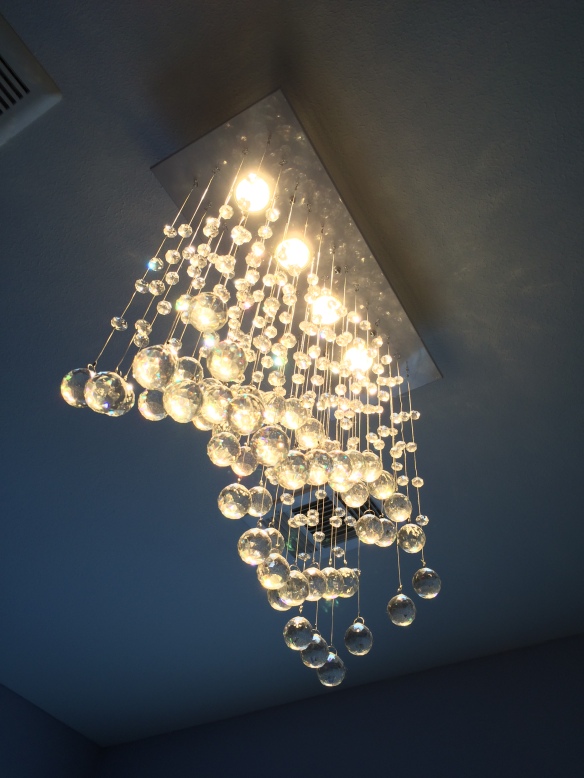 Some things happened during my Curly Girl Cut that I didn’t expect – after the dry cut, she then took me into the shampoo area and gave my hair a good wash (wish I’d known that was going to happen; thinking that I would get a dry cut and then be on my way for the day, I washed my hair the night before and styled it that morning). It was after the shampoo that she loaded up my hair with product by having me lean my head over my knees and scrunching everything in. Then she did something I really didn’t expect – she had me sit under one of these for about 20 minutes: 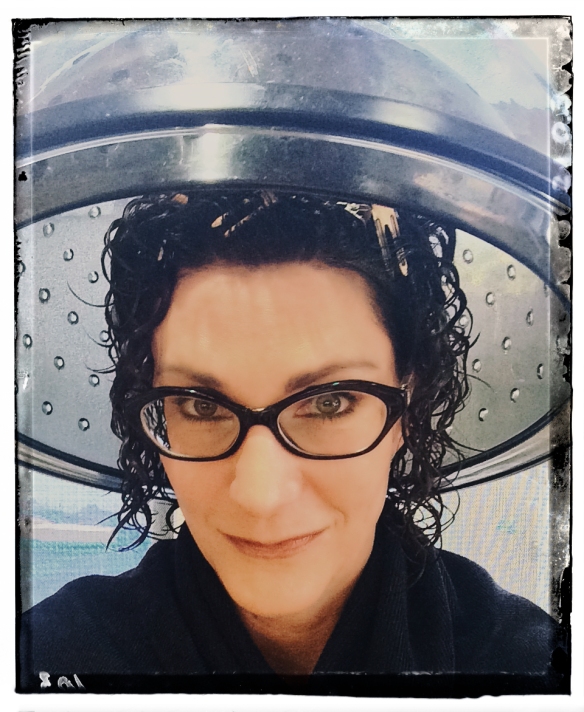 The only other time I’ve sat under one of these was, I think, when I got my perm; it was a surprise to me but it made sense, because this way I could get my hair dry without disturbing the curls at all. I liked the idea so much, while I was sitting there I got on the Amazon.com app I have on my iPhone and found a portable one I could buy for about $40. So yeah, I guess I’ll be reviewing that some time soon. She also did a much better job pinning the crown of my hair for lift than I could ever do (I still pretty much suck at doing this): 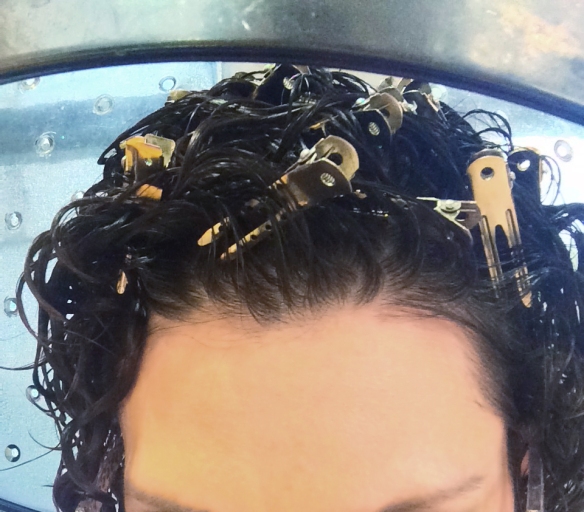 Look at all those pins! No way I could do this myself.

After I came out from under the dryer, I was ready to go. I asked her when I should come back for a trim and she said four months, to which I promptly replied I’d come back in three so I’m not sure why I bothered to ask her in the first place. Moving on. I also said at that time I’d want to discuss the possiblity of another perm, and she was game, so that’s nice. She did say, however, in response to my statement (made here many times) that I wished I’d gotten a tighter curl initially, that it probably wouldn’t have mattered if I’d tried to get tighter curls and my hair would most likely have come out looking the same way. She was surprised when I told her what a light wave I was actually going for based on how curly it turned out, and then said it was probably just that my fine hair really took to the perm and was going to look like this no matter what. She also did say it looked nice and Philippe (G-d rest his dear soul) did a good job – and she said my hair didn’t look too damaged, just had some dry ends. So yay, a nice curly haircut and possible perm-partner for later.

Here, then, was the end result: 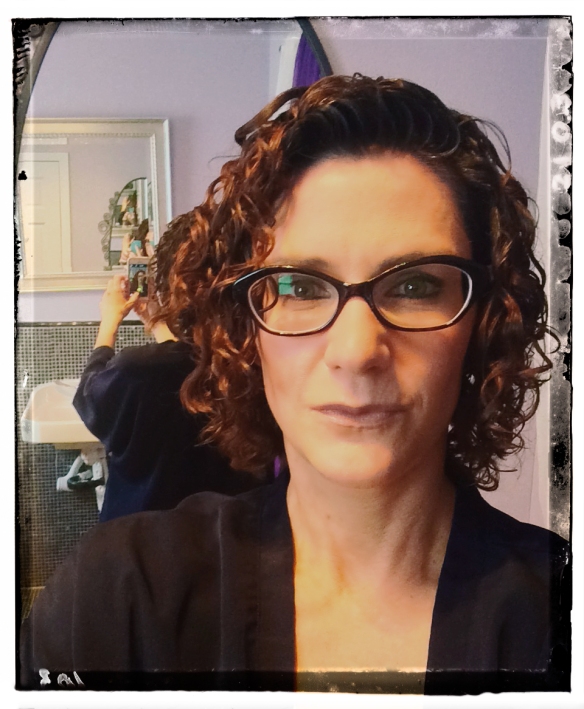 I can’t believe she got all that curl out of my hair without the help of a curling iron or even all that much styling; it was just the cut, lots of product, and the hair dryer that did it. Oh and all the pins in the top for lift. I will say as I went through the day the curls relaxed a bit and looked less “stiff,” and it also looked great the next day even after sleeping on it and putting zero product in it the next morning (because I was at my cousin’s and didn’t bring anything with me). However, I have not been able to re-create this look, and my hair looks more like it does in other recent pictures, just a touch shorter and springier. But perhaps when I get the portable hair dryer in I can pull this off. Anyway, it always takes me a few days to get used to styling my hair when it’s freshly cut, and I’ve only had one shot at it since Saturday.

In total, I was at the salon for about an hour and fifteen minutes; Gerri definitely took her time with me and did a great job. The cost wasn’t cheap – $80 before the tip – but when I’m only getting it cut once every three months that’s fine by me. I definitely plan to go back in December (already have my 9 AM appointment set up) and continue to grow this hair out a bit, as well as consider another perm in the future. Although, if I don’t perm again, Gerri can still be my stylist. Her own hair has just the slightest wave, but she still uses the  Curly Girl method on her hair, and she said a lot of her clients with curly hair actually straighten theirs too, so it’s not like I can’t keep going to her if my curls fade.