I have a few more photos from the air show to share, then some stuff I tried to pull off this weekend and failed at, for various reasons. First up, the air show:

Here’s another shot of the B-17; this is about as far away as I prefer to get when shooting planes, and I realize if I’m going to be happier with my shots next year I’ve got to get my hands on a longer zoom  lens. Since even used on eBay a longer zoom sells for a thousand bucks at the least, I may say to hell with it next year and just take all my pics of the planes when they’re on the ground. 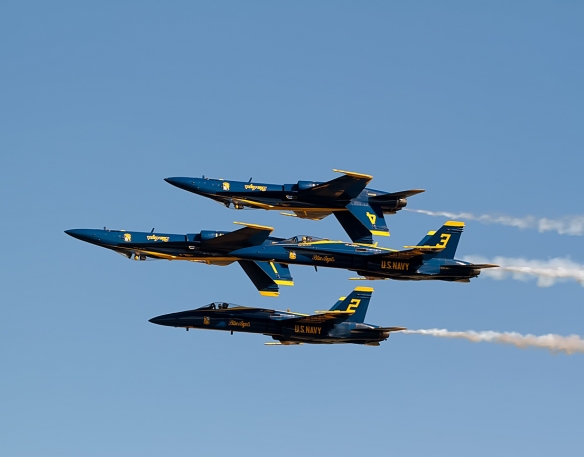 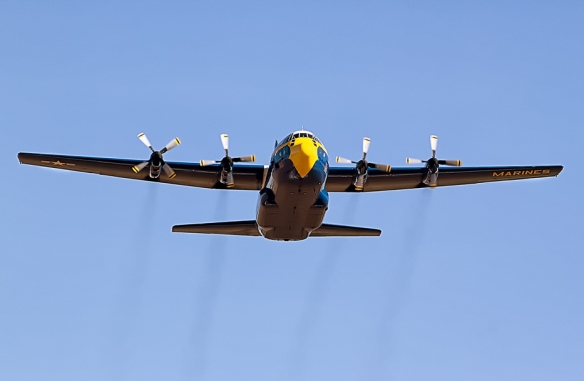 Those last two are shots of the C-130T Hercules the Angels use as a transport plane; it’s dubbed “Fat Albert.” Again, I couldn’t slow my shutter speed enough to blur the motion of the propellers here, but I tried.

And now, for my weekend fail: Saturday afternoon I decided to try some levitation, but I needed to do it quickly, so I set up, slapped on some makeup, threw on a new costume, and got to work. The results, however, were less than impressive. It took me awhile to figure out what went wrong, but in the end I realized that I need to work on my lighting for such shots. It was too bright, and it flattened me out and made me look like a cartoon. On the plus side, I’m getting better at adding shadows, and I played around with some of the new filters I now have with my Pixlr app since I signed up and became a member. But in the end, Pixlr wasn’t enough to save the shots. An example (and yes, I made it small ,because UGH): 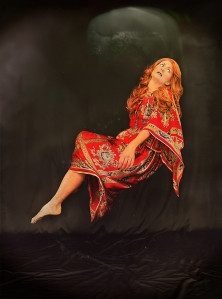 This next one was the best of the bunch, I think:

Not bad, but nothing to write home about either (although I will blog about it, apparently). My bottom foot looks huge, but I liked the movement of the hair (I also thought that having my  face covered up would help conceal the flatness my bad lighting created on my facial features). And, I used a different layering technique here than I usually do; although it took twice as long to do, I think the end results look better.

I wish these had turned out better, but not every shoot produces good results. Switching my backdrop to black probably worked against me too, since I haven’t used it in awhile and it creates harsher light than the gray one does. I probably could have just used my Speedlight and abandoned my umbrella stands entirely for this, but I couldn’t tell the light was a problem until the shoot was already over. I actually thought I’d gotten some really good stuff, too, so processing the shots was disappointing. But at least I tried.

Another busy week ahead, so not sure when I’ll have more to share. Hope you’re all wrapping up a nice weekend and getting ready for the week ahead. I know for me, Thanksgiving break can’t get here soon enough. Two weeks to go!

3 thoughts on “Odds and Dead-Ends”