Last night I spied a ladybug in our house, which my husband said was good luck. I scrambled to get my camera together before I lost her, and when I rushed back to the endtable where she’d been with what I thought was my macro lens attached to my Canon, I realized after trying without success to focus it that I’d put my telephoto on it instead. Needless to say, by the time I got the lens switched to the proper one and rushed back to the appropriate piece of furniture, the ladybug had vanished. But Simon was hanging around, so I took pictures of him instead. 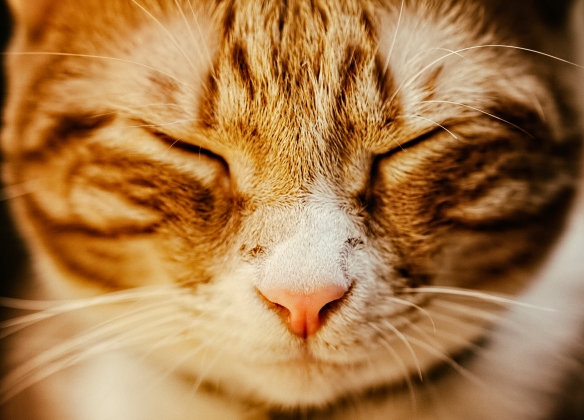 I don’t know how I feel about that ladybug, and if it was good luck or not. The next day was a weird one – we buried my 91-year-old grandfather Thursday morning, and it was an odd experience for me. I have not felt particularly close to my family in many years, and I’m not entirely sure why, but I think it has more to do with me and my emotional detachment in general than anything in particular they may or may not have done. Plus, alcoholism. It is not rampant in my family, but it is definitely present, and the ones with that particular disease have it pretty bad (my grandfather was not one of them, by the way). And lately – they are really going downhill. One was so bad at Christmas Eve it was shocking to me; makeup slid all over the face and slurring words by 8 PM, that kind of bad. There was a time when these people could at least hold it together long enough to get home from the family gatherings, but those times are in the past. Several of them were drunk upon arrival at the funeral this morning, which began at 11 AM. 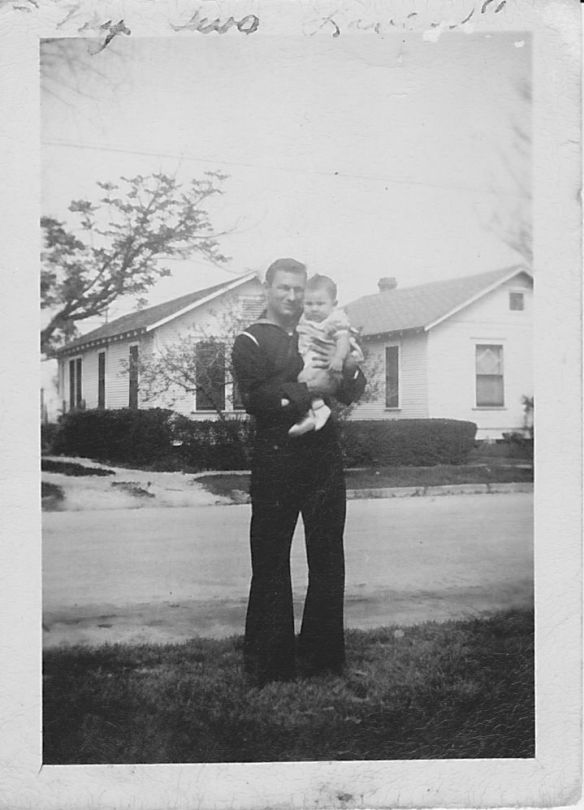 My grandfather holding my mother

Then my husband and I fought in the car on the way to the wake – he feeling cranky over the reminder, I am sure, of his father and his failing health, and me feeling out of sorts about being surrounded by so many family members from whom I feel oddly disconnected – so when we arrived there we were not speaking, which is always so easy to hide from others, isn’t it? I was already feeling strangely awkward and out of place among my own family, and then had to try and pretend (and fail) not to be pissed at my significant other, which made me all the more sullen and distant. We got tired of trying to ignore each other eventually, but it soured what little sweetness there might have otherwise been in the day (there are some family members I usually enjoy seeing and talking to, but not this time; I just couldn’t muster up a fake smile and some casual chatter until the meal was done and we both got over our anger). 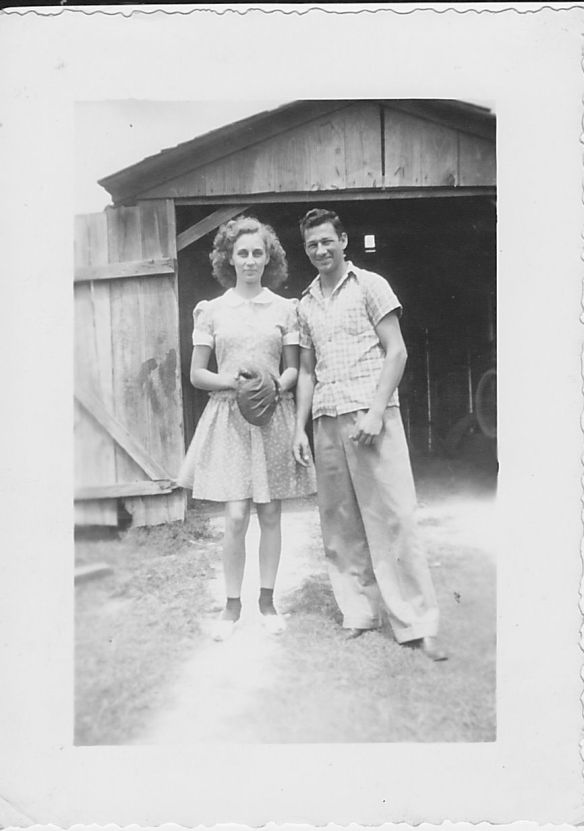 My grandfather with his sister, Betty, who died long before I was born

The truth is I am not sure how to describe my grandfather. He was, I suppose, a simple man, as most people in my family are. He fought in WWII, came home, got a job in the shipyard where he worked until retirement, married my grandmother and had two kids. After he retired, he took up residence in a brown reclining chair in a corner of his den, and that’s pretty much where he stayed until my grandmother died. He was always sitting, and watching television, and occasionally cooking chili or taking trips with Granny to visit my aunt, who lived out of town. He was surly and a little scary, especially when I was a kid, and he had a sarcastic sense of humor with more than a touch of a mean streak to it. I am sure there is more to him than this, but as I moved into young adulthood I pulled farther away from my family in general, and never really reconnected to either him or my grandmother. After my granny died two years ago, what was left of his old mind finally snapped entirely, and he spent his last remaining days in a home, confused and frustrated by his fate. 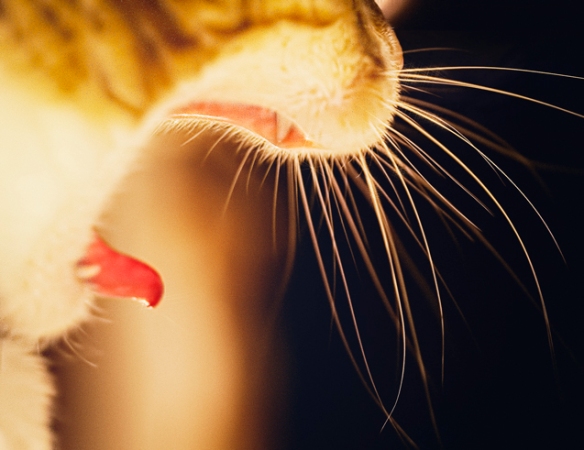 I don’t know what to say about this one. Probably an odd choice to include it here. But as a photo, it’s kind of cool.

I felt it more deeply when my grandmother died, because even though we were no longer close, she had been a major figure in my childhood. But my grandfather’s death felt more like an inevitable conclusion than the end of an era, like Granny’s did. And I feel pretty bad about that. I was always a fairly detached person, even as a kid, and I guess because he was big and occasionally mean and sometimes scary, I shut him out early on and stayed disconnected. He’s not the only person to whom I have done this. I know we can’t possibly feel close to all of our relatives, and we all have our favorites as well as the ones with whom we never really bond, but the experience of sitting in front of his coffin surrounded by family members whom I rarely speak to or see, listening to them sniffle while inside I still felt distant and removed from it to a degree, was disconcerting and disorienting, nonetheless. I’d like to believe I possess that depth of love we are always told we will automatically feel for the people to whom we are related by blood, that bond my parents and grandparents and aunts and uncles repeatedly told me exists, but the truth is I always questioned it. It seemed to me more was required to feel love for another person than just accidentally being related to them. It was as if to them love was a magical thing that just happened when you were born – sort of like how my mother described sex to me when I was a child (you meet someone and feel something special, then you get married, then SOMETHING HAPPENS and you have a baby – OK, later she did give me a book that explained it better, but still). I guess it’s thoughts like this which explain why I was such a detached child; questioning things like why I should love this or that relative is probably not the typical ten-year-old’s inner dialogue, but it sure was mine. It’s not that I didn’t love my grandfather, it’s more likely I just decided at some point that he wasn’t as lovable as Granny and we weren’t as close and never would be, and left it at that without ever trying harder, not even when I was an adult and he was dying. I’m a bit disappointed in myself, that I never reevaluated impressions I made while still in grade school about a man whose role could have been a bigger one in my life, but there it is. That’s how it was, and that’s what I did. 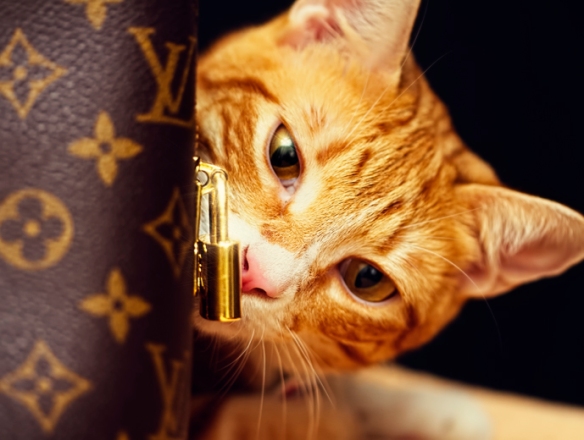 I’ll sum this ramble up by sharing that in the midst of the wake, surrounded by strangeness and still feeling very disoriented and distant, I went to the ladies’ room and locked myself in a stall, pressed my head against the cold door, and suddenly thought of Simon. I wanted nothing more than to be at home, so I could press my face into his warm fur and hear him purr and feel comfortable again. I’m not sure what this says about me, either. That I can feel more love for my pets than for my own family? Maybe that’s not so unusual after all. Simple relationships and all that. Or maybe I am just more like my grandfather than I know, and I prefer to keep things simple, to stay home and sit in a chair and savor the comfort of doing nothing. He was always the one who stayed silent at family gatherings, watching and listening rather than playing any big part, and with every passing year I do more of that myself whenever I am around them. In fact, I took on that very role today. I sat, and I watched, and I stayed silent, and I felt a little overwhelmed by it all, and I was relieved when it was time to get away. Who knows – maybe I understood my grandfather too much instead of not enough. Maybe we were too similar, rather than too different, to ever connect.

Anyway, for what it is worth, rest in peace, dear grandfather. I am glad the unpleasantness of your last few years are over. I am glad you died in your sleep, and it was peaceful. I’m glad you left your flag to my poor lost soul of a nephew, and I hope it strengthens him in a manner that helps him, at twenty-three, to finally grow up. I hope my grandmother was waiting for you, and I hope you are, and were, happy. The truth is, I could never really tell. But maybe that is just your generation, one that, as the military chaplain pointed out, is rapidly dying out. At ninety-one, I guess it was your time. I’m sorry I never got to know you better, but I hope I got to know as much about you as you wanted me to know.