So okay – maybe you just think they’re ugly, in which case fine. But I still have to ask, have you ever tried on a pair? Because I swear if you do, you’ll at least want to wear them around the house (which I do with my older ones once they’re too worn out to wear outside). And as far as the cruelty factor, which I totally understand, Ugg no longer uses the twinface sheepskin that harms the animals, so there’s not that to worry about anymore (I admit to being late to understanding about the process of getting the sheepskin, and by the time I found out Ugg was already moving away from using it). But really, the only reason I’m writing about this, aside from the weather here turning a teensy bit cooler and making me think prematurely about being able to wear them again, is because I recently stumbled across another brand that makes boots EXACTLY like the Ugg ones, and at the moment you can get them for such a steal I have to share it. 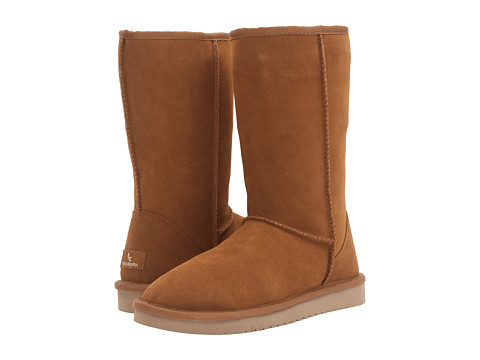 More shit I didn’t know about Ugg boots that you probably did already: “ugg” originally was just the name of a type of boot made in Australia by many different manufacturers, but the style didn’t take off internationally until the Ugg brand because popular in the States. There have been ongoing disputes over the use of the term to define a type of boot since the late 90’s, when Ugg the brand became so popular. What the end result of all that is, I have no idea, BUT what I did realize upon reading about this was that other brands of boot can be just as cozy and comfy as the name brand Ugg, and that at the moment, one brand of them in particular can be bought online for around $45! Well, sign me up for that!

Some other boots I’ve bought recently – all Ugg styles

The brand is called “Koolaburra,” and in general people who’ve tried them actually think they are a little nicer than the usual Ugg ones. In general, they’re also more expensive, but for some reason 6pm.com has them on sale right now for $40-$45. There are other styles of them at that link that are more expensive, but I’m a big fan of the traditional-style boot anyway, and those are the ones that are so cheap right now. I just got mine in, and as was recommended online I went up a size – I normally wear an 8 in the Ugg brand, so I got a 9. They fit great, and are in fact just as comfy as the Ugg ones I normally wear. The one downside here is that I ordered a ‘tall’ boot, but they are not nearly as tall in the shaft as an Ugg ‘tall’ would be. In fact, they’re just an inch or so higher in the shaft than the Ugg ‘short,’ so in essence they look like short boots instead of tall ones. That’s a bummer, but for all of $45 I am not going to complain. I have no idea WHY they are so cheap at 6pm.com right now, but they are, so if you are wanting a pair for whatever, go get you a pair while they last! They only have the boring colors, but still, GREAT DEAL.

As far as Ugg boots being slut-shoes, that’s just my segue into how over this bullying, misogynistic culture I am right now. Watching the second debate between Hillary Clinton and the Orange Anus (hat-tip Rosie O’Donnell) was just devestating. First he downplays and normalizes bragging about sexual assault in front of the whole damn world, then he slops right down into the gutter by bringing these women into the debate that have accused Hillary’s husband of sexual impropriety over the years. Then he stalks her on camera like Buffalo Bill planning his next skin suit while shouting her down, threatening her with imprisonment, and barking lie and after vacuous lie for ninety minutes without the slightest concern for anything relating to truth or reality. Sure, he would have acted that way if we had a male candidate representing the Democratic party in this election, but the gender dynamic, combined with the repugnance of the video released on Friday, made my skin crawl in a way I sincerely hope never happens again in my lifetime – probably not a realistic wish on my part, but could we at LEAST not see it again in the context of a presidential election? WTF has this country come to that a human being with zero experience, knowlege, or self-control represents one of the two only viable political parties the public has to choose from on election day? Seriously – what. the. fuck.

Simon is not impressed

The thing is, I am no huge Bill Clinton fan either. I found his behavior in relation to women to be repugnant, and completely abusive of his power, as well. But I don’t blame Hillary for it, and I do not condone using Bill’s past to intimidate her in this election, or to invalidate her very extensive, and very real, experience as a public servant. I don’t approve of  holding Melania Trump accountable for her husband’s scumbag behavior either, by the way – as a woman, I fully understand how complex a marriage to a man can be, and how easily a spouse can conceal his or her darker nature from their partner. And yes, I think it’s much easier for a man to get away with than a woman, since in most public spaces men are given so much more leeway to be as douchebaggy as they want without judgment or consequence. So if Melania says what she heard in that tape is not the Donald Trump she knows, I believe her. I believe Hillary trusted Bill when he told her those women were lying, too, and I believe she stayed with him because in spite of his massive faults, on a different level Bill has always been Hillary’s supporter in ways that I suspect meant more to her – Bill has always believed in her politically and was bragging about how she’d be president one day back in the 90’s when he was the one in charge. It’s why he trusted her so much more than anyone else in the country was willing to, and it’s why they were both shocked when the public reacted to her intelligence and power so negatively back in the day.

So when I rail against Trump’s misogyny and abusiveness  I am in no way ignoring Bill’s huge faults in relation to women by doing so. But Bill isn’t running for office, and the spectre of Donald treating Hillary like human  garbage on a world stage has turned my stomach like nothing back in the Impeach Clinton days ever did -although the way poor Monica was put through the wringer by BOTH parties back then certainly rivals the way in which Donald trotted out those other women last night for his own amusement. But holy hell – at least, in the end, Bill apologized, and admitted to his own mistakes. While it was painful to watch, you at least understood he’d earned that punishment, and could get some closure out of the fact that he was being put through a comeuppance that was deserved, and needed, if we as a nation were to ever feel clean again. But now there’s Trump, who instead of sucking it up has doubled down. And this is the way it is when a presidential candidate decides to dig down deep into the muddy gutter and slosh the shit all over America – no one comes out of it clean, or undamaged, and no one comes away from it feeling respected, or validated, or hopeful about anything, no matter who you are voting for or how you feel about either one of them. Their private shit now belongs to, and sullies, all of us. And I’m afraid there’s no escape from that now.

So I woke up this morning feeling like utter hell, depressed as all get-out, and miserable. So I did the most stereotypically female thing I could have done to feel better about it: I went shopping. And I bought more Ugg boots. I know Hillary’s going to win this election, and ultimately that will be the comeuppance that matters for Donald’s ugly behavior, and I’m pretty sure Hillary knows that, and accepts this bullshit as simply more of what she’s already had to go through to get this far. But for me, I may have to sit out the third debate, and stay away from the news until this all over. Because I don’t need any more Uggs right now, and I can’t imagine how much emotional shopping it would take for me to recover from the next one.