After finding my post about my last Stitch Fix fail, the company contacted me and apologized for sending me a shipment I didn’t like. Quite honestly, I was embarrassed – I actually didn’t tag that post or anything because I didn’t want it to be found by anyone other than my regular readers. Overall I still love the service and just wanted to bitch in my little corner of the blogosphere without getting noticed. But noticed I got, and not only did Stitch Fix apologize for the Fix, they shipped me out a new one the next week and waived the styling fee. I asked for none of this star treatment, and I must say it’s a testament to the company that they went so far beyond what I expected for simply getting some clothes in the mail I didn’t like – I wrote in my comment box on their website that I didn’t like the stuff they sent me, but I never would have dreamed of asking they accommodate me for it in anyway. It’s not like I had to keep any of it or anything. But without any prompting from me they did their best to make it right, so hats off to them for that, great customer service indeed.

I got the Fix Monday evening, but unfortunately Monday morning my father-in-law went back into the hospital so I did not have time to try the clothes on and pose for pictures. I debated waiting to write about my new Fix until I did have time, but since it looks the FIL is in for a long hospital stay I have no idea when that might be – so I took pictures of everything on the hangers like I did last time, and that’ll have to do. Sorry.

In short – I liked the items in this fix very much. Overall it was much more in line with the Fixes I usually receive, and although I was terrified that based on my complaint that the stuff they sent me in September was too cheap they’d stuff this box with super-pricey items I couldn’t afford, nothing here was out of my price range while still being better quality and a higher price point than the previous Fix. I liked everything, but didn’t keep it all for reasons I’ll explain as we go, so let’s get to the pictures. 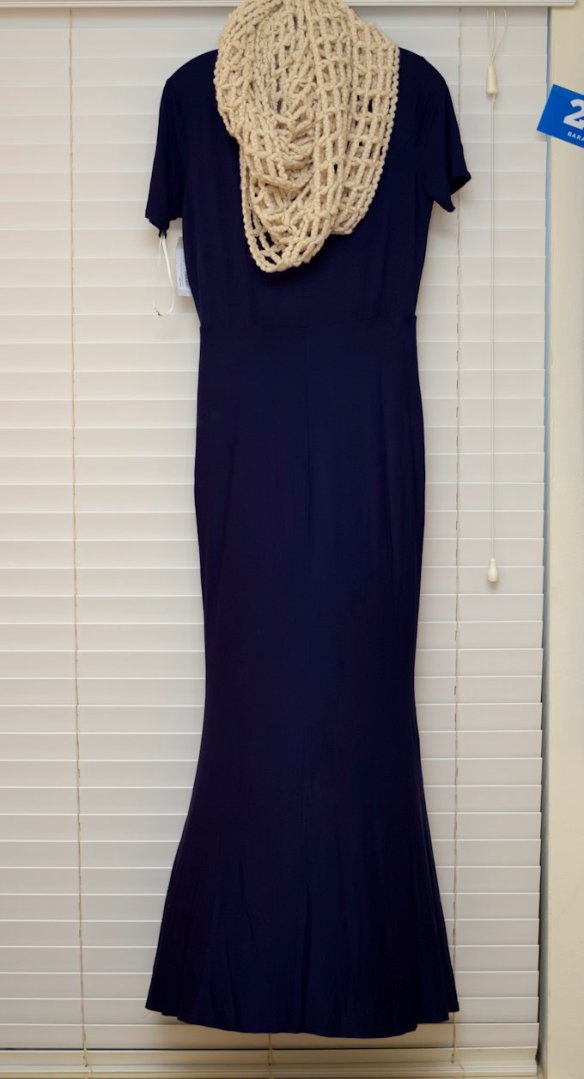 Damn it all, wouldn’t you know I threw away the statement that listed the names of these items, so I’m going to have to go on memory for the ones I didn’t keep, which is a bummer because I can’t tag things so people find them if they’re looking for photos. Oh well. This dress is from Three Dots, which is a brand I like, and it is wonderful but the fit is all wrong for my body. Really clingy through the thighs where I run large, and then the fishtail effect is awful as a result. It’s very nice and sturdy even though it’s a jersey knit, and wouldn’t need a slip or anything under it to wear. The fit was just a big old NO, so back it went. The scarf I did keep – it’s called the Sutro Chunky Knit Infinity Scarf, a fitting description. I think infinity scarves are the coolest thing ever, and that big open weave is right up my alley. It was $34 and I loved it. Moving on. 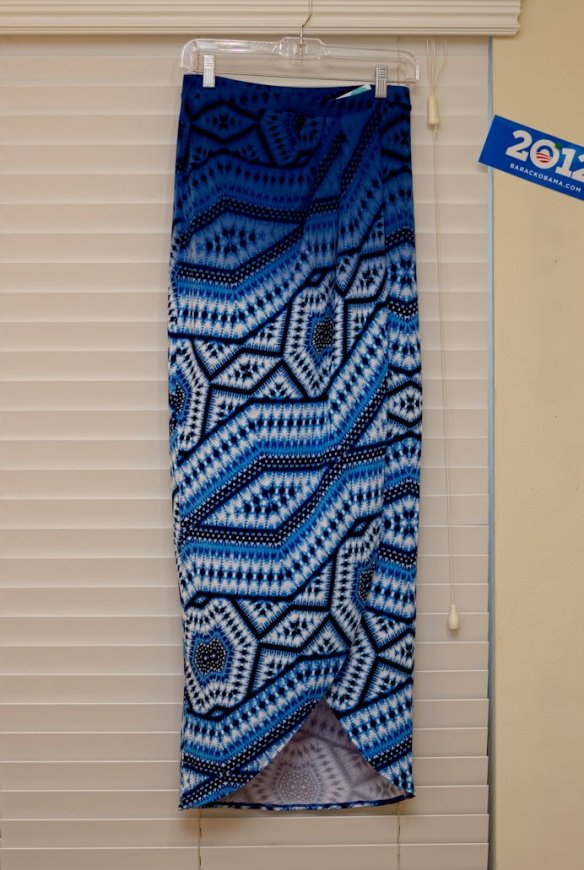 I was torn about this skirt – surprisingly, it fit me well even though nothing about it should have worked. It’s a clingy fabric in a straight skirt, and those two things generally spell disaster for me. It’s a faux wrap, though, which I think gave it a little width in the waist and a slight pleating up top that added some material and kept it from being too clingy. I don’t remember what it was called, but I do recall that it was $88, and even though it fit I decided not to keep it. The print is pretty loud and large for a small frame like mine, and in this colorway it also reads a bit “swimsuit” to me for some reason (although it does match my Obama 2012 sticker nicely). Maybe it was just too summery for me to get excited over it in October, I don’t know, I just felt like this was one of those things I tend to buy because it fits and then I end up never wearing. Back it went, but it was very cute. 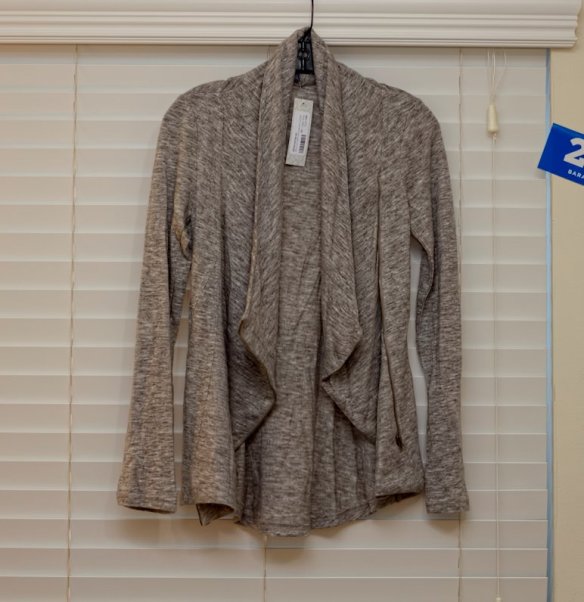 I may have prematurely bitched last time about being sent tops in a size S instead of an XS, because both of the tops I received this time were XS and felt a touch small. That said, for both of them I felt the S probably would have been too big, and I liked them both enough to keep. This is called the Alan Cowl Neck Asymmetrical Cardigan ($58), and it came all zipped up to the neck and crazily asymmetrical indeed. I did not like it that way, but when I unzipped it all was well. The fabric is a touch itchy, and as I said it felt a bit snug, so I hemmed and hawed on this one before I decided to keep it (this one and the skirt gave me the most trouble deciding). In the end, I felt this would get a lot of wear, and I actually didn’t have any cardigans in heathered gray, so it stayed. 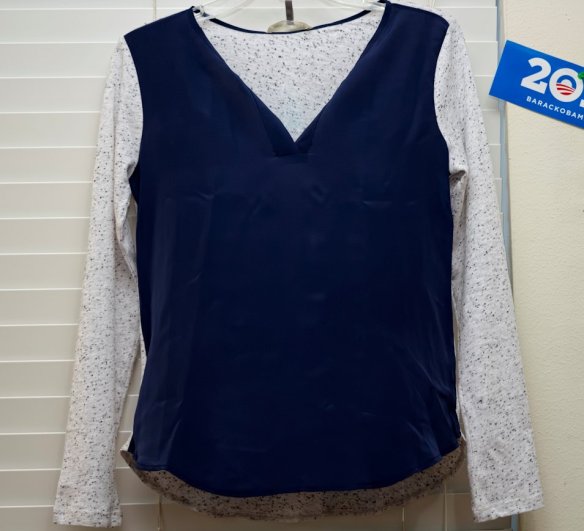 This shirt was pricey – $108 – but was so perfect for me I had to keep it. It’s called the Alec Split Neck Mixed Material Blouse, and it’s got just the right amount of casual going on with the baseball sleeves, dressed up by the front panel which is a silky rayon (even though in the photo it almost looks velvet – it’s not). Again, it was a touch snug, but one downside to Stitch Fix is you can’t exchange things for a different size (at least not that I’m aware of) and I liked it enough to keep it anyway. It’s possible the S would have been too big anyway; it was mostly the sleeves that felt a little tight on me. I think I’ll wear the hell out of this one and it goes with so many things I already own, so total score here.

I’m still a little torn about whether or not sending that skirt back was a good idea, but as I’ve purchased a few dresses already this month from Free People, I wanted to keep my final cost below $200, and the three pieces I kept rang up at $191.25, so you know, do what you’ve got to do and all that. Anyway, thanks Stitch Fix, for going above and beyond to make me happy – I don’t feel at all deserving of the extra attention, but I’ll take it. My next Fix is scheduled for October 18th, so we’ll see what the future (and my mailbox) holds!