Helloooo everyone, I know it’s been a minute, but I’m busy as usual and only have a little sliver of time in which to catch up. I’ve taken a lot more Oh My Gauze shots, both posing and leaping, and the Wings Over Houston Airshow was last weekend and I took about 2,000 shots at that. But for now, I’ll pop in here to share a few photos of the clothes from my October Stitch Fix box, then upload some of the other photos later. Let’s get to it: 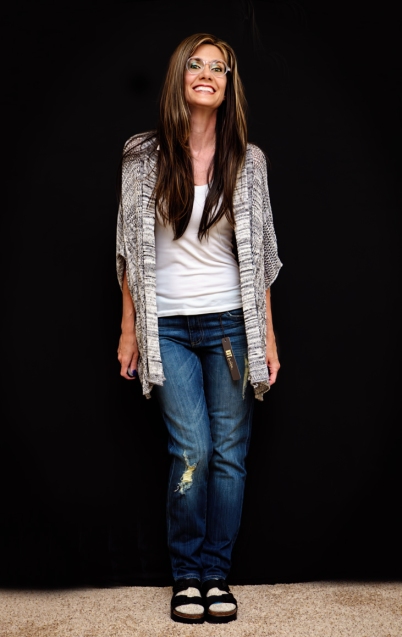 The wig here is the Robin by Noriko in Chocolate Swirl; the shoes are the “Fang” flatform sandal from TopShop (cute, but sadly, not comfortable, so I only wear them in photos for the most part)

So what we have here is the Kut From the Kloth “Kate” boyfriend jean, and the Collective Concepts “Lidy” poncho cardigan. The jeans are nice; when I took them out of the box they felt really stiff, but they are 1% spandex and do have some give, so when I got them on they were comfy, just a little heavier than my usual denim. There was nothing wrong with them, but no real reason for me to keep them, since I have all the jeans I might need at the  moment and these look exactly like a few pair of those. Plus, as you can see, they were a touch too big on me. The poncho cardigan was a keeper; it’s fairly light and will go everything. So that piece stayed.

This is the Crescent “Spooner” Cross Back Top, and I can certainly see why my stylist sent me this shirt, since it’s khaki and loose and a little hippie-ish with the fringe trim, but it just didn’t do anything for me. I think the fringe around the bottom might actually be too heavy for the fairly sheer material of the rest of the top, making it hang a bit awkwardly when it should just flow. Plus, that fringe hits me at an awkward spot and accentuates my widest area more than I’d like. Cute, but no. And yes, it’s very wrinkly, but remember it did come in a box. Moving on.

Snake-print slips-ons from Vans. And sorry about the weird face I’m making here.

Another pant by Kut From the Kloth, this one’s called the “Siena” Cropped Pant, and although they’re a little snug around the hips (making the side pockets stick out a bit), they are very light and comfortable and with the spandex in them should stretch a little with wear. I may take them to the tailor and get the pockets sewn shut, which I often have to do with chino-style pants that have them. It’s a minor detail, but it makes a big difference in how the pants fit and look once they stop poking out like that. The jacket is not from Stitch FIx, but it is another Oh My Gauze piece – it’s called the Rome jacket and it actually had two very long “tails” in the front that were just begging to be tied into a waist knot, which is something I refuse to do. So, I had my tailor chop the long bits off to create a shorter jacket all around, and I really like it now. Tailoring makes a big difference, people! #themoreyouknow

That’s actually all the shots I have from this shipment; you may have noticed I only took pictures of four items when they are always five things in each Fix, and if so, good for you for being observant! But the fifth item was a chambray, long-sleeve, button-up top, and since I’ve not once liked myself in any top like that I’ve ever tried, I didn’t even bother to put it on. Plus, it was buttoned all the way up, so I would have had to unbutton it to get it on, and it wasn’t worth the effort. Yep, I’m that lazy.

Here’s to the end of another busy week. More pics later!