How long have I been using Stitch Fix now? I think it’s been about a year. At first, I went back and forth over keeping my service or cancelling it, but they’ve really been sending me some great stuff the past few months, and it’s become my primary way of buying clothes now since I don’t shop nearly as much as I used to (in stores, that is – let’s not kid ourselves I’ve stopped shopping completely).

While my room was set up for photos the other day when I took a bunch of macro florals (I’ll show those in a separate post later) I threw on some of the stuff I’ve gotten from them recently to share here. Keep in mind I didn’t edit these shots except to process them from RAW to JPEG, so they’re not up to my usual standard, but it seems fair to do them that way since it shows the clothes themselves in the closest representation to what they look IRL, rather than adding all my usual bells and whistles. My mug is also SOOC which bugs me a little, but hey, I am willing to suffer for you, people. Oh, and while I was at it, I put on some of my new wigs to change things up in the pics. So here we go.

First up is the Minna Crew Neck Top: 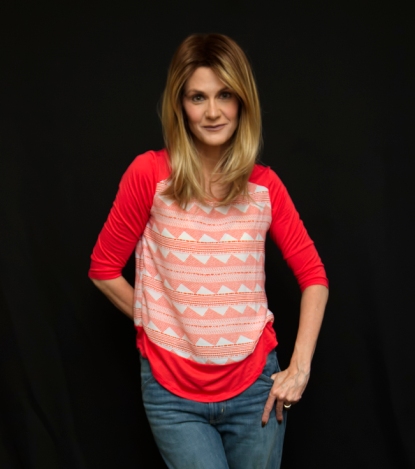 The shirt is more orange than it came out in the photo; it’s a true orange and white print, not red-orange. As with pretty much everything SF sends me, I took this out of the box and thought oh HAIL no and started to shove it back in there, but then remembered that I needed to try everything on since those nice people went to all the trouble of packing this stuff up for me and I should least put it on once before casting it off the island. Besides which, I never like anything SF sends me right out of the box, but usually find that I do once I get it on – and this top was another example of that phenomenon. The solid orange sleeves and shirttail are a stretchy jersey knit, which you know I am always a sucker for, and the printed front and back panel are some sort of silky polyester – which usually bugs me as I don’t find it comfortable, but it worked OK here since it was just the bodice and not the whole top. I got it in an extra small, so it was a touch tight in the armpit and chest areas, but not so much that it wasn’t wearable (just a little difficult to get off and on) and it looked great. Put this one down into my ever-growing pile of Stuff I Got From Stitch Fix That I Never Would Have Bought On My Own But Really Like Anyway, because I’ve already worn this top twice and I just got it five days ago. Moving on.

Next up is the Analisse Anorak Jacket: 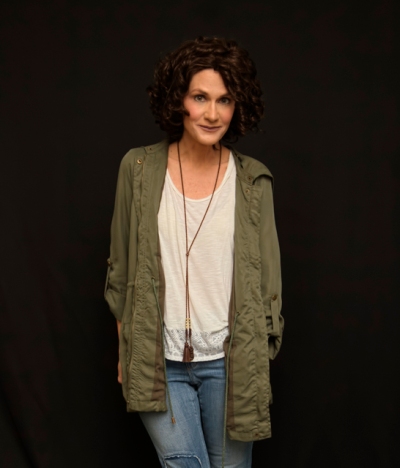 Analisse Anorak Jacket; Under Skies shell (also from a Fix I got it a long time ago); Destroyed Wash Straight Leg jeans from Ann Taylor Loft; necklace from Free People; Oprah Wig by Mica for Jessica Lin in Color 6

This jacket came from April’s shipment, but since it was clean and hanging in my closet I decided to show it anyway (I also got a really cute crochet sweater from April’s box that was in the dry clean hamper, so I didn’t show that one). This is a very light rayon jacket that is easy to carry around and throw on when needed; my only complaint is it has all these various ties and zippers and snaps that get annoying and aren’t particularly useful. I never see the point in this MacGuyver-style clothing that can be added to or taken away or converted at random. I get that camping and hiking-style wear has need for all that stuff; but when it’s a faux-outdoors jacket like this one I feel like we’d all be better off if the manufacturer didn’t play like we’re ever going to take this thing camping and leave all the shenanigans alone. I actually cut the waist tie from this one (which could  be used to cinch the waist but I would never wear a jacket that way and the ties were so long it would just come untied every five seconds anyway) and am considering cutting out the one at the bottom because it’s long also and is always banging around my knees – and again, why do I need to cinch the bottom of the jacket, exactly? Exactly. Aside from that ramble, this is nice and light and goes with everything. Love it. 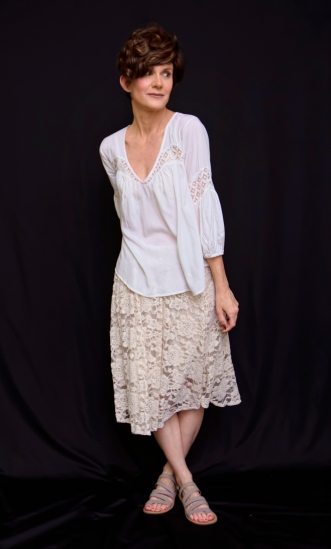 First of all, yes I am over-posing there which makes me look like I’ve twisted my body in some weird way, but whatever. The skirt may be lacy but it’s still casual in style and very comfortable, and an over-the-knee length which means I will actually wear it. I like to have at least a few items like this on-hand that can be dressed up on those very few occasions where I need to do so, but this can also be worn quite casually which is nice. The top was only kept because it goes nicely with the skirt; it’s cute enough but a bit fussy for me, and the cotton fabric isn’t soft or stretchy at all and requires (gasp) ironing, which to me is synonymous with dry-cleaning. It’s also pretty transparent, so although for the photos I didn’t require a cami underneath IRL I will – and there’s this lace panel in the back that hits right where my bra strap would show so that’s another reason a cami is needed. However, it is a cute top and it wasn’t too expensive, and I love me some white tops I can throw on with anything when in a hurry, so it stayed. The sleeves are also a nice touch with the elastic that gives a cute pouf to their 3/4 length.

Oooooh guys, I really love this next one – it’s the Char Geo Print Maxi Skirt: 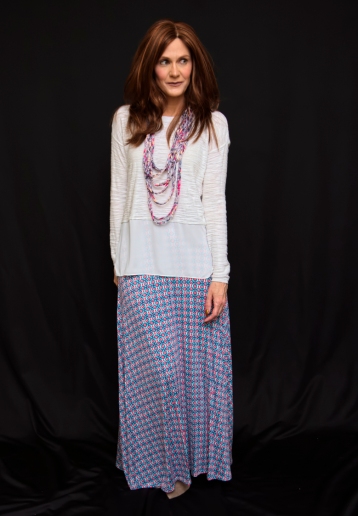 I got the skirt in my April shipment, and when I saw online that I was getting something called a “geo print” skirt I recoiled in horror. Not exactly my style. But the print is small, and the colors are lovely and spring-y (mint green, soft tangerine, navy blue and white) and it has enough of an A-line that I can actually wear this even though the material is clingy (jersey knit maxi skirts are usually a problem for me). I’ve worn the hell out of this since I got it, although when looking over my photos I realized that the point-toed flats I like to wear with it don’t look nearly as good as I thought they did, since the skirt’s so long all you see are these two little pointy witch feet poking out, and it’s odd. As Cher Horowitz says, always take a photo of your outfits, people, you’d be surprised what you find when you do.

Last but not least is a dress I almost didn’t keep, but my  husband commented that it was pretty, so I changed my mind. My face looked really goofy in this shot and I wasn’t willing to put out the effort it would have taken to photoshop a different head onto my body, so I just cut it off instead. Moving on – it’s the Briar Printed Maxi Dress:

The color is also reading green here for some reason; the bodice is a true gray and the paisley print is far more green than the light blue it appears, sorryboutit.  The cut on this one is pretty narrow, but I guess my recent weight loss has been significant enough in the hip/thighs that I can actually pull this off. It is a jersey knit (score!) and super-comfortable, and this is another one I started wearing right away.

Now – here’s my one complaint about my recent shipments that I have to mention. Guess what else came in May’s box that I didn’t take photos of or keep? Say it with me people – FREAKING SKINNY JEANS. I have received a pair of skinny jeans at least three more times since begging Stitch Fix to quit sending them to me, and every time they do I have to send them back and miss out on the 25% discount. I am starting to think they are doing it on purpose just to mess with me. Once again I left comments online when checking out, repeating my request to stop receiving them, but so far my pleas have fallen on deaf ears. The ones they sent me were a color other than black at least, I’ll give them that after they sent black ones 2 or 3 shipments in a row, but the color was hardly unique – a light faded denim. Plus, they were $160, the most expensive item in my box by far. They fit nicely and were comfortable, but of course I sent those suckers back. So, once again no 25% discount for me since I couldn’t keep the entire Fix. Sigh.

All in all, though, a successful shipment. I continue to wear most of the pieces from SF regularly (except the fabulous jeans I got a year ago that are now way too big), and they’ve certainly been sending me fun boxes of stuff. So, the subscription continues. Now if I can just get them to STOP WITH THE SKINNY JEANS I’ll be all set.

Oh, and if you liked this review and want to sign up for the service, consider using this link so i get credit for it. Until next time!