Another hair post! Just what you were waiting for, I’m sure. 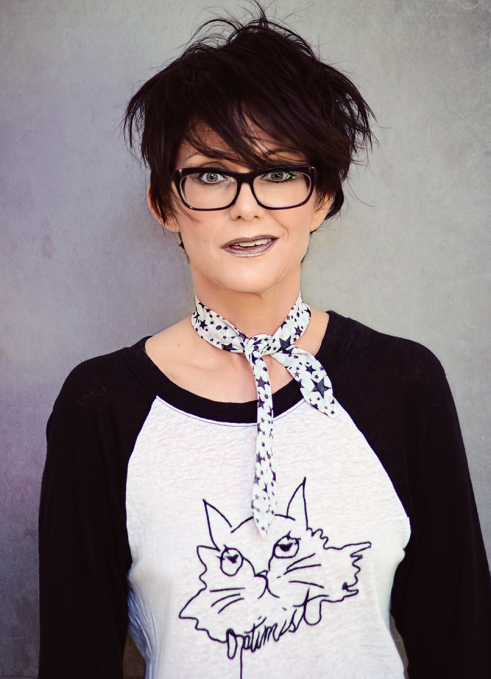 Not my real hair.

After completely abandoning my latest attempt at using the Curly Girl Method, I was a little stuck on what to do next with my ‘do. I’d been growing out my bangs for a few months, but was undecided about whether to cut them in again or keep growing them out. In looking for ideas on Pinterest, I kept finding photos of this one particular woman whose hair I loved: 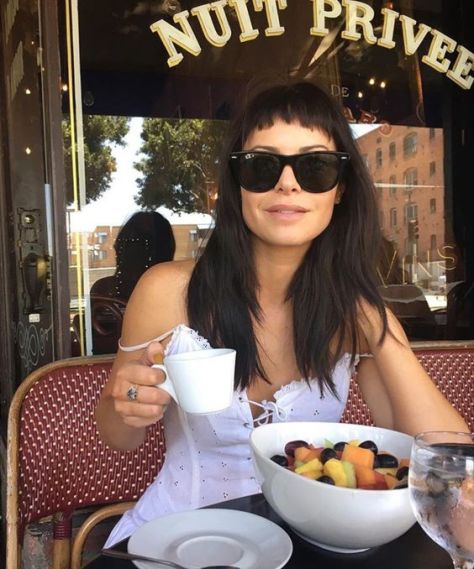 Her name is Sophia Amoruso; she was the owner of a company called Nasty Gal that I think is no longer in business. Whatever, more power to her – and to her hair!

When I showed my stylist some of the pics I’d found, just to show her the bangs, she asked me if I wanted to also color my hair as dark as the photos. In looking at all these pics of women with long hair and baby bangs, I’d gotten used to looking at the style on dark hair because for some reason there seemed to be more brunettes than blondes in this style, so on a whim I said sure, why not.

I wouldn’t mind having her lips and decidedly younger skin also, but you can’t have everything.

I’ve always found going from light hair to dark more jarring than doing the reverse; the difference always feels more drastic and takes a bit of getting used to; but this time I could tell right away that I liked it. The style really does work well with dark hair, and even though it’s been several years since I’ve worn my hair in my natural color, so far I am loving it! 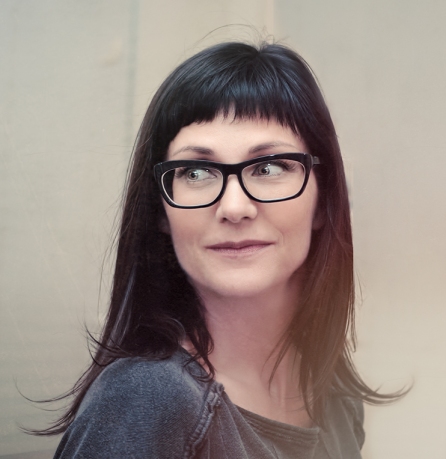 Right after I got it colored and styled

I’ve been playing around with how best to style my hair as usual – Pinterest really isn’t good for one’s hair-esteem at all. Everyone has these perfectly formed waves that I could never attain; I get that the pics on Pinterest are professionally styled and all that, but it doesn’t mean I won’t keep trying. The thing about my hair is that it has just enough wave to kind of go beachy, but not without some extra curling involved, and when I try to curl my hair I always over-do it and end up looking over-styled. If I let my hair totally air-dry it will have wave but it looks a bit unbrushed and it gets frizzy; I can blow it dry straight but then I need to take a flat iron to it to smooth it out, and since my hair is fine that makes it super straight, like nineties-style straight, and it gets kind of scraggly on the ends. In the photo above, my stylist had blown it dry, so it looked a little better than when I do it, but still pretty straight and flat as is its way.

I felt like I didn’t look like myself in this photo, which is why I liked it. It totally looks like my grandmother, in a good way.

What I really wanted was the sort of slightly mussy, I-woke-up-like this wave that Sophia’s hair had – but as I said, whenever I try to do it myself with my curling wand I end up looking TOO styled and air-drying alone doesn’t get me there either. But, trial and error led me to a process that works, and now I am going to share it. Exciting, right?

For starters, I usually do blow my hair dry because it gets it smooth and looks less frizzy after styling. As you can see in the shot below, that leaves me with hair that’s fine, but pretty flat.

Sorry I’m so yellow in this photo. Great bangs though, right?!

So, how to take this and add in just enough wave to make it look soft and natural? After plenty of experimenting, I eventually tried pulling my hair up into a ponytail on top of my head, and just curling it from there in several big sections, like so:

Pulling it up and giving it a curl with my wand

Then, when I take the ponytail out, I’m left with a perfect amount of wave. I usually have a few places I need to hit with the wand for consistency all the way around, but this whole thing takes maybe five minutes, tops, and gives me just enough wave to make me happy.

But I’m not quite finished – here comes the product placement! A friend of mine sent me a link to a styling tool called Voloom – it’s basically a fancy hair crimper that you use to add volume to your hair. It’s expensive, and I thought it was probably too good to be true, but I watched some YouTube videos where it really seemed to work and be easy to use, so I figured what the hell, and tried it out. 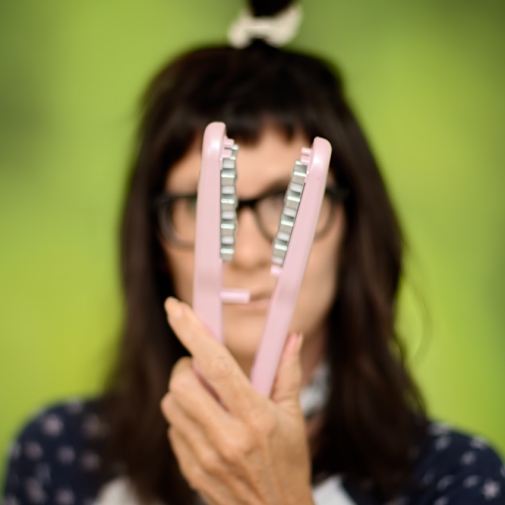 For all my wig-wearers out there, this thing basically adds perma-tease to bio hair! I think any hair crimper would work, but there are some benefits to this one: it isn’t hot against your head, the heat is adjustable, and it heats up super-fast. It comes in two sizes, and I mistakenly bought the petite size when I should have gotten the regular one. No worries, this one’s working fine, at least for now. All you do is lift up your top layer of hair, then crimp the underlayer of your hair right at the base. I just clamp down on it three times for each section of hair; starting right against my scalp and clamping down for just a few seconds and then moving it down a little and clamping again. I do this three times, and when I’m done the hair definitely has more lift. It can’t take super-flat hair like mine and turn it into Jennifer Aniston’s, but it does add some noticeable body and fullness. And it only takes maybe 2-3 minutes for me to do. 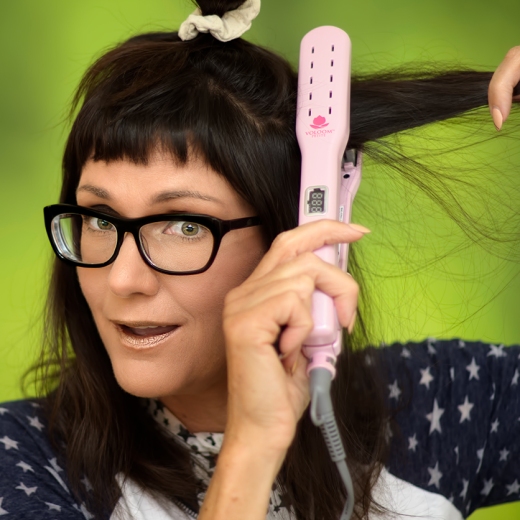 Some people have said that the crimped sections of hair show through the top layer, but maybe this is more of an issue with lighter hair or something, because it doesn’t show through at all for me. You also have to be careful not to crimp any of the hair around your face or it will look weird; this also isn’t something I’ve had issues with. It basically worked for me from the first time I used it, which is rare for me-it took me months to figure out how to use a curling wand, for example. But this thing really is a breeze to use.

The volume the Voloom adds will last until I wash it again; I can also brush it and it maintains its lift. It’s a great little product – and again, I do think if you don’t want to spend $170 on it, it would most likely work with any hair crimper as long as you use it properly. Let’s get a full before and after, just because I like them – from blown-dry straight, to curled in a ponytail, to the final result after being ponytail-curled and Voloom’ed:

Overall, I am loving the bangs, and the color, and the style. This is more length than I’ve ever had as an adult, since I’ve generally worn it pixie-short, and as I mentioned the darker color seems to make my hair look thicker. I’ve found I do need to wear more makeup, which may be the style as much as the color. Oh and one more thing – I’m thinking of actually cutting in some short bangs on one side, like this:

…But I think it might be too close to mullet territory to be a good idea. What do you think?