OK well, grr. I got my backdrop in yesterday along with the lavender sheer curtains, but I was feeling pretty lazy after getting home from work, so I didn’t tear into the boxes until about 1:30 PM on Saturday (I had to get my nails done in the morning – priorities!). On the one hand, the backdrop looks great, and I like the mottled color although it veers slightly towards tie-dye, and I think it will make a great background for jump shots. The material is very thin, which might be a problem if one is hanging it over a rod, but since I pin it to a white wall the thinness isn’t a problem. I have a few issues, though, that are slowing me down for taking photos: 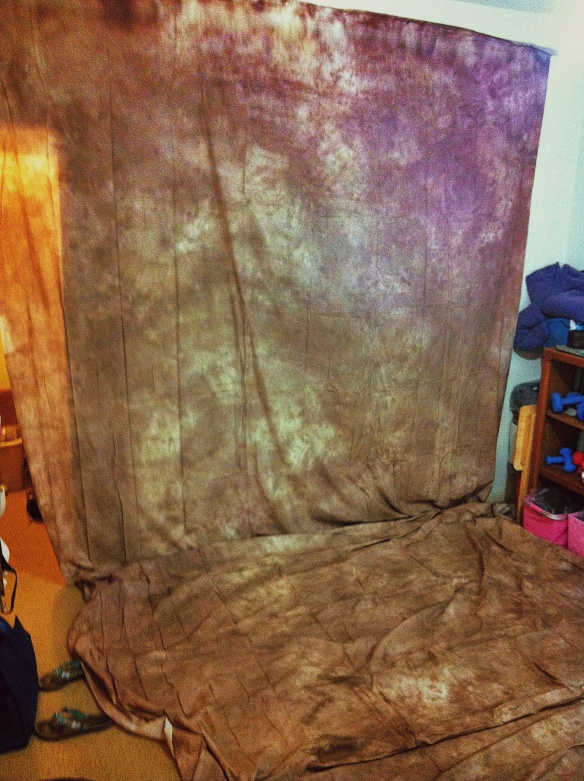 This is a terrible photo taken with my phone. The actual color is very taupe-y. And yes, my little studio is messy. That’s how studios are supposed to be.

First of all, holy shit that’s a lot of fabric. I could have easily gone down a size with no problems. Good to know moving forward that I can buy other backdrops for less money, but quite honestly this sucker is so big I’m a bit overwhelmed right now. Look at all those wrinkles that need steaming out! And I really do want to steam them – I didn’t spend $60 on this thing just to end up Photoshopping out a bunch of wrinkles, that would defeat the purpose. But it’s just SO MUCH MATERIAL.

Also, for the first time I finally have enough fabric to make the backdrop reach all the way to the ceiling, but I don’t have a stepstool high enough to reach it, which bothers me. The top of my photos always have that strip of white I either have to crop out or fill in (sometimes when I lift my hands up they reach into the white area) and again – i didn’t buy this thing in order to have to do a bunch of backdrop editing. But try as I might I cannot reach high enough and I practically killed myself to get it up this high.

And thirdly – and I think this is the real reason I’m feeling a bit defeated right now – it is hot as hell here today. My little office/studio has two walls which are completely made up of windows, and with the huge tree that used to provide shade to this room having been removed from our front yard last year because it was dead, this room is the hottest in the house when it’s hot outside. Seriously, you can walk into this room from the hallway and feel the temperature rise by ten degrees. And while for the most part I just deal with it, it is freaking October fifth, and I am sick to shit of hot weather. Not only is it hot today (near 90) it is humid as hell, because a cool front is slated to blow through some tonight and bring with it a lot of rain. This is the heat wave before the cool, so to speak, and you can feel the steamy tension in the air; it’s affecting my mood and making me impatient and cranky.

After struggling just to get this backdrop pinned to the wall and maneuvering all the fabric around (not to mention I haven’t even opened the package containing the window sheers yet) and already sweating like a dog just doing that, plus realizing I now have to STEAM all this crap, and with the room being at its hottest point right now since it’s about 2:30 in the afternoon, I am just thinking screw taking photos today. My plan was to set up and shoot this afternoon, then spend the evening editing shots and go do my weekly grocery store trip tomorrow, but I think I’m going to amend that plan and go do the grocery shopping now. Then I can come back home, get everything put away, and work on steaming all this crap out when it’s a little cooler. I can also try to find a stepstool that’s a three-step one instead of the two-stepper I’m  using currently. Tonight I can just take my time getting the wrinkles steamed out and hopefully not pass out from heat exhaustion while I do that, and then take photos tomorrow earlier in the day. I do need lots of time to process photos after a shoot, though, because I get so obsessed with doing that, which is why I prefer to shoot on Saturdays so I have more weekend time to edit. But, if I pull off this backdrop thing right, I won’t be spending as much time editing the background of my shots anyway.

So, this is my new plan for Saturday. Hopefully I’ll have some shots to share with my next post!