In uploading a few more pics from this weekend’s shoot, I wanted to comment on how much my yoga practice is helping me with my jumps and movement. It’s not that I am necessarily getting shots I couldn’t have gotten before, but that in doing the amount of leaping and moving I must do to get them I am feeling more free and loose. Usually after a shoot of any length I’m sore for a day or two, and on occasion my back (where I have a tendency to get really tight) will be extremely tender. But lately that hasn’t been an issue. And as I am moving and leaping it requires less effort, I’m less tired, and my joints and muscles feel more flexible. The entire experience has a more effortless quality to it than it had previously.

I think this shot best sums it up – again, it’s not that I couldn’t have pulled this off without yoga practice, but I actually got a lot more of these shots this time, as well as having an easier time pulling this stuff off. It’s as if my body is one long spring that used to be tightly coiled, and now it’s loosened so there’s more space between the coils with which to move. 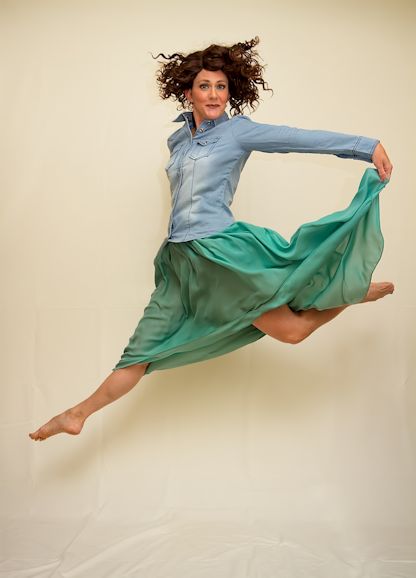 I’ve found that the important little details like keeping the feet pointed and the hands looking graceful are getting easier too (one of my yoga DVDs actually has exercises for fingers and toes). 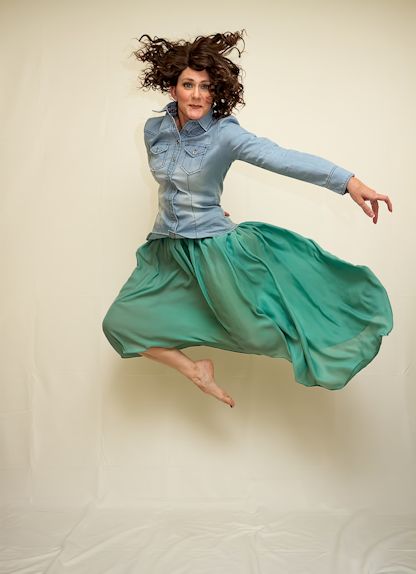 And most of all there’s improvement in my back. As someone who spends a ridiculous amount of time sitting at a computer typing blog posts and processing photos, my sciatic nerve can get really tight, especially in my lower back. My neck and shoulders feel it, too, to the point that I always now have to wear an arm brace when I’m on the computer; it’s more like tennis elbow than carpal tunnel, but it’s pretty much a bitch. Not that it’s going to stop me from my online endeavors though, so I just learn to deal with it. But, my lower back is definitely the biggest issue; many yoga moves I’ve been doing deal with slight backbends and spine twists that help to loosen those muscles up. This next photo isn’t anything close to backbend, of course, but I guarantee you I could not have pulled even this off a month ago (I’ve been doing some sort of yoga, even if it’s as little as 20 minutes, at least 5 nights a week since I started). 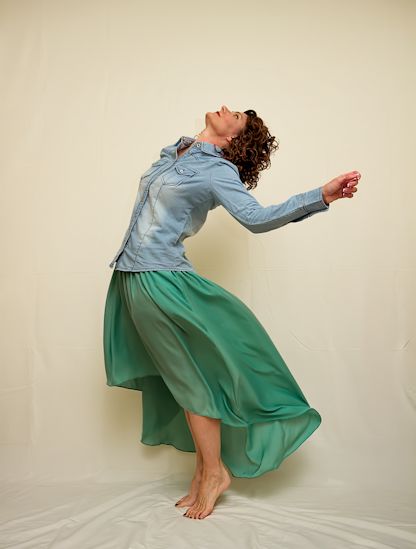 Sure, I possibly could have gotten that much arch in my back,  but not while keeping myself on my toes and the rest of my body in alignment so the move looked graceful. And I probably would have been grimacing. Even as I was taking this shot, I was noticing the difference in how it felt to move this way. And, I not only pulled this off once, I did it about five times – again, without strain or struggle. This one just looked best.

So far, I’ve been cautious with the yoga and am just now starting to push myself with difficult moves. But I’m enjoying it immensely. It’s a very peaceful way to work out. I can’t say I’m seeing any improvement in muscle tone or definition at this point – something that after a month of regular weight workouts I would be seeing – but whatever. I’m enjoying this too much right now to care about that. Maybe later I’ll need to incorporate some of the free weight work I’ve done in the past and had gotten so bored with, but perhaps as the workouts get more challenging I’ll start to see some of my old body come back without that stuff, as I just burned out on it entirely. Or maybe I won’t care about that and can just enjoy being fit even if it doesn’t result in cut abs like I used to have. I haven’t had those in a few years now anyway, so I’ve started to get used to being a little softer. My husband certainly doesn’t care, and I still look good in my clothes and am wearing the same sizes, so it’s not like I need to go around built like Madonna. Overall I just need to get healthy again, and this is a good start to that.