I’m not really suffering from it, but you may be by now. Anyway, here’s the last of the “antique alley” set I started sharing last week. I’m going to keep commentary short, because although I went to the doctor Monday about my continuing arm troubles and he put me on a round of steroids, as the dosage tapers off I find my arm already starting to hurt again. It looks like there are some steroid shots for me in the near future. There has to be some way to remedy this, because not blogging or editing photos is simply not an option. Moving on. 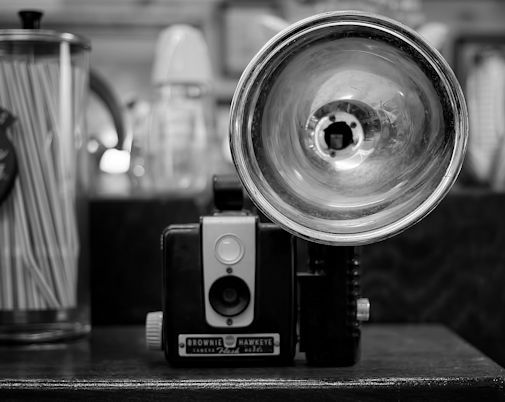 I didn’t know much about Brownie cameras before snapping this in one of the antique stores, but I found a decent webpage dedicated to them – this “Hawkeye Flash” model came out in 1950; you can read more about it, and other Brownies, here.

I apologize for this picture, but it was too good to pass up. I’m not going to provide any links to what Ken might be getting up to here; I think you can figure it out. And no, I did not set this shot up this way. 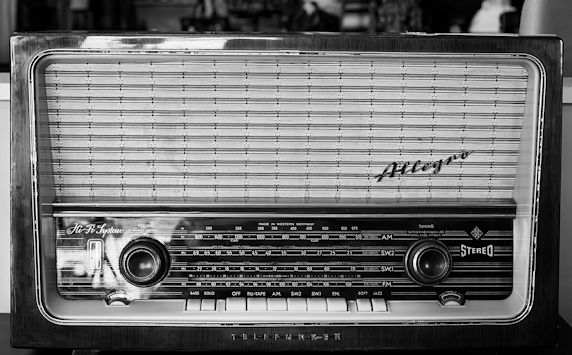 I couldn’t find too much information about this particular old radio (Allegro Telefunken Hi Fi) but the company, Telefunken, still exists and has a website. There are a few of these for sale on eBay though, anywhere from $200 up to $800. I think this one was on sale for $99 at the shop. I probably should go back and get it, but I can’t remember what store had it for sale. And now for some color:

By the way, with all of these shots I used with the burn and dodge tools in Photoshop to enhance shadows and highlights. I liked the end results, but as Beth pointed out in my last post, the changes really aren’t noticeable enough to bother making comparisons. Plus, making comparison shots takes more time, and my arm was hurting so I decided to go as easy on the clickwork as possible. I will say that in these shots though, the tools really helped bring some dimension to these metal signs, which were very dark and flat in the original shot. Especially the hot dog, which may or may not be obscene and/or racist…?

This one is clearly not an antique of any kind, but I liked the bright colors and how I captured the spinning wheels. These were all taken, of course, using my new Canon SL1 with my 40mm pancake lens, as were all the previous antique store shots. I also used that camera and lens to snap some quick pics of a few wigs I wanted to sell on eBay this week; it was great for that purpose also, and so much easier to use than the 7D. Still completely pleased with that purchase.

A few rambles: Some time soon I want to take shots in the little “antique room” we have in our house – our home is older, and has a formal dining area that for some reason I loaded up with antiques and covered in dark red wallpaper. It’s very pretty, but not really suited to the rest of the house (which at the moment isn’t suited to much of anything, but we’re working on that). For the past several years it has been used as storage for a Christmas tree and a huge tube television as well as other assorted items; but we paid a junk removal and recycling service to clear everything out of there and it is a living room once again. As little as it matches the rest of the house, I think it is a lovely setting for photos; it has a dark, Victorian vibe. So even though we are doing home overhauls this summer, including painting and taking some wallpaper down, I’ve decided to keep it. Who says a house has to make sense from room to room anyway, and a few interesting spots for photo ops in a photographer’s house isn’t a bad thing at all. I’d like to do a little shooting in there this weekend, but I’ve got to go order new carpet for the house tomorrow and a few other random things, so I might not get around to it that soon. We’ll see. I do plan to take before and after pictures of the house too though, for good measure. Happy weekend everyone!