Would you believe that a day after getting out my trusty new super-tall step ladder to hang my old white backdrop on the wall the cool brick one from China came in? Figures. But as it turned out, my friend Lana sent me flowers Saturday, and given the day I had Friday it was a welcome and much-needed surprise. So thanks Lana!

Since I had the white backdrop up, I decided to use it for macro pictures of the flowers; these shots wouldn’t have worked against the printed brick background (at least I don’t think they would have) so it was probably best I hadn’t hung the other yet. These even inspired me to zip up to the grocery store and get some more to practice on, but I’ll show those later.

I used my macro lens, my two umbrella lights, my Speedlite on my 7D, and for added fill light in later shots I used a new gadget I bought recently called a FlashPipe – again, I’ll talk about the FlashPipe in a later post, as in these shots I’m sharing today I wasn’t even using it yet.

I don’t have many to share in this post, because editing them was time-consuming for reasons not related to the photos at all (my computer was being sluggish and difficult, and I had to re-boot a few times). But suffice it to say Simon felt he had to get in on the action, and I had to document that: 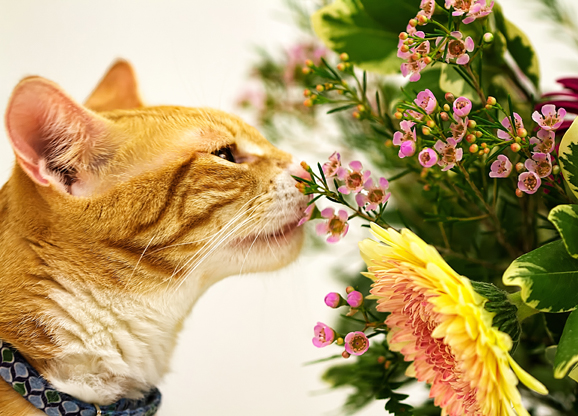 This last shot is actually of the teeny little purple flowers you can see in the Simon shot. I think I got some nice magnification and focus here:

I also used my Dirty Pictures filters on this one, not sure which I prefer:

I’m leaning towards the Dirty Pictures version, but let me know what you think. I know this post is brief, but it’s late and I’m tired, so I’m going to hang it up for now. Much more floral-ocity to come – but to close this out, enjoy a little video I made of Simon playing around behind the white backdrop. something he always does. As usual I forgot to turn my camera into landscape mode, so it’s a silly little strip of a video. But it is kinda cute.