I’d planned to do a more elaborate shoot this weekend, but when I woke up Saturday morning and sat down at my computer with my wake-up cup of tea I noticed something: I couldn’t see. Well I could see, really, but the text on the screen was a bit blurry, and with a little experimentation I realized it was only in my right eye. And things weren’t blurry so much as shadowed – I had a touch of double vision, with the second faded image sitting below the real one. I decided to try and get in to see an eye doctor that day, since I had the time, to get an update on my prescription and see what was going on. I called around and found an open appointment at 2:15 at the LensCrafters in  our local mall. Of course,a mall on a Saturday two weekends before Christmas isn’t my favorite place to be, but I wasn’t sure when I’d have time again to get to an optician and I was a little concerned about what might be going on with my eyes, so I braved the crowds and headed out.

Turns out my astigmatism in my right eye has gotten a little worse – not enough to cause alarm, but just enough to create the double vision I was noticing that morning. Who knows how long it’s actually been going on; I guess my eyes were too tired to compensate first thing in the morning and that’s why I finally noticed it. So by 3:30 I was out of the mall with a new prescription – wouldn’t you know this happens just two weeks after I buy two pair of glasses from Zenni? Ah well. They weren’t expensive in the first place, so I bought two more pair with the new prescription and they should be in soon.

All that to say that I ended up taking photos that required less setup. I got out my macro lens and decided to take pictures of this old Madame Alexander doll I have sitting around. Of course, I had to edit the hell out of them afterwards:

Of all the types of photography I’ve tried, macro has to be the most difficult. Lighting is a real challenge when getting so close to a subject, and the new ring light I bought from Amazon on Black Friday turned out to be a total bust – it wouldn’t even turn on. So, I had to try and use my Speedlight to aim light at the doll, and I was crouching into all sorts of uncomfortable positions, and the lens was terribly heavy, and I had two very warm lights beaming down on me while I crawled all over trying to get decent shots – not to mention that focusing is a bitch too. I only took about 45 shots, and couldn’t tell if any of them were going to be worth anything until I got them loaded onto my computer. Fortunately, there were some keepers:

I had a hell of a time getting the lens to focus on that little cameo pin; I probably took more shots of it than I did anything else. But I think I got good detail out of that one – Topaz Clarity and InFocus helped with that.

The doll, of course, doesn’t have skin nearly as pale as my edited pictures, and the lips are a much brighter red, but I liked the ghostly effect of the desaturated tones. I use RadLab’s Dirty Pictures to add texture, since most of the shots seemed to call for a bit of weathering.

I really wanted a good shot of the doll’s hand reaching out, but in the end I couldn’t get the focus quite right. To disguise that I used Topaz’s Lens Effect to create the split screen you see here.

I don’t know what to say about this, except that I like it – especially how the texture in the lower left corner looks like it’s smoke or something coming out of the doll’s mouth. I really did get some very nice closeups out of this, considering the doll itself is pretty small. In fact, these shots inspired me to go to eBay and buy a cheap lot of fairly worn-down Madame Alexander dolls, just to see what else I can come up with for  them photographically. 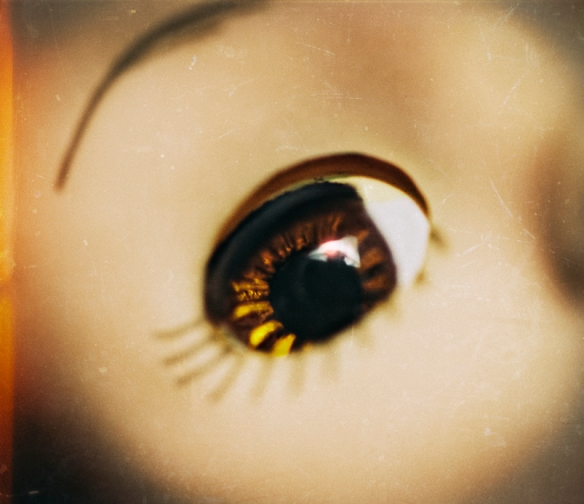 I’m thinking about trying to make them levitate, and other bits of weirdness like taking them apart and putting them back together wrong, or creating some sort of doll/me photo hybrid. Oh, and drowning them. But we’ll see how much of that I ever actually pull off. It’s a weird experiment and one I’ve never tried before, so I have to prepare for a lot of frustration and disappointment. But sometimes, that’s easier to deal with when you’re not also in a wig and ten pounds of makeup. I think this is it for doll shots and the macro lens, though. Until I get a functional ring light that sucker is too difficult for me to deal with.

Mid-term exams are the next three days, so it may be crazy, but the holidays are almost here! Happy Monday everyone.