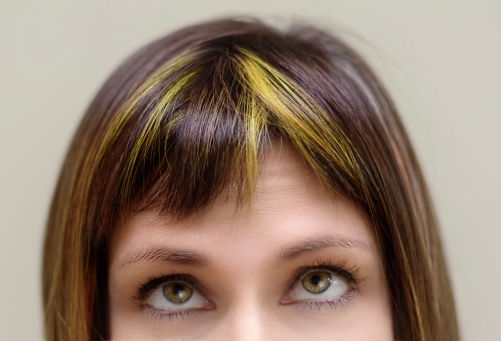 Some of you may remember that I recently wrote about wanting to change up my haircolor again (because it’s been at least six months since I’ve inflicted any real damage on my tresses, which is unacceptable). At the time I wrote about it, I shared the following photo as my inspiration: 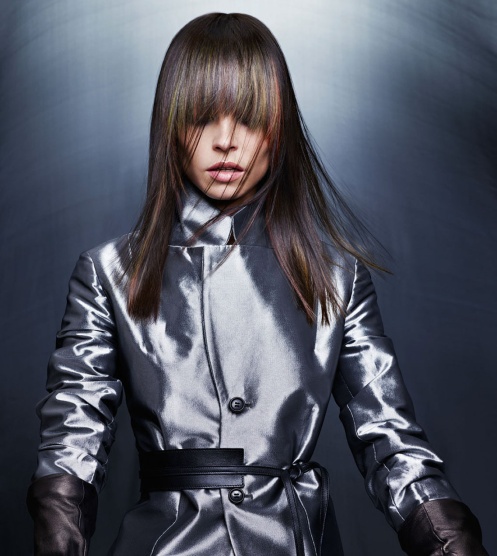 As you can tell from the pic of my fringe at the top of this post, I didn’t quite get there, but allow me to explain (and share more photos)!

This photo was pretty unfocused originally, and I had to work hard to get some clarity out of it, but I liked the view of the haircolor so I made it happen.

The stock photo of the haircolor is from the Goldwell Color Zoom 2017 collection – my stylist had just returned from some big hairstyling shindig when I flipped through the Goldwell lookbook she’d brought back from the event while waiting to get my hair cut about a month ago. I’ve always wanted to do really crazy, unusual color, but I’ve never been able to due to the jobs I’ve held. Well now I work for myself, so I can do what I want – but I still wanted to ease into it and do somthing that incorporated wild colors but still appeared acceptable while meeting with potential clients or particularly judgmental family members (I actually don’t have any family members like that, in fact on my side of the family everyone will love it and possibly go out and get the same thing to done to their own hair – but my father-in-law, who isn’t particularly judgmental, also is not very fashion-forward, as you can imagine, so he might have something to say). So, I thought something like that photo might be a nice place to start, since when you look at it you see some wild colors but it’s so blended it comes off more interesting than outrageous.

This photo is a total cheat; I layered a different picture of the bangs over this one because in the original photo they were parted in a funky way, and I actually layered a second copy of my hair over the first one because my hair is so fine and flat and I wanted to give it some volume. Terrible I know, but I couldn’t help myself.

You can see that the end result doesn’t look too terribly much like the advert photo, but that isn’t really a problem for me because I didn’t expect it to. I understand that photos I show a stylist are merely guidelines and that everyone’s hair is different and will therefore look different from a photo; not to mention that if anyone understands how much editing goes into a picture before it gets seen by the general public, it’s me, so there’s that. Who knows how many Photoshop and lighting tricks they did to get that much depth and and drama out of the original result. But my biggest surprise upon sitting down in  my stylist’s chair yesterday at 10:00 AM to get going with this was that the Goldwell book, which included instructions regarding the proper hair dyes to use to get the look, did not in any way mention any sort of blue color. I was convinced the hair in the photo had blue in it, but my stylist pointed out that the hints of what appeared to be blue were actually silver, and she showed me the instructions to verify that. The colors used were neon red, neon yellow, and silver (I don’t remember the actual color names, but I’m sure they were awesome as all color names tend to be – bright papaya or nuclear lemon or something like that). So, no blue. Okay. 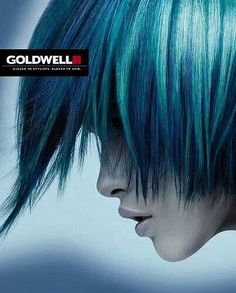 I must do blue hair someday; or maybe green. Or both, more likely.

One thing that has always baffled me a bit about hair stylists is how they often – at least in my experience – don’t explain well the consequences of the choices their clients make when they come in with an idea about a cut, color, or other process they’ve chosen to undergo. Or maybe it’s just me, and everyone else knows to ask for such information. I always end up thinking of that scene in Death Becomes Her when Meryl Streep has just chugged the magic, youth-inducing potion down and Isabella Rosellini tells her there’s just one warning, and Meryl looks at her in her fabulous Meryl way and says, “NOW a warning?!” When I got my may-or-may-not-have-been-a-good-idea perm, I was told after it was done that I shouldn’t pull my hair up or back or out of my face/off my neck IN ANY WAY for at least 48 hours, and if possible to go longer than that. I don’t know, that just seems like something I should have been told before we got started, mostly because it sent my mind reeling to think what could have happened to my perm if the stylist had forgotten to off-handedly throw that  little nugget of vitally important information to me as I walked out the door (I mean really, I came so close to not being told something that could have resulted in me wearing ponytail-head-looking hair for the next six months. Really?!). Or getting a ‘custom’ short cut that entailed getting regular trims every two weeks if I wanted the ‘structure’ that was, in fact, the ‘custom’ part of the equation (‘structure’ in this case was the magic word that made the difference between looking like I had a super-cool, edgy short style or hair that had been gnawed on by wolves). You know, stuff like that. 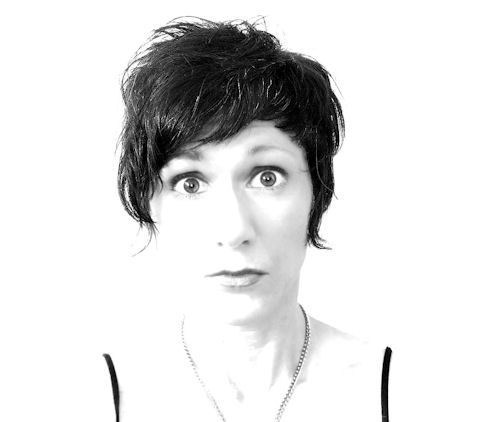 Well, what I wasn’t told this time was that the process of getting these “very thin little highlights of color” woven into my hair would take four hours. Now, I love my stylist (whose name is Gracie, by the way), and give or take a few years here and there where I cheated on her, I’ve been going to her for close to 15 years, so this isn’t so much a complaint as it is an observation. And I do think the process took longer than even she expected (because again, everyone’s hair is different and will take or lift color differently), but when I finally asked about how much longer it was going to take, she explained that to do the funky colors involved stripping the hair first of color, and going through the entire bleaching process and then doing another entire coloring process (which involved coloring, washing out, toning, etc) after that. Perhaps I should have known this, but since the only color I’ve ever done involved adding dark brown to cover gray or bleaching a bit to get some highlights, I had no idea, so a process I expected to take, an hour and half, tops, ended up taking four, and since I got there at 10 AM I was absolutely starving by the time we got done around two o’clock. I was also pretty irritable, which is not usually an emotion I feel when visiting a salon. If I’d known it would take that long, I would have been better prepared. And brought snacks.

So okay, if you’ve read this far you probably kind of have had the experience I had of waiting four hours for my hair to be done. You’re welcome.

See the little peek of silver in the fringe? And my husband pointed out to me that I made my lips look ‘enhanced’ in this photo with too much editing. I tried to fix the problem, but much like real plastic surgery, it could not be repaired. Whatever, I still like the way it shows the color, even if it gives too many of my Photoshop secrets away. And yeah, if I wasn’t both cheap and chicken (and married to someone who’d divorce me if I did it) I’d plump the hell out of my real lips too.

The end result is not quite as dramatic as this photo, as I’ve done two things here – Photoshopped the color vibrancy, natch, but I also shifted my side part from the left to the right to really show the color. Gracie did a great job weaving the color into my hair so that when it’s parted properly, you get hints of interesting color rather than being bombarded by it, but if the wind blows or I change the part to the right side (which I never do) you can see the bright colors lurking just below the surface. The end result is pretty darn cool, although overall it came out far more  red-and-yellow than I expected (if I allow my mind to wander, this takes me to some dangerous places such as McDonald’s, OR the school colors of my former workplace, which are, you guessed it, red and gold – so I shut that internal dialogue down quickly). The silver is there, but it’s quite subtle – in the pic above you can JUST see a hint of it in the fringe, and there’s a long strip of it going down the left side that you can’t really see in any obvious way unless I pull all my hair over to show it off. I realize this was the point, and that I explicity told Gracie to work the funky in in such a way that I could still pull off looking ‘normal’ from a distance (and I do like the idea that if I really want to go for funky I can just part my hair to the other side) but it is a bummer that the silver, which is soooo pretty, doesn’t really show unless I try very hard to show it. That is what I asked for though, so I’m not complaining.

Another little peek at the silver streak

Anyway, this definitely introduced me to the world of truly funky color, so from here who knows where I’ll go. I do think I’d like to do some blue at some point. And another fun side note – my husband didn’t even notice the change. As long as I do not cut my hair short again, he really doesn’t care what it looks like. I do think I had Gracie cut the bangs too short this time; I thought with the new funkier colors I’d like an edgier cut, but as usual I had her go a touch too short and the end result isn’t the best on me (I am terrible about this – any time a stylist shows me a haircut and asks if the length is OK or if I want to go ‘a little bit shorter,’ my answer is ALWAYS ‘a little bit shorter.’ It’s not so much that I want shorter hair as it is my frugal side kicks in and I think, well shorter means I can go an extra week without needing a trim. So there it is). 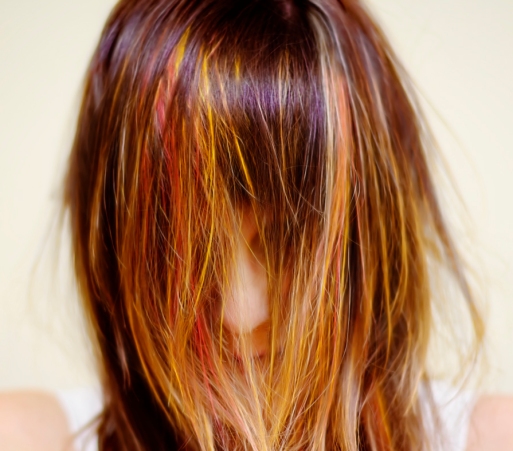 In the end, I like it. It’s a bit more ketchup-and-mustard than hip-techno-mermaid like the original photo (okay, so it’s a lot more ketchup-and-mustard), it’s still something fun and different, and it’s opened me up more to the possibility of doing something really fun and crazy somewhere down the road – who knows what I’ll do next! As long as I don’t cut it short, apparently, at least my husband won’t complain.

In other news, I have more wig reviews to edit and upload, I finally landed another client for tutoring, and I’m heading back for a short weekend retreat to the Ruah center tomorrow. Happy almost the weekend, everybody!