I’m trying with the titles, people, I swear.

Recently I ordered a few floral hair wreaths to use in my upcoming photo shoot on March 17th, and for some reason Wednesday I decided to snap photos of them. Unlike almost every single photo I upload to my blog, these are pretty much SOOC with the exception of one, and I’ll explain that one when we get to it. I did do some RAW editing before converting the files to .jpeg, but that’s it. I did this mostly because it was late in the evening when I took the shots, and I didn’t want to invest too much time in processing them, but also they just didn’t need much work. I used the ExpoDisc again so the white balance seemed fine, and I had my new 50mm lens on the camera which created some lovely, lovely bokeh and interesting focus, so I just kept the editing to a minimum to get things done.

Two of the wreaths are dried florals; one is baby’s breath and the other is dried violet. These two were bought off Etsy from a fairly new shop there called Junkyard Dandelions – they only have one review, and that one is mine. They are both incredibly pretty and well-done, with nice ribbon detail to tie in the back. They’re sturdy but appear delicate and they look exactly like the photos on the site.They shipped very quickly, and the seller/designer was pleasant to communicate with. Also they were not expensive – about $30 each – and for the price I think the quality of these is outstanding: 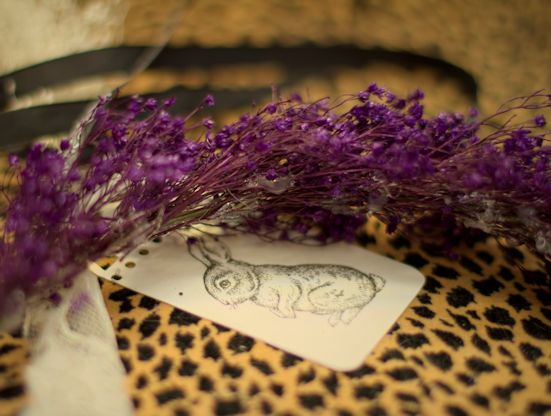 I also bought, from another Etsy vendor, a floral wreath with very large flowers; it was only $20 which seemed like a steal for such a large piece. However, when I got it in, I felt it looked a bit cheap and fake (the flowers are silk). In spite of that, I still like it as I think it will work for other portraits if I end up not using it in this one (it was much more colorful than I really wanted for this shoot anyway). When I photographed it, it actually looked better than it does in person, so it’s all good. Plus, it really was a good deal for the size of the thing: 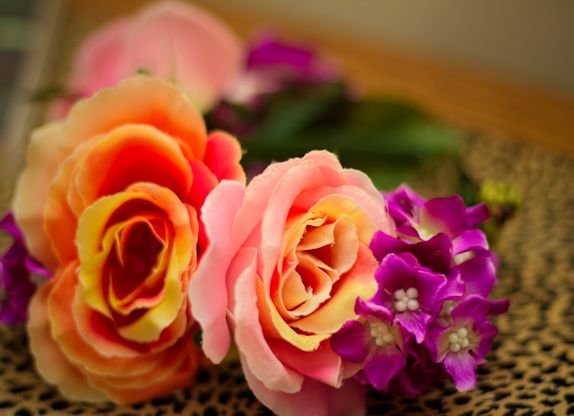 And now, for the grand finale to wrap up this little post, is the one shot I did more editing on after processing the RAW file. When you see it, I think you’ll understand why, because this shot was worth putting out the extra effort for sure: 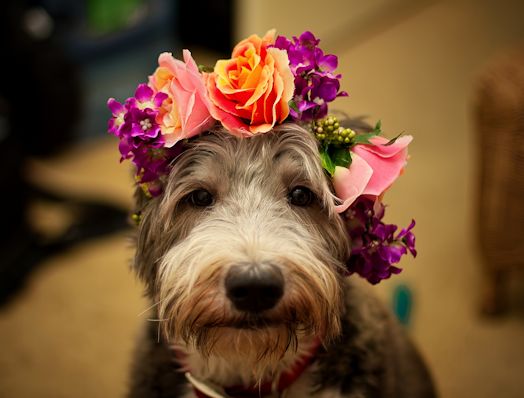 If you ever needed proof that Sprocket is one seriously special dog – photogenic AND patient to boot – well here it is. He is so sweet-natured that even though he clearly did not enjoy having this thing on his head, he sat there with his head up like I asked him to so I could pop off a few quick shots. The framing isn’t great here, but that’s because I did have to snap the shot in a hurry, but it’s still a winner. This beats the time I managed to get a shot of him wearing angel wings, I think. And this shot also gives you a sense of how big that wreath is. Sprocket’s a ninety-pounder, so that sucker is big.

Eh, what the hell, I’ll upload one more Sprocket shot. I processed this one too, beyond the RAW processing. I like his facial expression more in this shot, but the focus was on his nose and it blurred out the flowers a lot, so in my opinion the one I shared above is the better photo of the two. Let me know if you disagree (and the flowers are around his neck here because this was the second attempt I made to take pics of him with the wreath on, and he would not sit still for me to put it on his head again. He just wasn’t going to fall for that twice). 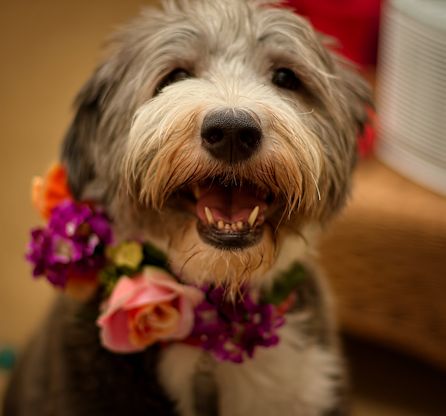