After leaving Rosecroft, we wandered one block up to an usual home for the tour – a new construction, it was built in 2011 by two long-time residents after a fire destroyed the original home. Although from the outside, the house was true to the era of the area’s old homes, my husband and I found the interior to be similar to what we might see in a new home in the suburbs where we live. We didn’t stay long at this house, and I wasn’t motivated to take photos. I get why it was on the tour – to show people that a new home can also be constructed in the area, if house restoration isn’t a potential buyer’s cup of tea – but personally I was disappointed that the interior of the home was so bland.

So, no photos of house number two. Next up was a 3,300 sq. ft. home which was one of the first three built in the area back in 1912. As Lana mentioned yesterday, the trees in this part of town are so old and beautiful, and they feature prominently in my childhood memories. In my great-grandmother’s neighborhood, all the trees were dripping with Spanish moss, and the sound of cicadas would lull us into naptime on lazy summer days. However, all those huge trees made it difficult for me to get exterior shots of this house, as it was barely visible from the street – so you get a shot of the porch instead.

One thing you’ll start to notice in these shots is that the spaces got progressively more crowded as they day wore on, and it became increasingly difficult for me to take photos without random people wandering into the frame. I also became more and more rushed, as I didn’t want to be obnoxious about framing the shots and therefore ruining other people’s experience of viewing the houses (people immediately jump out of the way and wait for you to finish when you’re taking photos, even if it’s just with your phone). It was also incredibly bright outside, so a lot of the shots I chose to convert to monochrome were altered because the outdoor light blew out most of the color in the shots anyway; plus I felt doing so made those blasts of light look more arty and intentional (in several of them, I even went ahead and made the light brighter for added effect).

View one of what I call the den. I’m not sure that’s technically the proper term.

This is actually a split staircase, but because the house was crowded when we visited it, I was not able to get a clear shot of the other side. When taking the stairs from this direction, you would turn right to continue up to the second floor. But if you took these stairs and turned left instead, you’d walk down another set that led you into the kitchen.

The brochure says the wood is silver pine. I say it’s GORGEOUS.

Another shot of the den. Who wouldn’t die for this woodwork?

Lots of smaller spaces in this house too, which I’ve already mentioned I love, so getting the full dining room into the shot with my iPhone wasn’t possible. And when I look at these homes, I just wonder why we feel nowadays that we need so much damn space anyway. In  a contemporary home in our neighborhood, the ‘dining room’ would have to be twice this size to be considered livable, not to mention it would need to be completely open to the kitchen and the den! 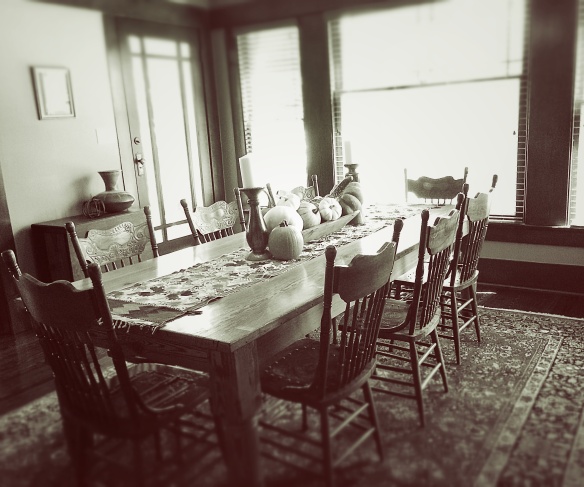 Another shot where the light lent itself to a monochrome treatment. This may be my second favorite shot, behind Rosecroft’s den picture.

This a nice shot of the sitting room – for the life of me, I cannot remember where in the house this was located:

I mainly wanted a shot of how the wainscoting covered the ceiling here too, but I threw the fan into the bargain. Probably should have kept the original color, so you got the idea that this is still in the yellow sitting room. But, my compulsive editing got in the way of the consistency level. Sorry.

So many lovely details in these old homes, like these little sitting areas located beneath many of the windows. This was a consistent detail from home to home – except for the new construction. 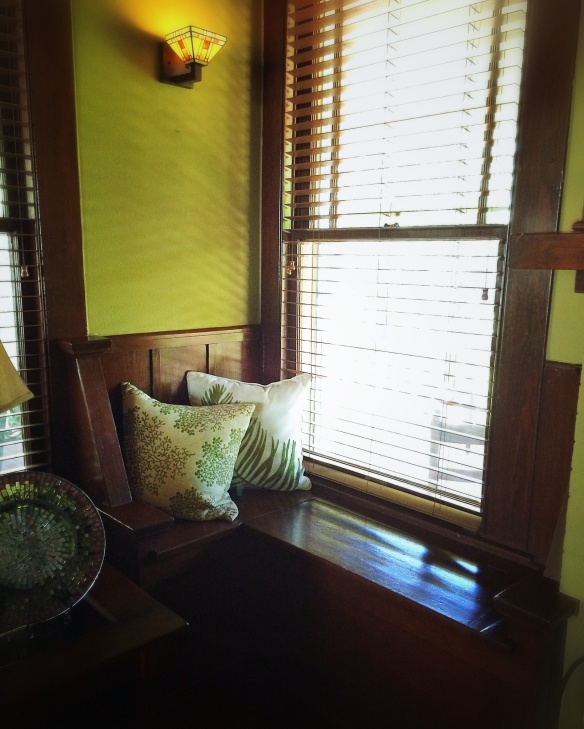 We certainly weren’t nosy enough to check, but you just KNOW this is also a storage area. So many places to store one’s wigs!

I really didn’t find the bedrooms in any of these places to be anything thrilling; maybe it’s just me, but maybe it’s also the nature of these homes to consider the bedrooms less necessarily showy than the public areas of the house. Maybe it’s both. Anyway, this is one of the few bedrooms I even bothered to photograph: 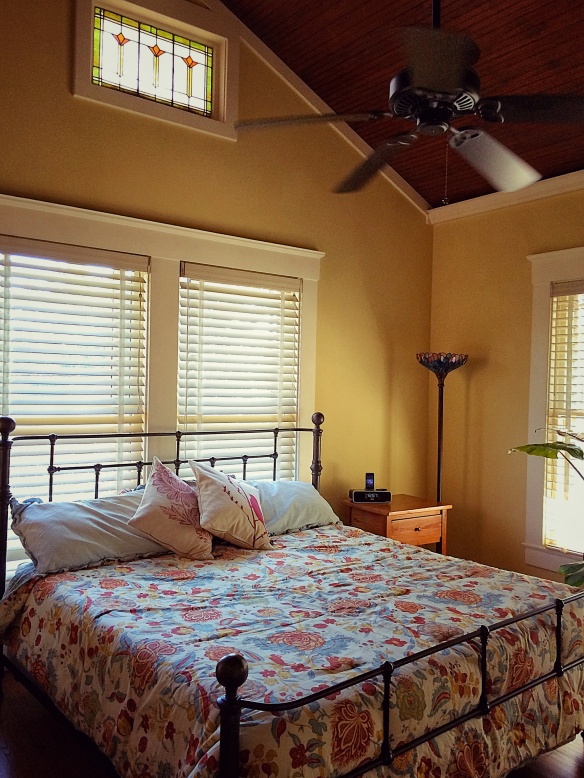 I didn’t ignore the bedrooms on purpose, it just happened.

This house is situated on two lots, so the owners had a decidedly larger outdoor space to work with than most of the others featured on the tour. As a result, it was the only one we viewed that had a pool. I don’t have anything much to say about this one, since clearly it is not a restored feature of the original house, and it certainly doesn’t evoke any childhood memories of the area for me; my granny sure as hell didn’t have any swimming pool in her backyard aside from the little plastic ones she stuck us in when we were small. She did, however, have lots of trash cans in her backyard which she used to burn leaves in on fall evenings (not illegal in the city back then).

Yep, there it is. A pool. You’re welcome. The trash cans must be stored elsewhere.

Up next: one seriously huge-ass house (at least for the area, although still small by today’s standards) that served, in part, as a private school in the early 1900’s, and was also owned by a local church for a while (during which time it was painted purple and, according to our docent, got “pretty much trashed”). While it was too big for me to consider it homey or reasonably see myself being able to live in, it was certainly impressive and stunning. The sunken living area and the kitchen, in particular, are amazing. Come back tomorrow!