Got up about 7 AM Sunday morning, enjoyed a leisurely cup of tea, then got to work on taking photos with the pink Target wig my friend Chadwick sent me from Chicago. Setting up the studio took about 30 minutes, including breaking down the office and converting it into a studio space, then setting up the camera and lighting, then it took an hour so to apply the makeup. All in all, I was ready to shoot by 9:30 and completely done by 11:00 AM, which may be a new record for me. I’m sure the extra hour from ending daylight savings time helped (and am I the only one who does not get up in arms over the whole daylight savings thing? To me, it indicates the start of a new season, so I enjoy it both coming and going), plus I’m not including the reassembly of the office into all of this. I didn’t clean up until late afternoon as I immediately got absorbed in editing the shots, as I always do.

Overall I am pleased with this set. I really went on a marathon today trying to process as many shots as possible, but as usual I couldn’t get them all done. The portrait shots came out better than the jumping and movement ones, because I forgot to change the lighting setup when I switched from close-ups to full-body shots, and as a result the lighting is off on those (too bright and the focus isn’t very crisp). But when I spend as much time on the makeup as I did with this set, and the portraits don’t come out nicely, that’s a real pisser – so I’m happy enough to have gotten some great shots that accentuate the work I put into my face. 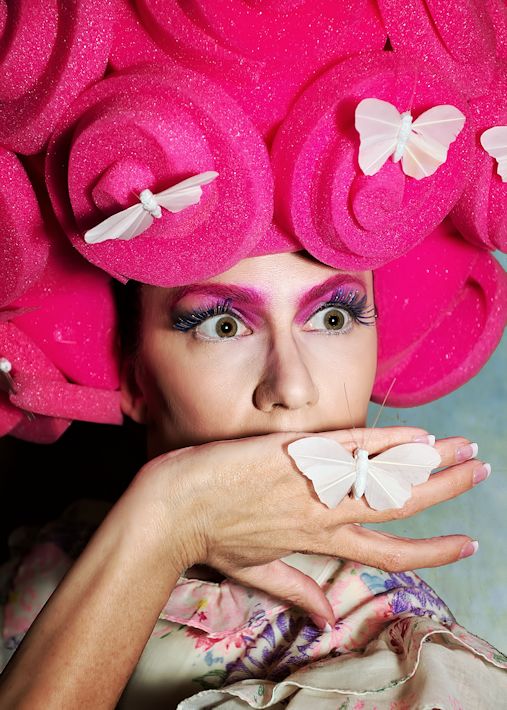 I’m going to share with you a little secret about posing for portraits that I picked up from an online member of a wig message board awhile back: before taking close-up shots with bright lighting like this, I shave my face. I do this because I have a lot of peach fuzz (getting more as I get older, too – thanks nature) and with the amount of bright light that I aim at my face, it all shows in close-ups. It’s always bugged me and I’ve done my best to edit it out, but when she mentioned the face-shaving thing I decided to try it, and I love the results. The woman who shared that she did this lives in Japan, where apparently this is a common practice for all women – peach fuzz apparently is a much bigger deal there than it is here, and is considered very unappealing. I got online and read up on the subject, and it turns out you can go to an aesthetician and pay a hundred bucks or more for a service called dermaplaning, which isn’t much more than a straight-edge razor shave. I use what’s called an eyebrow razor and my husband’s shaving cream, and do it myself (this actually is also great for shaping eyebrows, which is how it’s marketed). It makes the face smoother and the makeup blend and stay put – it looks so much better in photos and is actually the secret of many a supermodel. I don’t believe for a second that it makes the facial hair grow back any darker or more coarse, so no worries about it on my end (I’ve been shaving my little lady-mustache for years anyway; creams burn my skin and to go for waxing constantly is too much maintenance. Never had a problem with it). If you ever want to try it, don’t be afraid of those old wives’ tales about facial growing back darker if you shave it off. It’s baloney. And a good face shave is better than a scratchy old exfoliant anyway – that’s why men always look so fresh-faced after shaving. .

But enough about my face shaving:

Not totally pleased with this shot, but I edited it anyway because you can really see the eye makeup. My eyebrows have gotten sparse over the years, but they are still dark, so I actually used a long-wearing Lime Crime coral red lipstick called Suedeberry on them, then blended the pink eyeshadow into that. I got those false lashes on sale after Halloween at the grocery store, and as you can see they didn’t stay put too well. One of them is popping off there, but hopefully it’s not too noticeable. I can also see on my chin where either my skin was dry or my face powder wasn’t blended very well – that’s how harsh the lights I use can be. Makeup really does need to be flawless, because every little error will show. Not that anyone else would notice when looking at the photo. But I do.

A bit of a weird shot, but I couldn’t resist that shadow on my face that frames one eye. You can also see that I played with layers in this set – all of the shots were taken in front of my beige backdrop, but I changed the color of it to work better with the bright colors of the subject. Also, I got those paper butterflies at Party City over the summer, and finally found a use for them. Unfortunately the butterfly at the very top fell out at some point during the shoot, and I didn’t realize it until I caught it in Simon’s mouth after shooting was done. So I have loads of pics with one less butterfly (More about Simon later – this was his first time experiencing photo day and he was quite interested in what was going on).

Now this shot makes me happy. At some point I applied a bit of talcum powder on my face because it kept appearing shiny and I wanted my skin to look a bit lighter. I think that worked well here, and this is one of the shots I did not end up editing much, as tempted as I was to jack with it like I do most of my shots. I thought it worked as is, and just made a few adjustments. Oh and the butterfly isn’t actually balancing on my nose – kinda gross, but the butterflies were stuck to very thin, long pieces of wire that I was able to stick into the wig to get them to stay – here, well, I have the wire shoved up my nose. Just keeping it classy, people!

I admit to having run out of good ideas for portrait poses at this point, so I often end up reverting to some old standby stances and faces to get some variety. This is a goofy, half-surprised look I seem to enjoy making (probably in life as much as in photos). Sometimes I move the camera around to shoot my face from different angles, but from the sides in this wig you could see too much of the wig cap and my natural hair. These wigs are cool as hell, but not exactly easy to wear. In fact, most of the problems I had with this shoot were due to that wig – once I managed to get it on my head properly, I could not in any way shape or form put my glasses back on, so I had to focus the camera without seeing what I was doing at all, which is less than ideal. It also kept banging into doorways and lighting umbrellas and was just generally a nuisance for self-portraits. But it looks great. It had also, after about two minutes of wearing it, worn off all the makeup on my forehead.

Simon, however, had no such issues.

Speaking of Simon, as I mentioned earlier he was fairly curious about what was going on during this shoot. His main fascination was with my little remote, since I toss that to the ground after pressing the button for each shot. To him, that was a clear indication the item was there for his enjoyment, and he kept grabbing it in his little mouth and scampering away with it. He also got into swiping and biting at my skirt a bit, but not nearly as much as he got into pouncing on the remote.

Although clearly he got into pouncing on the skirt a bit too – as evidenced in this next gem, which was not intentional on my part in any way, shape, or form; in fact, I had no idea what Simon was up to until I saw the shot. I’m sure I felt him landing on my skirt and starting a little kitty-war with it, but at the time I had no idea I’d managed to capture his little ambush on camera:

Eyes on the prize, Simon!

My makeup also didn’t translate well to the full-body shots and I should have slapped on some lipstick for them. So overall, not too pleased with the full-length photos in this set, but that one was too good to pass up. Also, in this shot my right arm actually was in the photo originally, but the angle the camera caught it at was just plain weird, my elbow looked huge and distorted, and overall I found that arm to be a huge distraction. So I just edited it on out of there and figured I’d pretend my arm was behind my back or something. Much better this way.

17 thoughts on “Right on Target”