I decided to play in clothes again today; reading everyone’s comments on my previous post about taking such photos inspired me to do what I want and worry less about how I might be interpreted by others, especially since I’m enjoying shooting outfits from my closet right now – usually I pose in costumes and vintage pieces, but these are all (with a few exceptions – one you’ll see in this post) things I actually wear in my day to day life, which is kinda fun to photograph and share.

I managed to get a few outfits shot outside with my lovely but temperamental 85mm before I lost light (didn’t start shooting until around 4 PM) and had to move it indoors, but that was OK by me as I wanted to experiment with putting different pieces together and that gets frustrating while trying to also shoot outside. I tend to save outfits I already know “work” on me for the outdoors stuff so I can throw the clothes on and get to it; if I want to mess about in my closet and try lots of things on in different combinations, it’s much easier to stay in the same place for the photos once I decide what the look is going to be. 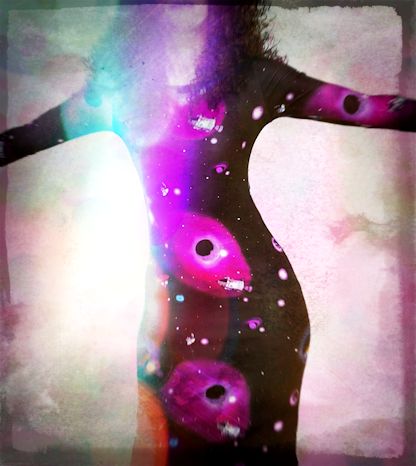 Brought to you by Pixlr, as usual

By the end of the day I had another 500 shots or so, and that’s on top of last week’s approximately 500 shots of which I’ve barely scratched the surface. I know I say this all the time, but I am really going to have to hold off on shooting more stuff for awhile so I can plow through all of these. They aren’t as time-consuming to process as I keep things simple in the final edit, but I have so damn many I want to work with and share that I’ll need at least another weekend to catch up. It’s just that I haven’t quite gotten off the shopping treadmill I jumped on over the holidays, so I keep adding more things to my closet that I’d like to photograph. For example,  I have a few more things coming in the mail this week from ModCloth, so I know I’m going to want to shoot those next Saturday in spite of the backlog.

Speaking of which, the first dress I’d like to share is from ModCloth, of course, and it’s an absolute stunner. It was on clearance for $16.99, and although there is no way in hell I’d ever wear this thing out of the house, I thought it would do a bang-up job in photographs, and I was not mistaken.

My favorite shot from the set

Most of the reviews for this dress said that it was clingy but looked fabulous, which isn’t untrue, but this is way too tight for me to feel comfortable wearing it out and about. That said, the material is nice and thick so it does a decent job of containing and concealing the body’s imperfections; my main issue with it is how I look when not standing in perfect lighting while perfectly posed (which isn’t great). That said, I’d like to add that in none of these photos did I edit my body in the slightest, it’s all me although there were certainly plenty of photos that did not present me in the most appealing light. I edited the shots in my usual manner – color edits, clarifying/sharpening detail, smoothing skin, removing undereye wrinkles, etc. – but I didn’t slim down the curve of my thighs or smooth out lumpy bits like I usually need to do when wearing something this clingy in a photo (which isn’t often).

Oh, and Spanx. All the reviewers mentioned the necessity of Spanx, and I followed their advice.

I get why people would like this dress in spite of it’s clinginess, though; as I mentioned it’s sturdy enough to hold everything in place a bit, and the dark fabric helps to further conceal imperfections. 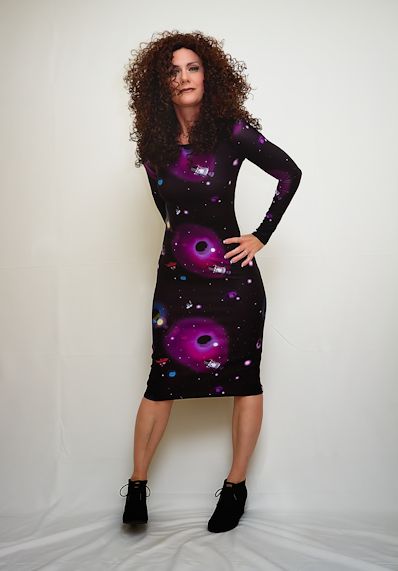 It was not, however, a good jumping dress. Doesn’t move at all plus the print gets crumpled.

As you are about to figure out, I edited a lot more of the shots in this dress than I usually do for one look. It’s not just that it makes my bod look pretty great, it’s that amazing print. That’s what really drew me to the dress in the first place; the colors are lovely and the idea of it is unique but not totally crazy – when you first see it, you think wow, that’s a bizarre print for dress, but then right on the heels of that you think, no wait, it’s the perfect print for one. The length is a little awkward, but other than that it’s terrific. So, I processed a LOT of shots of me wearing it. 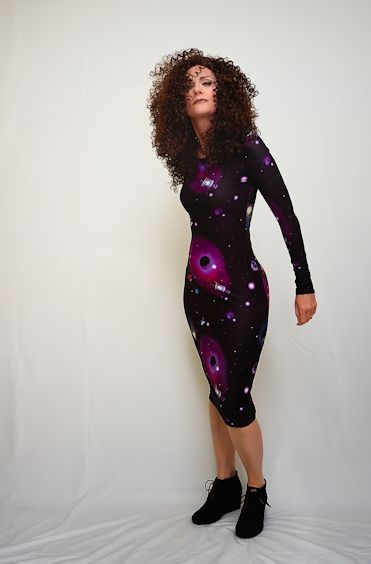 It’s not often I can wear something this tight and not look badly proportioned; maybe it’s the long sleeves balancing out my small upper half with my ample lower half. I almost wish I was brave enough to wear this out somewhere, but before you start trying to talk me into it, don’t think I won’t show you a few of the bad shots of me in this thing to change your mind. Because I have plenty.

This, however, isn’t one of them

On a completely superficial note, it’s still funny to me to hear women say they wish they had my shape, my lower half in particular. I spent decades of my life hating my butt and my thighs, and then somewhere in the 00’s big rear ends became desirable which helped me to accept my shape. Whether that’s good or bad, I don’t know; I suppose I should  have been able to get past it on my own, but that’s not how it went down for me and it’s too late anyway. I just needed society to validate me, is all. Moving on. Not only that but friends of mine say they’re jealous of the junk in my trunk; that never happened to me when I younger and my junk was less, well, junky. I’m not going to get into my body issues in this post, but I could talk at length about my thighs and how much I was tormented by them when I was a teenager (my mother would poke at them and say “Can’t you DO anything about this?” on a regular basis). Bottom line is (pun intended), I am not tormented by any part of my body anymore. It is what it is.

And what it is at the moment is wrapped in a seriously fabulous dress. Oh, and Spanx. Lots of Spanx.

And in case you’re wondering how  I manage to pose myself so I don’t need Photoshop to make me look curvy in all the right places, here’s my secret – I always stand with my upper body leaning slightly forward while pushing my hips back to de-emphasize them. You will never see me sticking my hips forward in a photo; I’m always leaning slightly forward with my upper body to emphasize the part of me that’s smaller. Go back and look at all the photos in this post, or any post, and you’ll see the same basic stance every time – upper body forward, lower body shifting back. Too bad I can’t walk around like that as it’s how my body looks best, but I haven’t figured out a way to walk while leaning forward and sticking my butt out. Yet.

Oh and if you’re wondering – I have one arm  behind my back in so many photos because I was holding the remote with that hand. You’re welcome.