Inspired by one of Leanne Cole’s recent posts, I decided this afternoon to pull out my macro lens and give that thing another go. This time, I rolled out my black backdrop, set up a TV tray covered with a black blanket, and aimed two umbrella stands with gold reflectors at it so I could control the environment and lighting better than last time when I just walked around with a ring light shooting objects at random (and yes – it was definitely easier to get things set up and work in my de-cluttered office space).

I took some fairly cool pics of this wooden Buddha I found underneath our bed while cleaning one day this week – we bought it in San Francisco while on our honeymoon, so who knows how or why it ended up there. Most things in our house end up under the bed at some point or another, so that’s probably explanation enough. Anyway, the macro caught a lot of dust in the cracks and crevices of the figurine that I’ll attempt to edit out – I haven’t actually processed those shots yet. Then I took some pretty cool pics of some perfume bottles that I also want to edit and share, but the first ones I processed are actually the last ones I took. I decided right before I packed up to put some cat treats on the TV tray and see if I could get Simon up there for some macro shots, and it turned out better than I expected.

Lemme tell ya, that macro lens is hard to work with. I think I’ve mentioned that before, but this time the problem was its weight, and that my cheap tripod had problems holding it steady. I’d focus on something, adjust the tripod to hold that focus, and when I let go of it the lens would immediately drop down below my focal point due to its weight. I ended up having to set the tripod above where I wanted to focus and hope that when it dropped, it would be where I wanted it. Not a very precise method. I also decided to set the shutter to remote triggering so I wouldn’t wobble the lens any when I took a shot. But with Simon I didn’t want to have a 2-second delay, so I just snapped away while he ate (in the shot above my husband had actually whistled, which cause the cat to look up) and hoped some of them would be in focus.

I didn’t plan the Simon session out very well – I’d been changing the ISO settings and lighting for each object up to this point, but putting Simon up there was a spontaneous thing, so I think the color is off (as I mentioned already, I was using gold reflectors so the light was very warm, which is nice for objects but not for animals or people) and the light was too bright,. But overall I’m pleased with how these turned out.  And I love the cat against that black background – pretty slick looking. 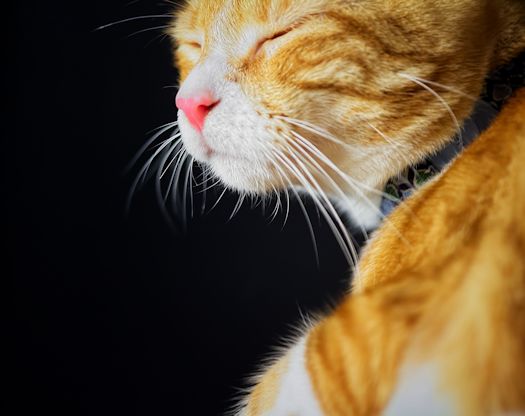 Is this cute or irritating? I’m not sure.

Another discovery tonight – setting up a TV tray to place objects on for macro shots meant I was on my knees for the entire shoot, which, with my middle-aged knees, got old real quick. Next time, self, find a way to shoot objects at eye-level so I can stand, thanks. And in spite of the tripod, all the adjusting and re-adjusting of the camera meant my arm still got tired. So (and I know I’ve said this already too) it may be time to invest in a better tripod at last.

I think the first one and the one directly above are the best of the bunch, but I liked so many of them I had to edit them all. I’ll share the Buddhas and perfume bottles later when I’ve had time to edit them. My friend and I are hitting the Galleria tomorrow for a little start-of-summer shopping, so I’ll be indisposed most of the day, but I may sneak my little SL1 into my bag and see how many pics I can sneak while I’m there. Here’s one more of Simon to finish this post off:

Simon about to attack a treat

Oh and I also discovered tonight that I am NOT a good nighttime videographer. Like, at all. The International Space Station has been flying over our city all week, and Doug and I have gone outside a few times to watch it pass over – the mosquitoes are hell right now, so we try to make it a quick trip. Tonight I decided to try and film it with my camera, and what I got was six minutes of blurry sky because I completely aimed the lens in the wrong place (my 7D will only film in Live View mode, which I do not know how to use at all, and I just could not see what to aim at without being able to use the viewfinder), Anyway, out of six minutes of film I managed to get five seconds of Space Station in the very bottom of the frame, so being me, I uploaded it anyway. And here it is – five wobbly seconds of the ISS floating over my driveway!

10 thoughts on “Getting Catty”