As a little sidenote to yesterday’s post: I often spend an hour or so in the morning reading about new lenses and/or other photography gadgetry to try. Sunday morning I stumbled across a great blog titled “The Phoblographer” and saw an article in the sidebar called “The Best Budget Lenses.” Well, always looking out for a good deal on a new lens, I clicked on over to the article – and wouldn’t you know that for the Canon I own them all already. While on the one hand, that’s great and means that I did my homework well before making my purchases, but on the other – well damn, you mean there’s nothing new out there I need to buy right now? And by the way, guess what lens that blog just looooooves? That’s right, the 40mm pancake lens I was bitching about yesterday. Then again, if I had a penny for every time I bitched about a new lens I ended up loving later (hello, 85 mm, I’m talking to you), I’d have a whole mess of useless pennies sitting around for Sprocket to eventually eat. Moving on.

Did someone say ‘pennies’? Cause I’m ready for lunch.

It’s  also hard for me to consider a $600 lens a “bargain” one, as the blog post considers my 100 f/2.8 macro lens, but I do get that in the realm of photography that’s inexpensive. And hey, it’s not like I couldn’t find a way to get my hands on one, so I suppose that does mean it’s affordable (on eBay, for less than the $600 asking price, thankyouverymuch). Since I am still struggling to see the awesomeness of the thing, it surprised me to see it on the list (along with the 40mm), but it at least confirms that I was right to buy it and should continue to invest my time and energy in learning how to use it. On that note, here are some more macro shots I took Thursday with this lens:

Even though I titled this photo “Perfume Bottle” on Flickr, I still got mostly “WTF is this?” comments about it, which either means that people don’t bother to read titles or they just did not know what the hell to say about this. It did not get as much of a reaction as I was expecting, as I considered the photo cool as hell, but when people follow your stream for one kind of photo primarily (my self-portraits) it always throws them when you upload something not of that vein, so I get it. Still, I was so pleased with this and it bummed me that not a lot of other people were interested in it. Not a big deal, it happens, and if I had a penny for every photo I shared that did not get the reaction I expected, Sprocket would sound like a dog maraca everywhere he went because he’d be so full of loose change.

I did not notice the terrible cloning job I did on the blanket until after I finished processing this shot, and overall I don’t like it enough to go back and re-edit (the line of white fuzz was just one section of white fuzz I somehow managed to drag across the entire shot when trying to clone it out – I am not good at using the clone tool, obvs).I’m only sharing it here to show the entire perfume bottle from which I got the first shot.

I like this one too – I loved the light and color I was able to get out of these. Not so sure about this next one though:

I can’t tell if the blur there is cool or awful. I was manually focusing, which I am not good at, and I thought I got the top of the star in decent focus, but maybe I didn’t…? I don’t know; this one has me baffled. Moving on to the next bottle I shot:

Ooooookay, now, I love this shot. I think the lighting is fab and the color is tasty. But I must complain about some of the comments this one got on Flickr. I mentioned in the description that it was another perfume bottle, and that the perfume was called “Meow,” and I in no way made any connection to that other word for “cat” that starts with a P and how people might relate it to scent. And damned if a few of my long-time followers didn’t make jokes about that very thing, and relate it to, well, my very own P. Look, I’m an open-minded gal with a sense (scents?) of humor, but those comments were a bit too familiar for my comfort. I debated about how to respond, then decided I wouldn’t respond at all and just deleted them instead. It irritated me enough that I started to take the photo down, but some other people left nice comments complimenting the very things I love about this photo (lighting and color) and as I said already, I really like this shot, so I wiped out the comments and moved on (not to mention that Rebecca’s comment asking about “a litter note” in the perfume was brilliant and totally slayed me). Before deleting, I did consider responding to them by informing them I didn’t think the comments were funny, but then I thought through all the drama I’d have to endure if I did that, and the defensive, hurt feelings such chastisement would generate, and I just hit delete. The people who commented in that manner are people I know and have followed for years, so I’m sure they didn’t realize I would find the statements in poor taste and take them personally. More so than taking it personally, though, was my concern about allowing those comments to sit out there in a public forum and encourage more of the same from others. Moving on.* 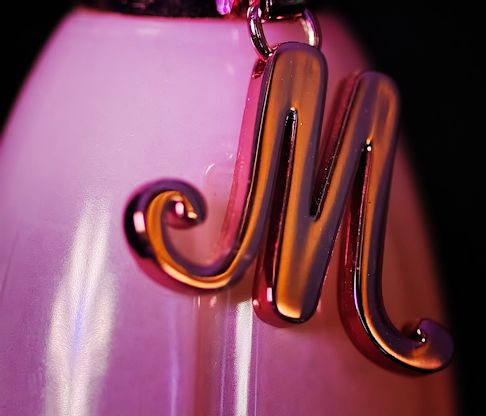 An “M” for “moving on.” In fact, as much as I use that little phrase on the blog, I think I should start using this as an icon for it every time I say it. Yep.

*Except – major digression – I am not moving on quite yet, because I just thought of something hilarious I must share. Years ago I got seriously into collecting perfume. It was a much more expensive and less useful pursuit than purchasing camera gear, by the way, because you simply cannot keep buying and trying different scents constantly while simultaneously using up the scents you’ve already bought – it’s just not possible, and I ended up with cabinets stuffed with bottles I could never possibly use up. It was ridiculous, so  I made myself quit. However, when I was in the throes of my obsession I stumbled across this scent called Rose Poivree that was reputed to smell like a woman’s, um, Meow – and even though such an aroma has never been a goal of mine, I became so curious about it that I just had to buy a bottle, because perfume collectors are always after the unusual, and this sounded like nothing if not unusual. After it came in the mail, I spritzed some on and went about my business; then my husband came home from work a few hours later, walked into my office where I was working, sniffed loudly, crinkled up his nose, and said, “I think the cat peed in here,” and walked out. I listed the perfume on eBay the next day and sold it for exactly as much as I bought it for – to a man. 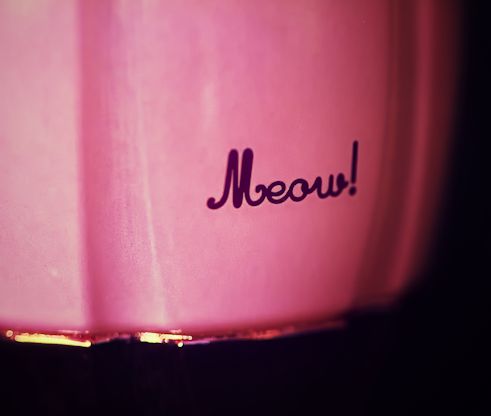 This isn’t a great photo, but since I took it and processed it I wanted to share. The grainy appearance isn’t due to the lens; the bottle had residue on it from who knows what – it’s been sitting in a cabinet since I bought it and it probably has gotten mist on it from other perfumes, hair spray, lens cleaner for my glasses, or any other number of things over the past year or so that I’ve owned it. So that’s what all that grainy texture is. By the way – although perfume bottles are little works of art in their own right many times, it’s best not to store them out in the open as bright light can turn a scent. Keep them in a dark space at room temperature and they will last longer. That’s why many times really expensive perfumes won’t have elaborate bottles; the perfumers do not want to encourage people to leave the bottles out on a dresser (like my beloved Frederic Malle and my favorite scent, “Parfum de Terese” – gorgeous scent,  boring bottle. Oh, or L-Artisan’s SafranTroublant – another amazing perfume).

One thing I did notice about macro photography when searching for groups where I could share these on Flickr was that it is mostly flowers and insects – I even found a group titled “Macro Photography, NO FLOWERS OR INSECTS PLEASE” – and as usual, here I am with a bunch of photos that are sort of geared towards a certain community but which don’t quite fit. Sigh. It seems that I am always outside the norm in some way when it comes to stuff like this, because good Lord I abhor insects and would never try to photograph one as just looking at them makes me itchy and nervous, and flowers are fine and all but not something I’m overly excited about trying to photograph. Water drop macro shots are really damn cool (Corrie White’s stream on Flickr is, like, THE COOLEST), but I’m not ready to tackle them yet although I probably will at some point. So for now, my perfume bottles and whatever else I manage to snap with a macro lens are going to hover around the outskirts of the macro world, not quite fitting in but hopefully being rather cool nonetheless. Who knows – maybe even with macro photography I fall more into the fashion camp than anything else. These might not be awesome macro shots but they’d be hella cool magazine adverts, maybe? 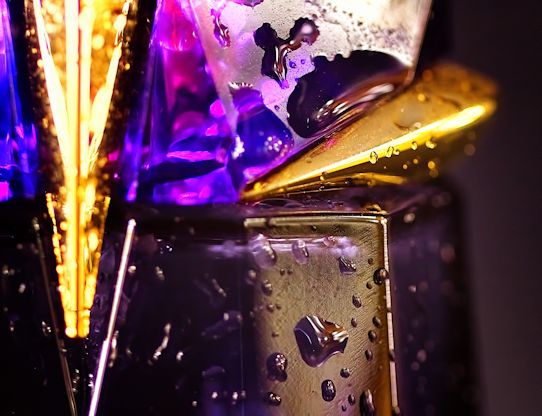 I thought this bottle was cool, but the shots suffered from macro photo fatigue as my arm was sore and my knees were starting to go stiff so I didn’t work very hard to get good shots of it. I sprayed the bottle with some water because this one had the same residue all over it that the Meow one did, and I thought the water drops might conceal it a little. The perfume is called “Alien” by Thierry Mugler, and when viewing the whole bottle it does look quite Battlestar Galactica. It’s a very weird scent too; one that I didn’t like at first but that was so strong (one spritz really will last all day, powerful stuff at only $60 bucks a bottle) it kind of grew on me, plus it calms down after the initial spray into something quite unusual. It has a rubbery scent I find appealing, but then again I love weird, strong, earthy/tobacco-y/rubber-y scents more than anything. Don’t get me started on Bulgari Black, which is a men’s cologne with the claim to fame that is has an actual rubber note. It’s ah-maaaaazing. Plus, the bottle looks like a tire.

Oh dear, I need to get out of this post before I start up my perfume obsession again. Literally while writing it, I realized I was almost out of Safran Troublant and went and bought another bottle. Happy smelly Monday, everyone!