I’ve had a chance to edit a few more flower photos, but only a few, so here we go. 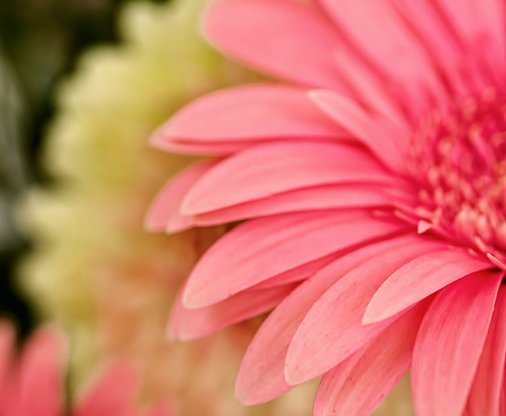 I really struggled with the color on this one; that yellow flower in the background looked very dark and muddy and it was distracting. I ended up using Rad Lab filters to take the saturation way down, which did the trick, but it washed out the pink flower too. In the end I still liked it, and the softer tones worked, but it was much brighter in the original. The yellows worked better in this one:

One thing I did differently when using the macro lens this time was to place the subject, the vase of flowers, on the floor so I could sit down and crawl around while photographing it, as well as being able to stand above it easily. This helped me get good angles but more importantly, it kept me from getting tired due to all the stooping and bending into strange positions I had to do last time I used the lens, when I had the subject on a table. I also attached the 7D to a monopod to hold it steady and rest my arm a little. Both strategies helped. I took most of the 500 or so shots with manual focus, too, to control the focal point better. I think all these things helped make the shoot more successful than my last attempts at using the macro lens.

About half the shots I did were taken with my umbrella lights only; but when I tried to get really close-up they were coming out too dark, so eventually I attached this little piece of magic I purchased recently called a FlashPipe – it’s a cylinder made out of some sort of plastic which slips over an external flash to give out an even and soft diffused light. I’ve used my Speedlite when shooting macros before, but it is hard to control the light when aiming in so close or leaning in at weird angles; the FlashPipe did a beautiful job of filling in shadows where I needed it without overpowering the subject.

This next shot is one I took with the FlashPipe; I have more to come using it and I may do some comparison shots so you can see the difference it made (I also spritzed the flowers with water at this point for added interest). But for now I just have this one:

The nice shadows and sharpness aren’t all due to the FlashPipe there; I did use RadLab and Snapseed to add contrast and detail as well as tone down the color, which was a bit too bright initially. But still, it did a wonderful job illuminating such a close shot without blasting out the subject or creating odd shadows. And it only costs about $30. Of the three I processed today, this was definitely my favorite – I’m thrilled that I finally got some genuine macros out of that lens!

In case you missed it when I mentioned it above, yes I did take over 500 shots of these flowers that Lana sent me as well as the ones I bought from the grocery store (Lana’s were pink and yellow, the grocery store ones are blue, orange, and green). So there will be more coming as I’ve just scratched the surface here of what I took.