I said I was gonna ghoul myself up a bit, and I sure did try:

My inspiration for the makeup was drag queen Sharon Needles; I pretty much  attempted to steal her look, but as usual the end results weren’t an exact match. I added blue shadow under the black to give the eye makeup more dimension, and although I tried to copy her lips I didn’t quite pull it off. Other than the makeup, I didn’t have much planned for this set but to look ghoulish and make strange faces, so I did several wig and costume changes while messing around with the lighting so I’d have more to work with when editing. 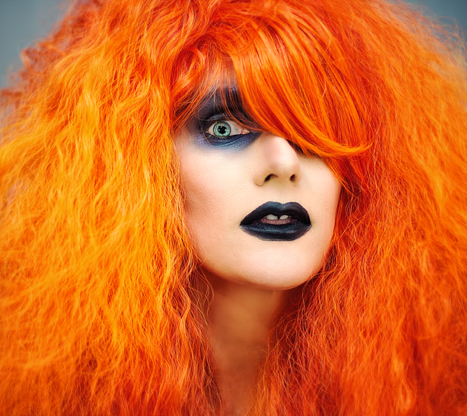 I used Photoshop to change the eye color as I do not possess the commitment level to purchase zombie contacts and get accustomed to sticking them in my eyes. I even tried to put a little gap between my teeth, but I’m not sure you can really tell. And let me just say that black lipstick is a bitch to wear in photographs because it fades and bleeds easily and the results are often sloppy, so I had to get creative when editing to conceal the mess as much as possible.

And speaking of messes, one more creative idea I had for this shoot is something I’ve wanted to try for a year or so. The inspiration is taken from a CocoRosie video called We Are On Fire; in the video, the singers jump around in slow motion while this strange liquid that looks rather like blood flings out of their mouths. It’s not gross or gory at all, rather, in the slowed-down motion of the video it looks interesting and creates some unusual shapes. I’ve always wanted to try it myself, and today with my creepy face I decided it was the right time.

There was some Hershey’s syrup in the refrigerator, and even though it was expired by about a year (don’t judge) I figured it would do. I dumped some into my mouth, hit the remote, and attempted to fling it out by whipping my head around, but it was too thick and nothing happened beyond a little spilling down my chin. This left me with a huge viscous wad of expired chocolate in my mouth, so I went to the bathroom and spit it into the toilet, which seemed to be the most logical place since it was a pretty big mouthful. This will be important later.

I figured adding a little water to the syrup might help me spit it farther, so I took another swig of chocolate sauce, a little swig of water, and hit the remote a few times while trying to gracefully sling the liquid about in a ghouly, arty manner. When I thought I might have gotten a good shot or two, I spit what was left of the chocolate into the toilet again, and went back to look at what I’d gotten. And ohhhhhhh dear. Let me just say, that chocolate sauce with water added does NOT look remotely like blood. It looks like – something else I won’t mention, and there it was dribbling out of my mouth in a bunch of photos. It was so incredibly disgusting I deleted the shots while they were still inside the camera. Just looking at them almost made me sick…and to make matters worse, it was about this time my husband decided to take a little trip to the bathroom and lift up the toilet lid…his screams of horror could probably be heard around the block, as I’d forgotten to flush after spitting all that chocolate sauce into it. So there you go. If my photos weren’t sufficiently ghastly, I bet that story will give you shivers. You’re welcome.

Last shot for now, but more to process later: