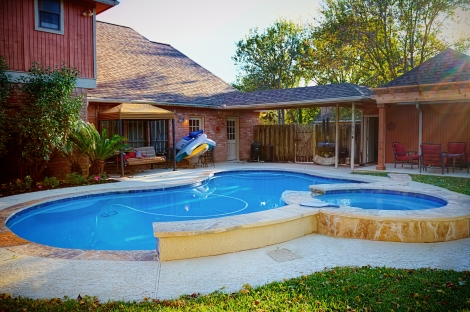 Pardon the canopy swing sitting awkwardly next to the house, and the pool floats piled on a chair. We’re still getting things tidied up a bit, and we have some more work to do on our new covered patio (staining, mostly) but for the most part, things are done. It’s gotten a touch too cool to swim regularly, but I do fire up the spa every evening and sit in it for at about an hour.

All in all, we started this project right around August 1st, and finally got the grass replaced (which is what finally made things feel ‘done’) the first week of November. It took WAY longer than I thought it would to get from start to finish, but I must say it has been worth it.

A lot of people have seen photos and commented on the relative lack of landscaping we now have in the backyard; we took out all the beds that run along the back fence and just left a single small one in the far right corner, so we could keep out bottlebrush tree that the hummingbirds love so much. I guess it does look a little bare back there now, but we needed to create enough space for our dogs to roam around in and do their business, lest they end up having too small space that was too close to the pool for them to relieve themselves. See, when I put it that way, it doesn’t seem like a bad idea at all to keep things sparse in the backyard.

Besides, I rather like the lack of foliage back there; our yard was a decent size before the pool, but not huge, and it definitely felt a little cramped once the pool was put in and before those overgrown beds were taken out. We had one sago palm that we really liked back there that we did save and move to the flowerbed we kept that’s up against the house, but aside from that and the bottlebrush tree in the corner we yanked the rest of it out. There are plants added to that corner bed that will eventually fill out and eliminate some of the sparse feeling, but overall I like the changes.

This new pergola was built for us last week; it still needs to be stained and will be much darker, and we’re having a gutter company come out to move that drainpipe over to the end of the garage. We’ve also ordered some lovely new furniture that should be in by the end of the week, and believe it or not my husband wants to get an outdoor flat-screen television to hang on the garage wall – but I kinda doubt that will happen. I believe those things are ridiculously expensive.

We are finally, basically done! Who’s coming over?

9 thoughts on “Too Cool for Pool”