It’s been a minute since I posted anything, but I’ve been busy, y’all. 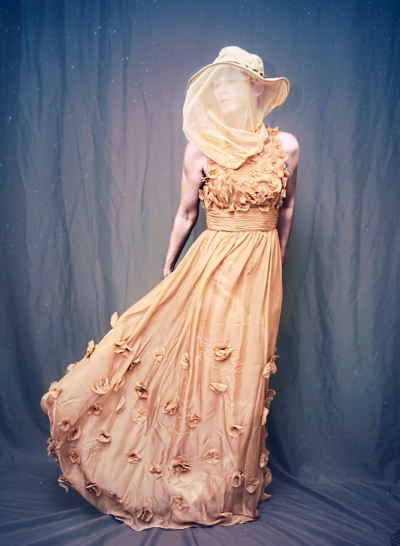 Not busy doing much posing, though. This is from last month’s shoot.

First, I am still working on my website and getting my business together, and yeah I know, I really need to get a move on with it. Every day I get a little bit closer to opening up shop, and every day I feel a little bit less resistant to the idea. There are so many unknowns, and I’m just old enough to feel a touch more threatened than excited by them, but in the end I can at least say I gave it a try. So, there’s that. Plus, I have been fighting the temptation to continue to think about work on ‘school time,’ since that is one of the benefits of venturing out on my own instead of going back into a traditional classroom, so the rebellious part of me purposely wants to keep vacation going for a few more weeks, even though teachers here have already returned to work and the students will be going back soon. Not the smartest business move, probably, but it is helping me to break free of that old structure that ended up not working out for me and to appreciate the benefits of doing things the way I am now. Either that or I am a procrastinator working too hard to justify it to myself. Moving on.

At least I sound good on (virtual) paper

Also, since I came back from my second trip to the Villa de Matel’s retreat center (the actual center is called Ruah, but I generally just refer to it by the convent name) I’ve been wanting to edit a lot more photos of the place so I could share them here, and that’s been slow going, but I think I have enough to give a decent representation of it now, even though I still don’t have as many photos edited as I would like. This entails processing photos that are less artsy and more representative than what I usually work with, so my motivation has been a little low, but I’ve done my best to still have some fun with even fairly straightforward shots that mainly exist to simply show what a room or balcony looks like. I am going to write a different blog post to share those photos, though, as I’d like to focus solely on the convent when I show them.

Third – and I addressed this briefly in my last, almost picture-free blog post – about three weeks ago we got a kitten, and well, she’s a kitten, y’all. Which means at various times throughout the day she is a nightmare. And one of my favorite times to write blog posts and edit photos is in the evening, sometimes moving into nighttime, and this happens to be one of Violet’s most INSANE parts of her day. She will sleep all day and then, around 9 PM, she wakes up and goes berserk – so I guess we can take that term nightmare literally. 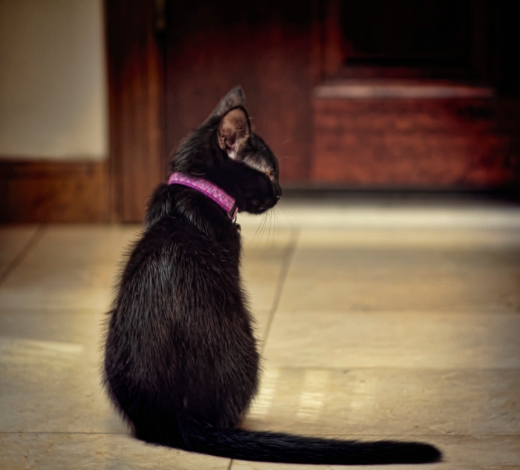 Violet is hard to photograph – she moves as soon as she sees a camera, and she is so jet-black that with her eyes closed, she’s just a blob in photos

As soon as I get going editing photos she’s all over the place, including my desk where I work, knocking over water bottles and stepping on the computer keys and trying to eat every single cord she can find – you know, the usual. Not to mention terrorizing our other animals (who take it in stride, and Simon for the most part has adopted her as his own) and managing to crawl into the strangest of places and get stuck there. Oh, and she also had coccidia when she came to us, and in spite of my best efforts to keep Simon from getting it too, it happened. 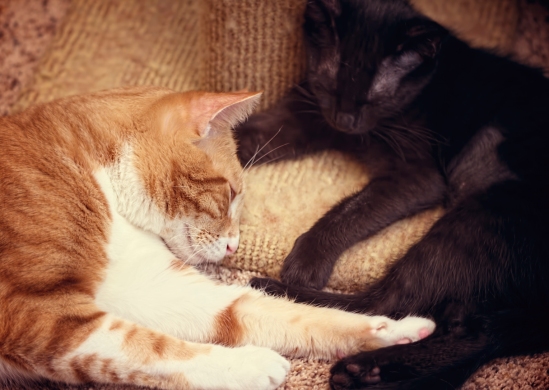 In sickness and in health, apparently

I am not kidding about my efforts either; I would clean out a litterbox as soon as it was ‘used,’ I had each cat’s litterbox in a separate room, completely cleaned out and replaced the litter and wiped the boxes down with Clorox every 2 days, you name it – only to walk into the den and find Simon happily LICKING VIOLET’S REAR END. Great. I was told the best way to stop the spread of it was to keep the two cats separate, but for ten days? Simon was practically scratching his way through the door of the room where I tried to isolate Violet, so that just wasn’t going to happen.

Also – about two weeks ago I filmed at least five wig review videos, mostly of fun little inexpensive shorties. When I went to edit the first one, I realized that the slightly darker shade of foundation I’d bought to compensate for the sun my face has gotten from spending time in the pool did not blend well at all with the DermaBlend foundation I use to cover the sun damage on my neck (which I didn’t think to replace with a darker shade), and when I turn to show the profile of the wig there is a HUGE LINE around my jawline that looks ridiculous. Argh! And I look like this is at least FIVE VIDEOS! And of course, since they’re all shorties it is painfully obvious. Eventually I will suck it up and post them anyway, because I really don’t want to re-do them, but it still pains me to see it now, so I’m still putting it off.

I did get a Jon Renau Diane last week and a Georgia by Noriko in Champagne-R, but filming is on hold for the moment as I focus on my new business and our new kitten (I can’t imagine trying to film or pose for photos right now with Violet, and by extension all the other pets, going nuts). I’ll get around to it soon enough.

Oh and one more thing: I am American, so I feel the need to say this – Donald Trump is a narcissistic, ignorant, overblown human Cheeto who has no business being in this presidential election, and the people who handed the candidacy to him have put our entire nation at risk by doing so.

It is beyond my comprehension that the human Heat Miser is about to receive classified security briefings; the very thought of it actually fills me with both fear and rage. Trump is a rabid liar, intellectual black hole, and white male privileged shit-stirrer, with no consciousness or caring about how his words and actions influence the world around him – and the fact that the Republicans gave him a platform to treat the entire country like the biggest catbox he’s ever crapped in on a daily basis represents, to me, a complete and utter disdain and disregard for the dignity and safety of our nation. Trump is the most dangerous sort of buffoon ever, and he actually makes me long for the days of George W. Bush – something I did not think was possible. He’s already lowered political discourse to the level of commenters on YouTube, and opened all of society up to nurturing the worst, most base elements of it’s psyche – damage I don’t think can be undone for a long, long time. When I see young people rallying behind this human traffic cone in a toupee, I weep inside for the future. Be you liberal, conservative, or anywhere else on the spectrum, you should expect the individuals you elect to the highest offices in the land to understand foreign affairs, domestic policy, human decency, and – although George W certainly pushed this one to its limits, and let’s not even get into Palin – for God’s sake, be able to complete a fucking sentence.

I think I’m just going to start putting this at the bottom of every post from now until election day. Because I’m serious y’all, Trump is a really dark, really low point in our nation’s history. Come on America, we can do better than this. Can’t we?

20 thoughts on “Convents and Kittens”