Well Saturday was both the most awesome and the most disappointing grocery store trip ever.

First of all, I noticed as I pulled into the parking lot that it was exceptionally crowded. It was 1 PM on a Saturday, true, but I’ve been at this Kroger plenty of times during that part of the day and never seen quite as much traffic as I saw this time. Then I noticed this: 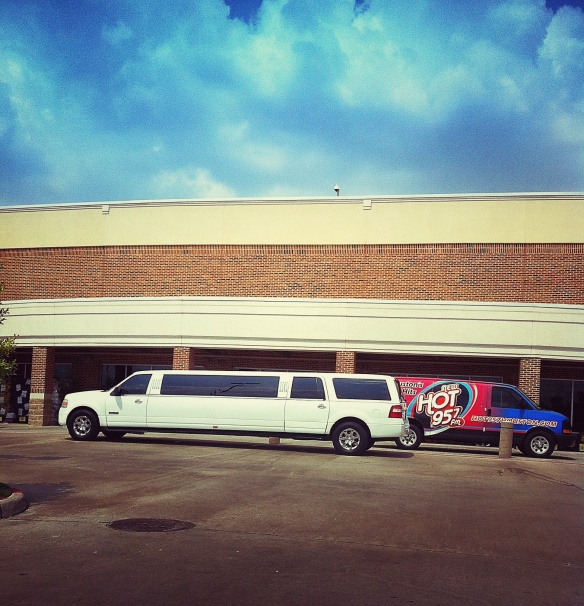 And I knew something was up.

The entrance to the store was all decked out in football regalia, which is not unusual for any day in Texas this time of year.

There’s a hint in that placard, if you can read it. My photos were particular crappy this time out.

Now, generally, this is how I approach all things football:

In fact, I know so little about my city’s own team that I actually thought this guy was one of our players, based on the simple fact that there was a lot of football stuff around, he was a rather big dude, and a few people in fan jerseys were talking to him – but I guess I was wrong. 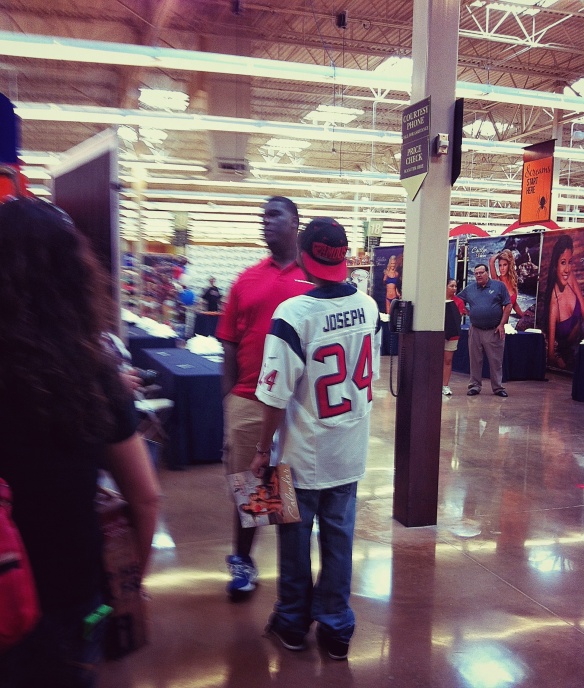 Can you see what the little guy is holding? YEP.

Whatever was going on involved a pretty long line, which snaked around and inconveniently blocked the aisles of toiletries: 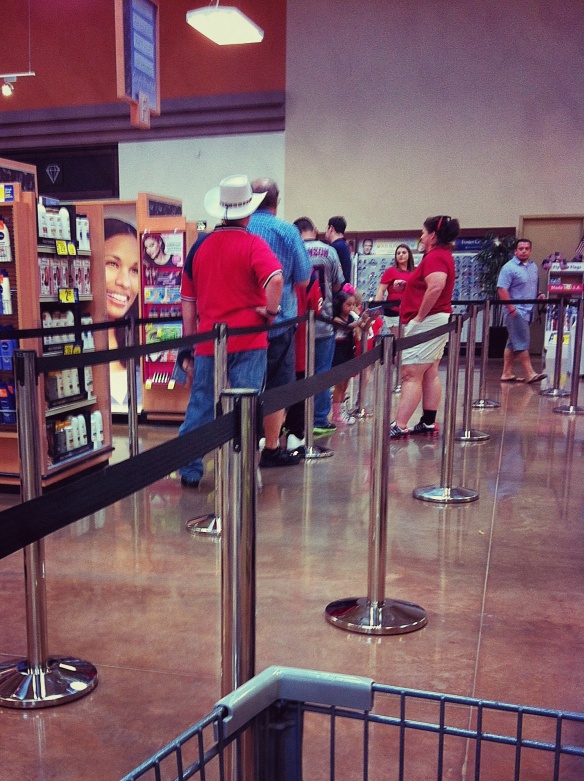 Notice that woman in the red shirt & khaki pants guarding the line? She’s one of many who ruined what could have been the most awesome grocery day ever.

In case you haven’t guessed yet, the team’s cheerleaders were at my grocery store today to sign copies of their calendar for fans. Cheerleaders! In tight sparkly silver shorts! And silver go-go boots! With super-long stick-straight hair extensions and awesome spray tans! SCORE! How could my attempts to take entertaining, super-cheesy grocery store photos get any better than this? I swear all these photos are so blurry because I was trembling with joy at the opportunities I briefly envisioned. That is until the FIRST Kroger employee eyed me suspiciously while I whipped out my cell phone. Hm, I thought, that’s unusual. Usually no one thinks twice about a woman on her phone in the grocery store.

Then of course I noticed all the guards and cops and the over-abundance of store employees gathered about, trying to prevent anyone from taking photos of the cheerleaders for free. Damn! Try as I might, and as stealthily as I tried to wander the aisles, looking for some crack or crevice in their makeshift staging area that wasn’t guarded by an eagle-eyed individual, this is the ONLY shot I could get of them without buying a calendar and standing in line, and yeah, it’s pretty disappointing: 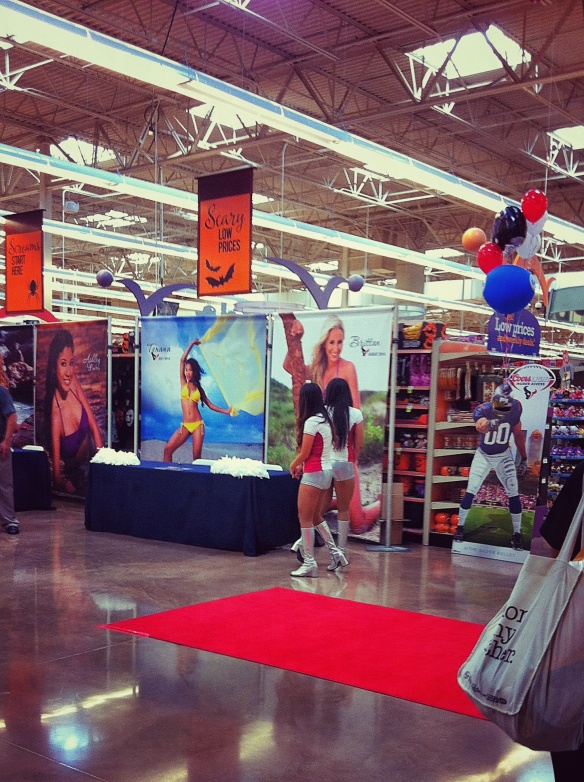 I tried to circle around a bit and get something better, but they were totally onto me. I eventually started to feel like a pervert so I went about my business, completely uninterested in taking any other photos for the rest of the day. When you miss the opportunity to get pics of grown women dressed in cheerleader gear in front of the baby wipes aisle, well, nothing is really gonna get you over that level of disappointment but time. I’m not over it yet, but I’m getting there.

Grocery store time again! I told myself I was going to a different grocery store because it was closer to some other stops I had to make, but truth be told I was hoping to get  more pics for the blog and thought a different location might yield more results. Turns out I was wrong about that because not much in this particular store caught my eye. I did manage to snap a few shots, though:

Things started picking up a bit when I zeroed in on all those little add-on geegaws that hang from the shelves all over the store. Like this for example – I love how these “Glam Gloves” reach glamorously down for a roll of toilet paper. In defense of rubber-glove glam, I believe the toilet paper was two-ply with aloe: 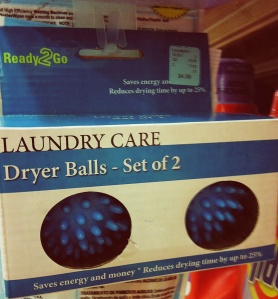 When your dryer lacks a pair

Then this one really got the adolescent giggling going:

You can find this in the aisle marked “Late Night.”

Now, I get the eco-friendly functionality of this next item, but the “Before” graphic really did me in:

Dude, just EMPTY THE BIN already. Plus the “After” bin is totally empty, so I call foul

After mis-reading the label here I immediately whipped out my iPhone to Google what, if any, new piece of Save-Texas-Women-From-Their-Own-Feeble-Minds-and-Naughty-Lady-Bits legislation might had been passed overnight to mandate such an ESSENTIAL item: 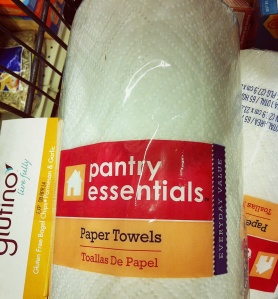 Once I got that straightened out, it was time to pack up and leave. But not before this happened: 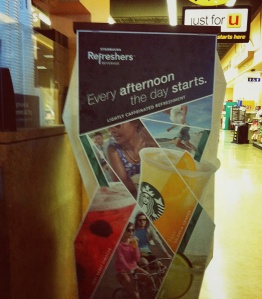 Hard to argue with the logic here

I actually saw this one on my way out the door but chose to pass it by as I’d already put up my phone and had a cart full of groceries to deal with, plus it was in a high traffic area and stopping to snap it would have jammed up the customers.  But  by the time I’d loaded everything into my trunk it was bothering me so much not to photograph it that I went back inside to get the picture. On top of all this, the store had Coke 12-packs on sale for buy 2 get 1 free, and there was Blue Bell Chocolate Chip Mint ice cream in abundance so overall, I’d consider this trip a success.