A few more photos from my recent portrait session here, but first, I have to mention the spike in traffic I saw on my blog yesterday. Keep in mind that for me, a spike in traffic means I went from about 30 views a day to almost 200, so overall I still don’t need to quit my day job or anything, but what the hell, it was still a big jump over my usual numbers. What did it was the Stitch Fix people finding my blog post from yesterday, and creating a pin on Pinterest of one of my photos (the one with the aztec cardigan). The Pin sent people to my blog to check it out, and here’s what happened to my stats:

I think you can tell where the spike is (and no laughing at those sad numbers, BTW). Always interesting when something like that happens, so I thought I’d mention it. Moving on to the shots – I have three more self-portraits to share, all taken after I’d starting destroying my costumery and makeup: 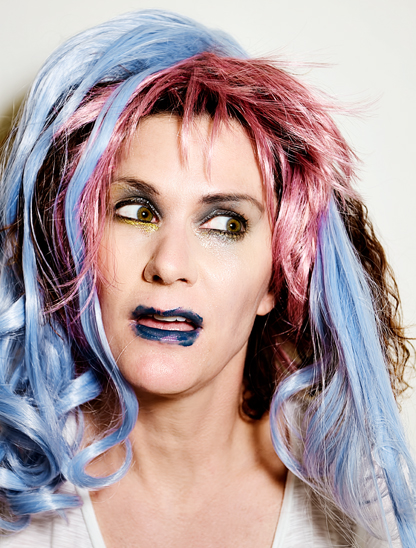 I edited the hell out of this one to reduce my skin tones and up the contrast; not sure I like the way it came out but at least it was something different.

I like this one better, and as I mentioned in my previous post about these shots, I really liked how cutting a hole in the top of the wig and pulling my own hair through it worked. It almost does look like a dye job on my actual hair instead of a wig (or half-wig as the case may be – and yes, half-wigs do exist. They just don’t work at all like this one). The last one utilizes these great costume glasses I got off Amazon a while back – in my current Sopranos-obsessed state they reminded me of Junior Soprano: 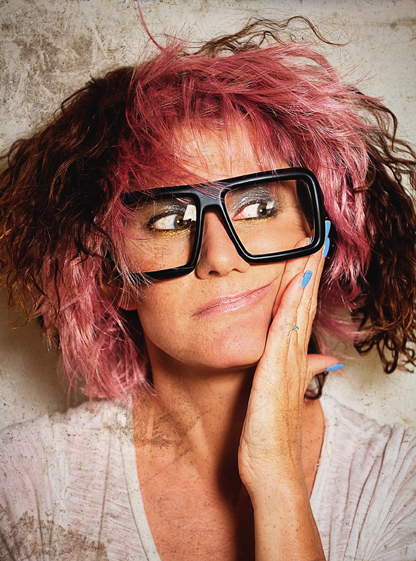 I Rad-Labbed and Dirty-Picture’d the hell out of this one to bring the light down and add some interest. I think it worked out well.

Speaking of glasses, I ordered new ones for my day-to-day life this afternoon and will of course take pictures of them when they come in. Oh and I’ve also discovered the joys of toeless socks, so I’ll have to write about that sometime too, won’t i? There is nothing I won’t write about here, after all, so please try not to go giddy with anticipation waiting for my yoga sock review. Happy Friday everyone!

I’d been eyeing this skirt at my new obsession, Free People, for about two months and finally decided to buy it Monday morning. Then I decided to try some levitation shots in it, since a Flickr friend was complaining (jokingly) about my lack of self-portraits lately and I thought I could show you all the fabulous skirt. Unfortunately, the levitation stuff didn’t work out at all. It’s difficult for me to get the color balance to match when I am using a white background; much more difficult than when I’m using the black, and try as I might I could not get a decent composite shot at all. I did my best to process a few of my attempts anyway, but they aren’t very good. Still, you can get a gander at the skirt if nothing else:

After the disappointing results I got with those, I decided to take older photos I’ve not yet uploaded to my Flickr account and re-work them by running them through RadLab. Every time I process a shot, I save a copy in a file I’ve titled “To Be Uploaded,” and it’s gotten ridiculously full lately. Since I have some pretty old stuff sitting in that file right now, I decided to see if I could turn any of it into something I might actually want to go ahead and share on Flickr.

This was one of the shots I did back when I was just learning how to smooth skin in photoshop; I think I took it with my telephoto lens when it was new. I also edited two shots from my pink fuzzy sweater set I did back in November of last year:

I added a lot of light and contrast to this one; still not sure I like it any better than I did before, which clearly wasn’t much as it’s still sitting in the To Be Uploaded file.

This next shot has always miffed me. I really liked the pose and composition of the shot, but the picture itself lacked punch. I went ahead and converted to B&W when working with it, since the color seemed to be working against it, and after further RadLabbing I think it actually works now: 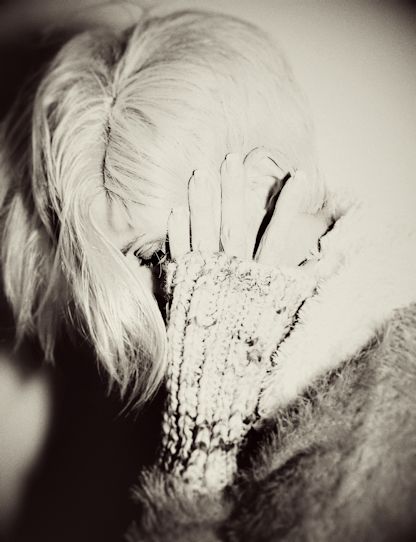 Also, I have a bunch of shots left from when I got that $16 space dress, because I managed to make myself look really good in that thing so I processed a ton. I’ve never uploaded all of them, though, because how many shots of me in a curly wig and a space dress does anyone need to see? But to give myself an excuse to upload another one, I ran it through the Dirty Pictures filter to add some texture – I thought this texture really worked with the off-center stance I had here:

And last but not least, I used both RadLab and Dirty Pictures on this last shot, which was taken when I was testing out a snood on my Speedlite:

Not sure I like this one all that much, but still, it was fun to re-work some old stuff and RadLab makes it very easy. I paid $150 for the plugin, but it was worth it. I may go through the To Be Uploaded folder again tomorrow and see what else I can improve (or destroy as the case may be). Happy Tuesday everyone!