As I’ve mentioned before, it cracks me up a little when people make comments about how graceful or fit I must be to create some of the photos I do. I can assure you that is not the case. I can also assure you that for every near-perfect capture of my body in motion, there are at least two that capture my body in a state of calamity. I’ve thought for awhile that I’d like to share some of those photos; I just never had time to process any until today.

I actually was a little disappointed looking through my sets for awkward poses, as there weren’t nearly as many truly amusing ones as I thought there would be. Not that there weren’t a lot of bad shots (I usually take around 300 per shoot), but most of them were too typical to  be useful to me – stuff like blinking when the shutter clicks, for example. I wanted to find some flops that were particularly interesting, and those were hard to come by. Most of them were just boring, but I did manage to scare up a few before I had to go do laundry or whatever it was that took me away from the project. I’m going to keep looking and share more later if possible.

This first one did actually make me laugh out loud, though:

I don’t even know what I was trying to do here.

This next one happens a lot – a great shot ruined by an awful face. Always gotta watch out for those facial expressions: 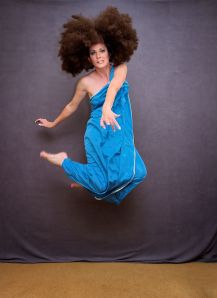 This is just one example of a poorly timed shot, where the shutter caught me landing rather than leaping. I have so many of these it was hard to pick one; I thought this shot looked particularly uncoordinated so I went with it.

This next one comes courtesy of the synthetic wig hair that blew into my eye right before the shot. 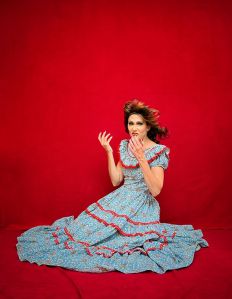 If you’ve never had wig hair in your eye, you really should experience it. Just don’t take a picture when it happens.

This is an example of the problems inherent in trying to actually do what you want the photo to show you doing. When I take a picture that appears to show me spinning, I am not spinning in actuality. What I do is set my  pose to how I want it to appear in the shot, then just reach down and spin my skirt and toss my hair as the shutter goes off. If I try to actually spin, the end result is something like this:

It looks as if I am storming off my own set.

And here’s how a shoot progresses if you don’t remember to comb your wig every few shots: 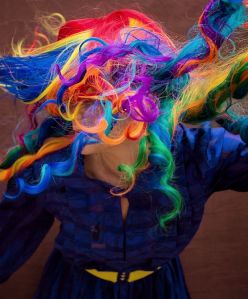 Be kind to your wigs, kids.