Since yesterday’s post was all shots of Candace, today I’ll share some photos of Tamara, the other model from Monday’s shoot. But first I want to share one of Candace I forgot to share yesterday:

There was the slightest bit of color in those trees, so Candace tried her best to trudge through the weeds and stand in front of them; this angle was the only one I could get to and manage to get any of the purple buds in the shot. It’s weird, but I kind of like it. Moving on now to Tamara: 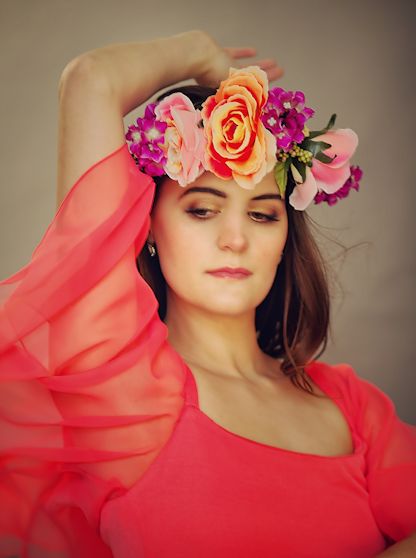 There’s the big-ass hair wreath I got for a steal off Etsy; it matched this old ball gown nicely. The sleeves on this dress absolutely make it; they are long and light and flowy and take wonderful photos, so I blew the fan on her and told her to just wave her arms around while I took some shots. 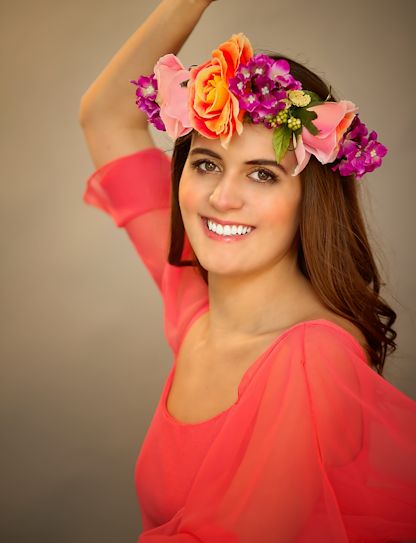 I did less processing to this second shot, although I still did some – I kept the color more true to the original though, and didn’t use any filters. I rarely smile in my own shots as I tend not to look natural when smiling for a camera, so I’m always glad to get a nice shot of someone with a lovely smile – and this one came out great.

I also loved this next one, but it came out a bit yellow in spite of my ExpoDisc, and try as I might I couldn’t correct it without something else going wrong, color-wise:

Notice this one was taken on the fabulous front porch I was so excited to use. Another thing you’ll probably notice is that I barely took any shots using it. There are a few reasons for that: first of all, when I got to the space the woman working there informed me that they actually don’t allow any outside shooting due to liability issues. I guess my disappointment was evident, because she ended up agreeing to let me shoot on the porch as long as I didn’t tell anyone (which of course I just did, oops), but quite honestly after shooting inside for two hours I was pretty burned out and not all that excited about using the porch – I’m sure the fact that I knew we weren’t supposed to shoot out there probably affected my attitude as well, as I am generally a rule-follower and wasn’t anxious to go take pictures somewhere I wasn’t supposed to. The other reason was that the night before the shoot a slight cool front blew in, and it was a little cold outside, so Tamara wasn’t all that game for hanging out on the porch anyway. In the end, this is one of the few shots I took out there that I liked, but I really loved it, in spite of the yellowness.

Right at the end of the shoot, Tamara pulled a prop chair onto the set and just started posing in it very spontaneously, which I liked but unfortunately most of the shots are a mess because I was just sitting on the floor and feeling tired and sloppy so the framing is all wonky. This one came out great, but in looking over it now, I think I may have overprocessed it:

I thought there was something interesting about this shot, her expression is stern in a very vintage way, but the pose is so relaxed; I really liked the contrast. Also proud of the fact that her boots were actually black, but I managed to tint them dark blue without it being obvious. Oh, and throughout the shoot she was complaining about her being too flat, so I actually fluffed it up using some Photoshop trickery. Here’s the pre-Pixlr’ed version, though, which I’m starting to think I like better: 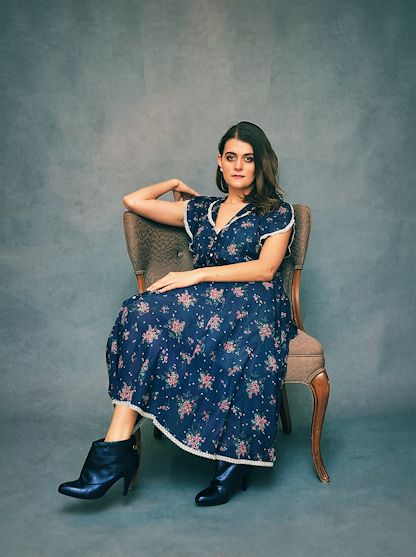 In looking the two over now, I think the Pixlr version has too much going on. What do you think?