I’m not going to go on about my new Canon SL1 again, I’ll just share a few photos to show pics with the 55-250mm I bought for it.

This is an EF-S lens, so I thought meant I wouldn’t be able to use it with my 7D, but apparently I can. I’m not sure why I would do that, though, when I already have the L-series telephoto to use with it; I guess it could come in handy if I need a zoom but the weight of the L-series becomes too heavy. Other than that, the real reason for this one was to have a zoom lens for the SL1 – it definitely adds weight but overall the Rebel still feels light with it on.

I have to agree with people who comment on the cheap-ish feel of this lens, but once I just put the thing on the camera and start shooting with it I can get over it. It only put me out $180 so what else should I expect but lots of plastic, which on the upside keeps the weight down. And it took pretty nice photos as well. 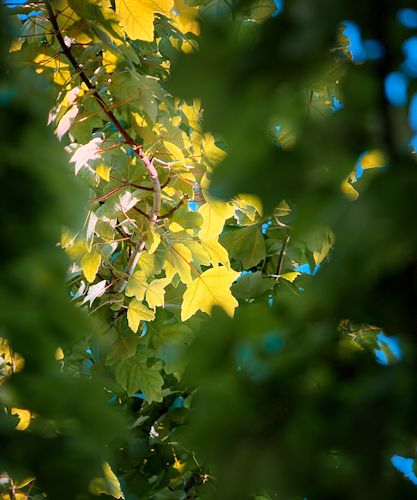 Since all I did was wander around the backyard again, I don’t have a whole lot of thrilling pics to share. I mostly just wanted to test it out and see if it would work – which it will. The last photo I’ll share is one showing the maximum zoom, I took it of a bird’s nest (or something, I think it’s a bird’s nest but what the hell do I know about nature) in one of our front yard trees; the shot on the left is at 55mm while on the right the lens is at 250:

So there it is – the new toy is fully loaded and ready to roar. I took it up to the school again today and used it to shoot some portraits of our head football coach, who won the Coach of the Year award for our school’s division. It performed beautifully, and if I’d remembered to send myself a copy of the picture I’d share it with you here, but I did not. So you’ll have to trust me when I say it took fabulous shots.

The students’ last day of school was today, so tomorrow will be interesting; just all of us winding down and transitioning into summer. There’s a faculty party tomorrow night but I never, ever attend social events at the conclusion of the school year. I’m already done, and prefer to go straight home after the last day and rest rather than spend yet more time talking to people with whom I work. I’m just never in the mood for it. So hopefully I can get some more pictures done soon – I’m wanting to get dressed up and levitate again, but just haven’t had the time these past few weeks. I bought a few vintage pieces I’d like to try on and try out, but they may have to wait awhile longer.