Stupid title, but it’s a play on Pier 1, which is where I got all these props. Moving on.

My initial plan was to wear one of my silvery gray wigs in this getup, but it ended up getting tangled in the garland so I put a thick silver headband on my head, on top of my wig cap, and pinned the poinsettias to that instead. Ended up working out great; I forget how much more difficult long wigs make taking self-portraits. They’re a bit hot under the lights, they get in the way constantly (snagged up in the costume or in my eyes while I’m trying to see what I’m doing or set up a shot), plus they tangle a lot when I’m flinging them around. Believe it or not, having 4 poinsettias clipped to my head was actually easier than putting on one wig! And yes, the poinsettias came with clips attached – I’m sure they are meant to clip to Christmas tree limbs or something, but that’s why i snatched them up, because I knew they’d be super-easy to pin to my head. And they were, except on one of them the clip broke off after about 20 minutes – kinda chintzy for a $5 decoration if you asked me, but then again, I’ve always found Pier 1 to be overpriced. Moving on.

I was on my way to the register with some other stuff when I spied this white, sparkly garland shoved into a basket and snagged it instead. It was really fun to work with and created some very cool looks – the downside was that it was terribly itchy (then again, it wasn’t created to be worn by a human, so there you go). I loved the shots I got with these props, so much so that I’ve already edited – including the pics I shared yesterday – ten shots! That’s way more than I usually process from a shoot where I didn’t change costumes all that much. But the garland really added interest to the photos, and I found myself struggling to decide which shots to process.

Remember when I said yesterday how I changed the colors up in every shot? Here I went for an icy blue that’s probably more green than I inteded.

When deciding what shots to edit, I try to find pictures where either my pose or facial expression isn’t so typical, but I do just have one face, after all, and I do tend to make the same faces over and over (which I discussed in a previous post). I think this is where the props can help a lot; to add some visual interest to the photo besides my face. I had very similar expressions going on in all the shots I took with the garland (about 200, in case you wanted to know), but the garland created a lot of interesting shapes and was fairly easy to manipulate. In fact, I totally want to work with it again – it’s very sturdy, and the wires are thick and strong so I can move it into a shape and it will hold it for several poses before it starts to collapse. I could have done a lot more, but as I said, it was terribly itchy and my skin was starting to get irritated, so I had to stop playing around. Plus, there’s only so many shots I need of me in this particular look with the same garland no matter how much I can manipulate it, so I figured I’d stop while I was ahead and leave more to the imagination for a future shoot where I can look completely different. 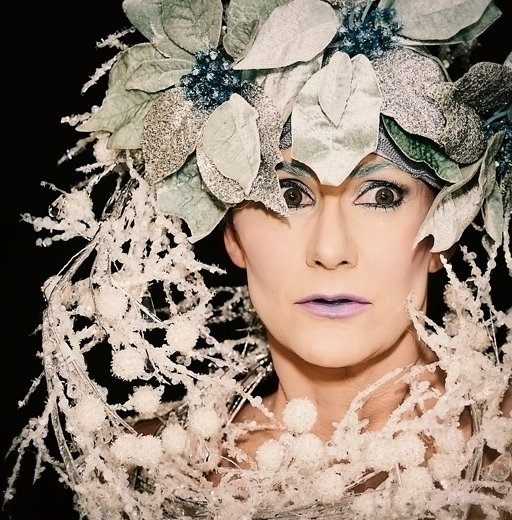 As far as the technical stuff, to change things up a bit I used my 70-200 telephoto lens that I normally reserve for plane shots in this shoot. There was no real reason for this other than wanting to try something different and see how the photos turned out; it was nice to have more room to work with while I posed since I could keep the tripod pulled quite far back instead of needing to keep it closer with my 50mm or 85mm prime lenses, but I didn’t get the lovely focus and camera blur those lenses would have provided. Still, it did a good job and for the most part  the auto-focus was dead-on – easier than either one of the prime lenses, in fact, but I guess that finicky focus is why they create such nice portraits in the first place. Another benefit I’d never considered was that I could stand much farther away from the black backdrop, so there was very little light from the flash reflected in it to alter the solid black effect – another thing I probably should have known by now but never did.

Because I used my Flash Bender on my Speedlite for this shoot, I got a lot of sharp, strong shadows that created some nice black and white shots as well, so there’s quite a few I converted to B&W when processing. I also kept my cheap ring light handy (and managed to knock it over and break it as well, so it’s time to buy another one of those) and for the most part had it set up behind me on a tripod to give my head and shoulders a bit of an outline against the black backdrop; occasionally I also placed it right in front of me to get some catchlights in my eyes. Unfortunately, in some of the tighter close-up shots the ring light tends to create a lot of chromatic aberration that I forgot to edit out (you can see it in the close-up shot from yesterday and the one above), and my eyes came out looking a little pink. I may go back and edit that before uploading to Flickr, but for the blog, pink eyes it is. And by the way, super-easy Photoshop technique for fixing chromatic aberration is located here – a two-minute YouTube tutorial that is simple as pie to do. Has saved my butt on many occasions when working with bright lights and getting all those purple rings around high-contrast areas.

These next few are pretty experimental and I don’t care for them quite as much as the more straightforward shots, but there was so much I wanted to work with here and I started feeling the need to change things up a bit.

When this shot was taken, the Speedlite failed to go off, so the resulting photo was really dark. This happens several times throughout any shoot, and sometimes I try to process one of the pics to see if anything interesting can come of it. Usually nothing does, and I don’t think this one is very successful either. I pulled it into Pixlr to try and generate some added interest, and honestly I can’t remember what all I did to it there, but in the end, I still don’t think I like it very much. But hey, I tried.

Mostly I just liked the way the garland was framing my face here; this is another shot I Pixlr’ed like crazy, but I think it worked better here. I used some of their graduated color filters as well as a space filter to make the costume sparkle; I just discovered that Pixlr’s desktop app can utilize masks so I was able to apply the stars without having to add them to my face, which is cool. I love textures and filtered effects, but for the most part I don’t like them to muck up faces, and it’s nice to be able to erase that out now.

Well, that’s probably all I have from this shoot, although I have one or two more I’m still eyeing. But I pretty much marathon-edited this weekend, partly because I had the time, and partly because it’s been a long time since I just worked with portraits and had forgotten how much fun it is. Busy week coming up at work – the week before any vacation is always stressful, and this one is shaping up to be the same, so I may be MIA until the holiday starts next weekend. Happy Monday everyone!

9 thoughts on “Peer One Portraits”