I just checked my blog, and I haven’t shared any photos here since December 21st – but I certainly have a taken a lot of them! The first day of the break, I pulled all the furniture out of my office and just left it set up for photos the entire two weeks, so I could be basically ready to go whenever I wanted to do a shoot. It was a good plan, and I took a load of photos, many of which I’ve yet to process. But I’ll share what I can for now.

As you know from my recent posts, I bought a slew of dolls, in varying conditions, from eBay with the intent of taking pictures of them. I shared the first few in my last post, so going back to that, here are some photos I took of one of the headless dolls I received:

This a favorite of mine; I simply stood the doll up on the old brown chair that’s in my office and played around with her a bit. I love the yellow, black and white of the dress, especially against the brown, and of course there’s the whole headless thing. I edited the doll’s feet (and the base of stand she was on) so it would look like she’s floating. It was pretty successful even SOOC, but of course I messed with it in Photoshop quote a bit. I would talk more about exactly what I did, but I’m tired quite honestly, and can’t formulate my thoughts all that well. So I’ll keep my comments brief.

I do also love this shot. Also taken just sitting on my chair. I desaturated most of the shot for a vintage feel, and added a little texture to age it also. 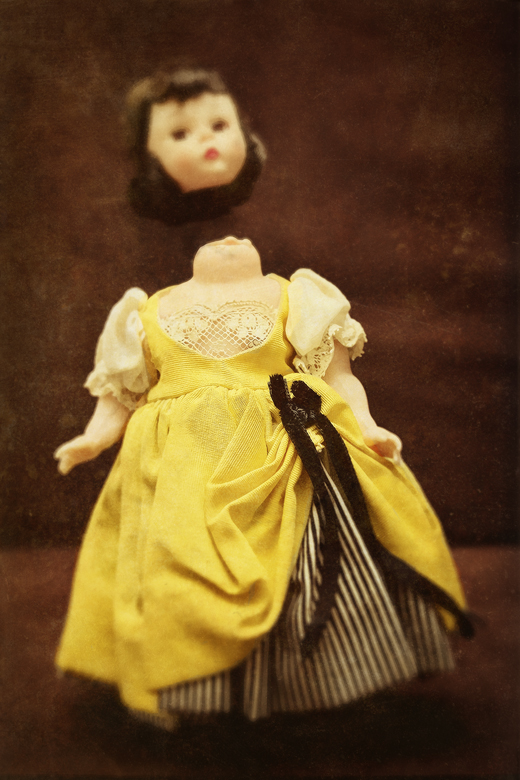 Not really interested in this one and probably won’t share it anywhere else but here. I thought I could composite a floating head shot into the set, but I popped off these shots quickly and didn’t take the time to get a floating head I could really use. I settled for this one, but I don’t really think it works. The head is at an odd angle, and I hadn’t yet discovered the transform tool in Photoshop that I now know how to use, and that helps to change the angles of a layer if you don’t like how it’s aligned in the photo.

I really tried to get a photo of either Sprocket or Penny with the doll head in their mouths, but they weren’t having it. This is as close as I got. Also the color balance was wonky in these shots, so I just gave this one a monochrome treatment and called it a day. Then of course, there’s my new baby doll Sherbet:

This was from a different shoot, utilizing my backdrop and better lighting. I thought this shot had nice lighting but was rather boring; in the end it’s just a doll. So I messed with it – a lot. And the end result was a little disturbing.

Creepy enough for you? What I did was warp just his face, and added a light leak to conceal a little the transition line on his face between where I used the warp tool and where I didn’t. Not sure I like it, but I bought Sherbet to be creepy, so in that regard at least he did his job.

Another one where I liked the light a lot, but it’s just…doll. So I added some tilt-shift and motion blur in the hopes of making it more interesting. Not sure I succeeded, so let’s move on. Speaking of creepy: 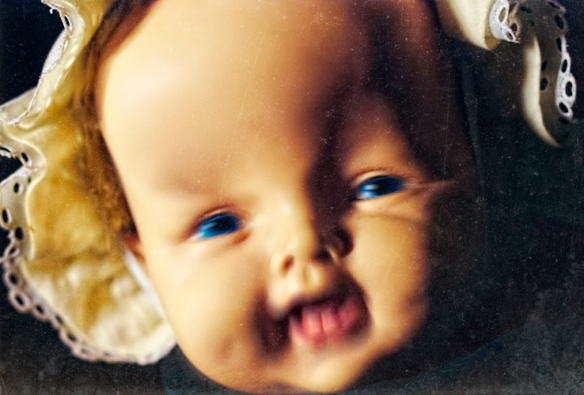 More warping! Not really sure how successful Sherbet’s first photoshoot was, but at least I got some good experience out of it. I also don’t know if he’s going to work for my project taking a doll around with me on errands and things and putting him into an otherwise mundane photo. He’s really BIG, and I think to pull off taking pictures of dolls at random places in public the doll in question should be a lot smaller. So, I’m going to keep looking for that. Not sure what to do with Sherbet in the meantime, but I’m sure I’ll come up with something.

I’m going to stop here because it’s late and I’m sleepy, but I’ll have more doll photos to share soon. And another bag I spruced up.

Happy Sunday everyone! I’m back to the grind on money, but I’m OK with it. All good vacations must come to an end.